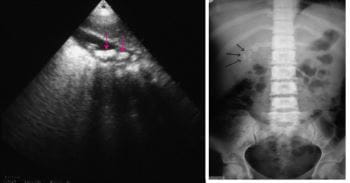 Overview of Gallstones
Cholelithiasis is the presence of one or more calculi (gallstones) in the gallbladder. In developed countries, about 10% of adults and 20% of people > 65 years have gallstones. Gallstones tend to be asymptomatic. The most common symptom is biliary colic; gallstones do not cause dyspepsia or fatty food intolerance. More serious complications include cholecystitis; biliary tract obstruction (by stones in the bile ducts [choledocholithiasis]), sometimes with infection (cholangitis); and gallstone pancreatitis. Diagnosis is usually by ultrasonography. If cholelithiasis causes symptoms or complications, cholecystectomy is necessary.

Biliary sludge is often a precursor of gallstones. It consists of calcium bilirubinate (a polymer of bilirubin), cholesterol microcrystals, and mucin. Sludge develops during gallbladder stasis, as occurs during pregnancy or use of total parenteral nutrition. Most sludge is asymptomatic and disappears when the primary condition resolves. Alternatively, sludge can evolve into gallstones or migrate into the biliary tract, obstructing the ducts and leading to biliary colic, cholangitis Choledocholithiasis and Cholangitis Choledocholithiasis is the presence of stones in bile ducts; the stones can form in the gallbladder or in the ducts themselves. These stones cause biliary colic, biliary obstruction, gallstone... read more , or pancreatitis Overview of Pancreatitis Pancreatitis is classified as either acute or chronic. Acute pancreatitis is inflammation that resolves both clinically and histologically. Chronic pancreatitis is characterized by histologic... read more .

There are several types of gallstones.

Cholesterol stones account for > 85% of gallstones in the Western world. For cholesterol gallstones to form, the following is required:

Brown pigment stones are soft and greasy, consisting of bilirubinate and fatty acids (Ca palmitate or stearate). They form during infection, inflammation, and parasitic infestation (eg, liver flukes in Asia).

Gallstones grow at about 1 to 2 mm/year, taking 5 to 20 years before becoming large enough to cause problems. Most gallstones form within the gallbladder, but brown pigment stones form in the ducts. Gallstones may migrate to the bile duct after cholecystectomy or, particularly in the case of brown pigment stones, develop behind strictures as a result of stasis and infection.

Symptoms and Signs of Cholelithiasis

About 80% of people with gallstones are asymptomatic. The remainder have symptoms ranging from a characteristic type of pain (biliary colic) to cholecystitis to life-threatening cholangitis. Biliary colic is the most common symptom.

Stones occasionally traverse the cystic duct without causing symptoms. However, most gallstone migration leads to cystic duct obstruction, which, even if transient, causes biliary colic. Biliary colic characteristically begins in the right upper quadrant but may occur elsewhere in the abdomen. It is often poorly localized, particularly in diabetics and older patients. The pain may radiate into the back or down the arm.

Episodes begin suddenly, become intense within 15 minutes to 1 hour, remain at a steady intensity (not colicky) for up to 12 hours (usually < 6 hours), and then gradually disappear over 30 to 90 minutes, leaving a dull ache. The pain is usually severe enough to send patients to the emergency department for relief. Nausea and some vomiting are common, but fever and chills do not occur unless cholecystitis has developed. Mild right upper quadrant or epigastric tenderness may be present; peritoneal findings are absent. Between episodes, patients feel well.

Although biliary colic can follow a heavy meal, fatty food is not a specific precipitating factor. Nonspecific gastrointestinal symptoms, such as gas, bloating, and nausea, have been inaccurately ascribed to gallbladder disease. These symptoms are common, having about equal prevalence in cholelithiasis, peptic ulcer disease Peptic Ulcer Disease A peptic ulcer is an erosion in a segment of the gastrointestinal mucosa, typically in the stomach (gastric ulcer) or the first few centimeters of the duodenum (duodenal ulcer), that penetrates... read more

Little correlation exists between the severity and frequency of biliary colic and pathologic changes in the gallbladder. Biliary colic can occur in the absence of cholecystitis. If colic lasts > 12 hours, particularly if it is accompanied by vomiting or fever, acute cholecystitis or pancreatitis is likely.

Gallstones are suspected in patients with biliary colic. Abdominal ultrasonography is the imaging test Ultrasonography Imaging is essential for accurately diagnosing biliary tract disorders and is important for detecting focal liver lesions (eg, abscess, tumor). It is limited in detecting and diagnosing diffuse... read more

Laboratory tests usually are not helpful; typically, results are normal unless complications develop.

Asymptomatic gallstones and biliary sludge are often detected incidentally when imaging, usually ultrasonography, is done for other reasons. About 10 to 15% of gallstones are calcified and visible on plain x-rays. 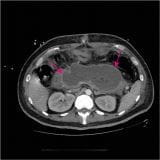 Most asymptomatic patients decide that the discomfort, expense, and risk of elective surgery are not worth removing an organ that may never cause clinical illness. However, if symptoms occur, gallbladder removal (cholecystectomy) is indicated because pain is likely to recur and serious complications can develop.

Surgery can be done with an open or a laparoscopic technique.

Open cholecystectomy, which involves a large abdominal incision and direct exploration, is safe and effective. Its overall mortality rate is about 0.1% when done electively during a period free of complications.

Laparoscopic cholecystectomy is the treatment of choice. Using video endoscopy and instrumentation through small abdominal incisions, the procedure is less invasive than open cholecystectomy. The result is a much shorter convalescence, decreased postoperative discomfort, improved cosmetic results, yet no increase in morbidity or mortality. Laparoscopic cholecystectomy is converted to an open procedure in 2 to 5% of patients, usually because biliary anatomy cannot be identified or a complication cannot be managed. Older age typically increases the risks of any type of surgery.

Cholecystectomy effectively prevents future biliary colic but is less effective for preventing atypical symptoms such as dyspepsia. Cholecystectomy does not result in nutritional problems or a need for dietary limitations. Some patients develop diarrhea, often because bile salt malabsorption in the ileum is unmasked. Prophylactic cholecystectomy is warranted in asymptomatic patients with cholelithiasis only if they have large gallstones (> 3 cm) or a calcified gallbladder (porcelain gallbladder); these conditions increase the risk of gallbladder carcinoma Tumors of the Gallbladder and Bile Ducts Gallbladder and bile duct tumors can cause extrahepatic biliary obstruction. Symptoms may be absent but often are constitutional or reflect biliary obstruction. Diagnosis is based on ultrasonography... read more .

For patients who decline surgery or who are at high surgical risk (eg, because of concomitant medical disorders or advanced age), gallbladder stones can sometimes be dissolved by ingesting bile acids orally for many months. The best candidates for this treatment are those with small, radiolucent stones (more likely to be composed of cholesterol) in a functioning nonobstructed gallbladder (indicated by normal filling detected during cholescintigraphy Cholescintigraphy Imaging is essential for accurately diagnosing biliary tract disorders and is important for detecting focal liver lesions (eg, abscess, tumor). It is limited in detecting and diagnosing diffuse... read more

or by absence of stones in the gallbladder neck).

Ursodeoxycholic acid 4 to 5 mg/kg orally twice a day or 3 mg/kg orally three times a day (8 to 10 mg/kg/day) dissolves 80% of tiny stones < 0.5 cm in diameter within 6 months. For larger stones (the majority), the success rate is much lower, even with higher doses of ursodeoxycholic acid. Further, after successful dissolution, stones recur in 50% of patients within 5 years. Most patients thus prefer laparoscopic cholecystectomy. However, ursodeoxycholic acid 300 mg orally twice a day can help prevent stone formation in morbidly obese patients who are losing weight rapidly after bariatric surgery or while on a very low calorie diet.