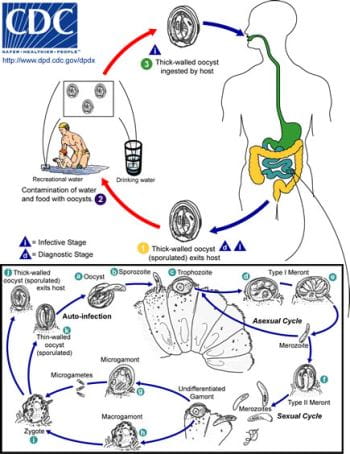 Cryptosporidium life cycle
Cryptosporidiosis is infection with the protozoan Cryptosporidium. The primary symptom is watery diarrhea, often with other signs of gastrointestinal distress. Illness is typically self-limited in immunocompetent patients but can be persistent and severe in patients with AIDS. Diagnosis is by identification of the organism or antigen in stool. Treatment of immunocompetent people, when necessary, is with nitazoxanide. For patients with AIDS, highly active antiretroviral therapy and supportive care are used; nitazoxanide may improve symptoms, but does not cure infection in persons with untreated AIDS.

Cryptosporidia are obligate, intracellular coccidian protozoa that replicate in small-bowel epithelial cells of a vertebrate host.

Two types of oocysts are produced:

The thick-walled infective oocysts are shed into the lumen and passed in stool by the infected host; they are immediately infective and can be transmitted directly from person to person by the fecal-oral route. Very few oocysts (eg, < 100) are required to cause disease, thus increasing risk of person-to-person transmission.

When the infective oocysts are ingested by humans or another vertebrate host, the cycle begins again.

Cryptosporidium species infect a wide range of animals. Cryptosporidium parvum and C. hominis (formerly C. parvum genotype 1) are responsible for most human cases of cryptosporidiosis. Ingesting even a relatively small number of oocyts can result in disease. Infections result from the following:

The disease occurs worldwide. Cryptosporidiosis is responsible for 0.6 to 7.3% of diarrheal illness in developed countries and an even higher percentage in areas with poor sanitation. In the US from 2009 to 2017, there were 444 reported cryptosporidiosis outbreaks resulting in 7,465 cases in 40 states and Puerto Rico. The number of reported outbreaks increased an average of 13% per year. Leading causes include swallowing contaminated water in pools or water playgrounds, contact with infected cattle, and contact with infected persons in child care settings (1 Epidemiology reference Cryptosporidiosis is infection with the protozoan Cryptosporidium. The primary symptom is watery diarrhea, often with other signs of gastrointestinal distress. Illness is typically self-limited... read more

). In Milwaukee, Wisconsin, > 400,000 people were affected during a waterborne outbreak in 1993, when the city’s water supply was contaminated by sewage during spring rains when the filtration system did not work correctly.

Children, travelers to foreign countries, immunocompromised patients, and medical personnel caring for patients with cryptosporidiosis are at increased risk. Outbreaks have occurred in day care centers. The small number of oocysts required to cause infection, the prolonged excretion of oocysts, the resistance of oocysts to chlorination, and their small size raise concern about swimming pools used by diapered children.

, particularly those who have not received antiretroviral therapy (ART).

Symptoms and Signs of Cryptosporidiosis

The incubation period for cryptosporidiosis is about 1 week, and clinical illness occurs in > 80% of infected people. Onset is typically abrupt, with profuse watery diarrhea, abdominal cramping, and, less commonly, nausea, anorexia, fever, and malaise. Symptoms usually persist 2 to 3 weeks, rarely ≥ 1 month, and then abate. Fecal excretion of oocysts may continue for several weeks after symptoms have subsided. Asymptomatic shedding of oocysts is common among children in developing countries. Cryptosporidiosis is also associated with undernutrition in children living in areas with poor sanitation.

In the immunocompromised host, onset may be more gradual, but diarrhea can be more severe. Unless the underlying immune defect is corrected, infection can persist, causing profuse intractable diarrhea for life. Fluid losses of > 5 to 10 L/day have been reported in some AIDS patients. The intestine is the most common site of infection in immunocompromised hosts; however, other organs (eg, biliary tract, pancreas, respiratory tract) may be involved.

Identifying the acid-fast oocysts in stool confirms the diagnosis of cryptosporidiosis, but conventional methods of stool examination (ie, routine "stool for ova and parasites" testing) are unreliable. Oocyst excretion is intermittent, and multiple stool samples may be needed. Several concentration techniques increase the yield. Cryptosporidium oocysts can be identified by phase-contrast microscopy or by staining with modified Ziehl-Neelsen or Kinyoun techniques. Immunofluorescence microscopy with fluorescein-labeled monoclonal antibodies allows for greater sensitivity and specificity.

Sensitive and specific DNA-based assays for detection and speciation of C. parvum and C. hominis are available.

In immunocompetent people, cryptosporidiosis is self-limited. For severe or persistent infections, oral nitazoxanide is used; the recommended doses, given for 3 days, are as follows:

is key. Nitazoxanide (500 to 1000 mg 2 times a day) for 14 days or longer has been effective in reducing symptoms in adults with CD4 counts > 50/mcL. Symptoms have also abated with effective ART and immune reconstitution.

Supportive measures, oral or parenteral rehydration, and hyperalimentation may be needed for immunocompromised patients with severe disease.

Specific recommendations for the general public and people with compromised immunity due to AIDS or other causes are available from the Centers for Disease Control and Prevention (CDC). Stools of patients with cryptosporidiosis are highly infectious; strict stool precautions should be observed. Special biosafety guidelines have been developed for handling clinical specimens. Boiling potentially contaminated water for 1 min (3 min at altitudes > 2000 m [6562 ft]) is the most reliable decontamination method; only filters with pore sizes ≤ 1 micrometer (specified as “absolute 1 micron” or certified under NSF/ANSI International Standard No. 53 or No. 58) remove Cryptosporidium cysts.