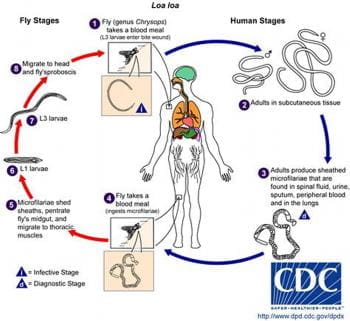 Life Cycle of Loa loa
Loiasis is a filarial nematode infection with Loa loa. Symptoms include localized angioedema (Calabar swellings) in skin and subconjunctival migration of adult worms. Diagnosis is by detecting microfilariae in peripheral blood or seeing worms migrating across the eye. Treatment is with diethylcarbamazine.

(See also Approach to Parasitic Infections Approach to Parasitic Infections Human parasites are organisms that live on or in a person and derive nutrients from that person (its host). There are 3 types of parasites: Single-cell organisms (protozoa, microsporidia) Multicellular... read more and Overview of Filarial Nematode Infections Overview of Filarial Nematode Infections Threadlike adult filarial worms reside in lymphatic or subcutaneous tissues. Gravid females produce live offspring (microfilariae) that circulate in blood or migrate through tissues. When ingested... read more .)

Loiasis is confined to the rain forest belt of western and central Africa. Humans are the only known natural reservoir for this parasite.

is common but nonspecific.

Symptoms and Signs of Loiasis

Most infected people are asymptomatic. Infection can produce areas of angioedema (Calabar swellings) that develop anywhere on the body but predominantly on the extremities; they are presumed to reflect hypersensitivity reactions to allergens released by migrating adult worms. In native residents, swellings usually last 1 to 3 days but are more frequent and severe in visitors. Worms may also migrate subconjunctivally across the eyes. This migration may be unsettling, but residual eye damage is uncommon.

Nephropathy generally manifests as proteinuria with or without mild hematuria and is believed to be due to immune complex deposition.

Loiasis should be suspected in immigrants or travelers who have a history of exposure in an endemic area and who present with eye worms, Calabar swellings, or unexplained peripheral eosinophilia.

Occasionally, the diagnosis of loiasis is confirmed by observing an adult worm migrating under the conjunctiva or by identifying a worm after it is removed from the eye or skin.

Microscopic detection of microfilariae in peripheral blood establishes the diagnosis. Blood samples should be drawn between 10 am and 2 pm, when microfilaremia levels are the highest.

Many serologic tests for antibodies do not differentiate Loa loa from other filarial nematode infections. Loa-specific antibody tests have been developed, but they are not widely available in the United States. A quantitative real-time PCR (qPCR) to confirm the diagnosis and quantify the microfilarial burden is available at the Laboratory of Parasitic Diseases, National Institutes of Health.

People from endemic regions of Africa should be checked for Loa loa before they are treated with diethylcarbamazine or ivermectin for other disorders because these drugs can have substantial adverse effects in people with loiasis. If treated with diethylcarbamazine or ivermectin, people with ≥ 8000 Loa loa microfilariae/mL blood are at risk of potentially fatal encephalopathy, caused by the release of antigens from dying microfilariae.

Treatment of loiasis is complicated. Diethylcarbamazine (DEC) is the only drug that kills microfilariae and adult worms. In the United States, it is available only from the Centers for Disease Control and Prevention (CDC) after laboratory confirmation of loiasis; clinicians should seek expert advice before they initiate treatment, and they should do the following before initiating treatment with DEC:

Clinicians should seek expert assistance when measuring the number of microfilariae and thus determining the severity of the infection.

In heavily infected patients, filarial antigens (released by the microfilariae as DEC kills them) may trigger encephalopathy, leading to coma and death. Patients with ≥ 8000 microfilariae/mL blood are at risk of this effect and may benefit from apheresis or initial treatment with albendazole 200 mg orally twice a day for 21 days; the goal is to reduce the microfilarial load to < 8000/mL before DEC is initiated. Multiple courses of DEC may be necessary.

Patients who have failed ≥ 2 rounds of treatment with DEC may be given albendazole 200 mg orally twice a day for 21 days.

Ivermectin has also been used to reduce microfilaremia, but albendazole is preferred because its onset of action is slower and risk of precipitating encephalopathy is lower.

Diethylcarbamazine (DEC) 300 mg orally once a week can be used to prevent loiasis in long-term travelers to endemic regions.

Using insect repellents (including permethrin-impregnated clothing) and wearing long-sleeved and long-legged clothing may reduce the number of bites by infected flies. Because the flies are day-biting, mosquito (bed) nets do not help.