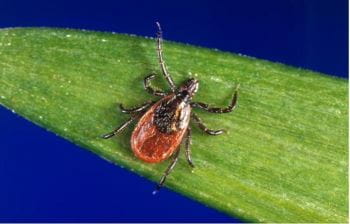 Deer ticks
Ehrlichiosis and anaplasmosis are caused by rickettsial-like bacteria. Ehrlichiosis is caused mainly by Ehrlichia chaffeensis; anaplasmosis is caused by Anaplasma phagocytophilum. Both are transmitted to humans by ticks. Symptoms resemble those of Rocky Mountain spotted fever except that a rash is much less common. Onset of illness, with fever, chills, headache, and malaise, is abrupt.

Ehrlichiosis and anaplasmosis are related to rickettsial diseases.

Anaplasma phagocytophilum (formerly E. phagocytophila) causes human granulocytic anaplasmosis, which occurs in the Northeast, mid-Atlantic, upper Midwest and West Coast of the US, where its arthropod vector (ixodid ticks) is endemic. Lyme disease Lyme Disease Lyme disease is a tick-transmitted infection caused by the spirochete Borrelia species. Early symptoms include an erythema migrans rash, which may be followed weeks to months later by neurologic... read more

and Powassan virus Powassan virus Arbovirus (arthropod-borne virus) applies to any virus that is transmitted to humans and/or other vertebrates by certain species of blood-feeding arthropods, chiefly insects (flies and mosquitoes)... read more have the same tick vector and endemic area, and occasionally patients acquire coinfections after being bitten by a tick infected with more than one type of organism. Several cases of anaplasmosis have been reported after blood transfusions from asymptomatic or acutely infected donors. (See Centers for Disease Control and Prevention: Anaplasmosis–epidemiology and statistics.)

The difference in the primary target cell (monocytes for ehrlichiosis and granulocytes for anaplasmosis) results in only minor differences in clinical manifestations.

Symptoms and Signs of Ehrlichiosis and Anaplasmosis

Clinical features of ehrlichiosis and anaplasmosis are similar. Although some infections are asymptomatic, most cause abrupt onset of an influenza-like illness with nonspecific symptoms such as fever, chills, myalgias, weakness, nausea, vomiting, cough. headache, and malaise, usually beginning about 12 days after the tick bite.

Rash is uncommon in anaplasmosis. Some patients infected with E. chaffeensis develop a maculopapular or petechial rash on the trunk and extremities.

Both infections appear to be more severe and have a higher mortality rate in patients with compromised immunity caused by immunosuppressants (eg, corticosteroids, cancer chemotherapy, long-term treatment with immunosuppressants after organ transplantation), HIV infection, or splenectomy.

Diagnosis of Ehrlichiosis and Anaplasmosis

Blood and liver tests may detect hematologic and hepatic abnormalities, such as leukopenia, thrombocytopenia, and elevated aminotransferase levels.

Treatment of Ehrlichiosis and Anaplasmosis

Treatment of ehrlichiosis and anaplasmosis is best started before laboratory results return. When treatment is started early, patients generally respond rapidly and well. A delay in treatment may lead to serious complications, including viral and fungal superinfections and death in 2 to 5%.

Primary treatment is doxycycline 200 mg orally once followed by 100 mg twice a day in adults until the patient improves and has been afebrile for 24 to 48 hours but is continued for at least 7 days. Chloramphenicol is not effective.

Some patients continue to experience headache, weakness, and malaise for weeks after adequate treatment.

Prevention of Ehrlichiosis and Anaplasmosis

No vaccine is available to prevent ehrlichiosis or anaplasmosis. Measures can be taken to prevent tick bites. (See also Centers for Disease Control and Prevention: Preventing tick bites.)

DEET should be used cautiously in very young children because toxic reactions have been reported. Permethrin on clothing effectively kills ticks. Frequent searches for ticks, particularly in hairy areas and on children, are essential in endemic areas.

Engorged ticks should be removed with care and not crushed between the fingers because crushing the tick may result in disease transmission. The tick’s body should not be grasped or squeezed. Gradual traction on the head with a small forceps dislodges the tick. The point of attachment should be swabbed with alcohol. Petroleum jelly, lit matches, and other irritants are not effective ways to remove ticks and should not be used.

No practical means are available to rid entire areas of ticks, but tick populations may be reduced in endemic areas by controlling small-animal populations.

Overview of Rickettsial and Related Infections

How To Remove a Tick