Last review/revision Dec 2018
View Patient Education
Topic Resources
Hydrocephalus is accumulation of excessive amounts of CSF, causing cerebral ventricular enlargement and/or increased intracranial pressure. Manifestations can include enlarged head, bulging fontanelle, irritability, lethargy, vomiting, and seizures. Diagnosis is by ultrasonography in neonates and young infants with an open fontanelle and by CT or MRI in older infants and children. Treatment ranges from observation to surgical intervention, depending on severity and progression of symptoms.

Hydrocephalus is the most common cause of abnormally large heads in neonates. Hydrocephalus that develops only after the fontanelles have closed does not increase head circumference or cause the fontanelle to bulge but can markedly and rapidly increase intracranial pressure.

Hydrocephalus can result from

It can be either congenital or acquired from events during or after birth.

Obstruction most often occurs in the aqueduct of Sylvius but sometimes at the outlets of the 4th ventricle (Luschka and Magendie foramina). The most common causes of obstructive hydrocephalus are

Aqueductal stenosis is narrowing of the outflow pathway for CSF from the 3rd ventricle to the 4th ventricle. It may be either primary, or secondary to scarring or narrowing of the aqueduct resulting from a tumor, hemorrhage, or infection. Primary aqueductal stenosis may involve true stenosis (forking of the aqueduct into smaller, poorly functioning channels) or presence of a septum in the aqueduct. Primary aqueductal stenosis may be inheritable; there are many genetic syndromes, some of which are X-linked X-Linked Recessive Genetic disorders determined by a single gene (Mendelian disorders) are easiest to analyze and the most well understood. If expression of a trait requires only one copy of a gene (one allele)... read more (thus male infants inherit the condition from otherwise unaffected mothers).

Dandy-Walker malformation comprises progressive cystic enlargement of the 4th ventricle in fetal life, resulting in complete or partial agenesis of the cerebellar vermis and hydrocephalus. It is likely related to a failure of formation of the foramen of Magendie in the fetus. Associated anomalies of the CNS are common, including agenesis of the corpus callosum and heterotopias. Dandy-Walker malformation accounts for 5 to 10% of cases of congenital hydrocephalus.

In Chiari II (formerly Arnold-Chiari) malformation, hydrocephalus occurs with spina bifida Spina Bifida Spina bifida is defective closure of the vertebral column. Although the cause is not known, low folate levels during pregnancy increase risk. Some children are asymptomatic, and others have... read more and syringomyelia Syrinx of the Spinal Cord or Brain Stem A syrinx is a fluid-filled cavity within the spinal cord (syringomyelia) or brain stem (syringobulbia). Predisposing factors include craniocervical junction abnormalities, previous spinal cord... read more 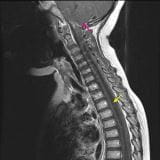 . Significant elongation of the cerebellar tonsils in Chiari I type malformation or midline vermis in Chiari II causes them to protrude through the foramen magnum, with beaking of the colliculi and thickening of the upper cervical spinal cord.

, which are complications of delivery, particularly in premature infants.

Symptoms and Signs of Hydrocephalus

Neurologic findings depend on whether intracranial pressure is increased, symptoms of which in infants include irritability, high-pitched cry, vomiting, lethargy, strabismus, and bulging fontanelle. Older, verbal children may complain of headache, decreased vision, or both. Papilledema is a late sign of increased intracranial pressure; its initial absence does not exclude hydrocephalus.

Diagnosis of hydrocephalus is often made by routine prenatal ultrasonography.

After birth, diagnosis is suspected if routine examination reveals an increased head circumference; infants may have a bulging fontanelle or widely separated cranial sutures. Similar findings can result from intracranial, space-occupying lesions (eg, subdural hematomas, porencephalic cysts, tumors). Macrocephaly may result from an underlying brain problem (eg, Alexander disease or Canavan disease), or it may be a benign, sometimes inherited, feature characterized by an increased amount of CSF surrounding a normal brain. Children suspected of having hydrocephalus require cranial imaging by CT, MRI, or ultrasonography (if the anterior fontanelle is open).

Cranial CT or ultrasonography is used to monitor progression of hydrocephalus once an anatomic diagnosis has been made. If seizures occur, an EEG may be helpful.

Treatment of hydrocephalus depends on etiology, severity, and whether hydrocephalus is progressive (ie, size of the ventricles increases over time relative to the size of the brain). Mild, nonprogressive cases may be observed with serial imaging studies and measurement of head size. To temporarily reduce CSF pressure in infants, ventricular taps or serial lumbar punctures (if the hydrocephalus is communicating) may be used.

Progressive hydrocephalus usually requires a ventricular shunt. Shunts typically connect the right lateral ventricle to the peritoneal cavity or, rarely, to the right atrium via a plastic tube with a one-way, pressure-relief valve. When a shunt is first placed in an infant or older child whose fontanelle is closed, rapid withdrawal of fluid can cause subdural bleeding as the brain shrinks away from the skull. When the fontanelles are open, the skull can decrease in circumference to match the decrease in brain size; thus, some clinicians recommend an early decision regarding shunt placement so that it can be done before fontanelle closure.

In a third ventriculostomy, an opening is created endoscopically between the 3rd ventricle and the subarachnoid space, allowing CSF to drain. This procedure is often combined with ablation of the choroid plexus and is becoming more commonly used in the US. It is particularly useful in less developed countries where access to consistent neurosurgical care is often limited. In certain cases (eg, hydrocephalus caused by primary aqueductal stenosis), third ventriculostomy may be adequate primary treatment.

A ventricular shunt that goes to the subgaleal space may be used in infants as a temporary measure for patients who may not require a more permanent shunt.

Although some children do not need the shunt as they age, shunts are rarely removed because of the risk of bleeding and trauma. Fetal surgery to treat congenital hydrocephalus has not been successful.

The type of ventricular shunt used depends on the neurosurgeon’s experience, although ventriculoperitoneal shunts cause fewer complications than ventriculoatrial shunts. Shunt complications include

Any shunt has a risk of infection. Manifestations include chronic fever, lethargy, irritability, headache, or a combination and other symptoms and signs of increased intracranial pressure; sometimes redness becomes apparent over the shunt tubing. Antibiotics effective against the organism infecting the shunt, which may include skin flora, are given, and typically the shunt must be removed and replaced.

Shunts can malfunction because of a mechanical obstruction (typically blockage at the ventricular end) or because of fracture of the tubing. In either case, intracranial pressure can increase, which, if sudden, can be a medical emergency. Children present with headache, vomiting, lethargy, irritability, esotropia, or paralysis of upward gaze. Seizures may occur. If the obstruction is gradual, more subtle symptoms and signs can occur, such as irritability, poor school performance, and lethargy, which may be mistaken for depression. To assess shunt function, a shunt series (x-rays of the shunt tubing) and neuroimaging studies are done. The ability to compress the bulb that is present on many shunt systems is not a reliable sign of shunt function.

After the shunt is placed, head circumference and development are assessed, and imaging is done periodically.