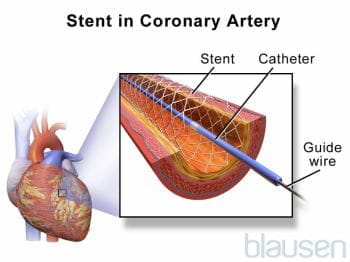 Usually, coronary artery disease is due to

Less often, coronary artery disease is due to

Coronary atherosclerosis is often irregularly distributed in different vessels but typically occurs at points of turbulence (eg, vessel bifurcations). As the atheromatous plaque grows, the arterial lumen progressively narrows, resulting in ischemia (often causing angina pectoris Angina Pectoris Angina pectoris is a clinical syndrome of precordial discomfort or pressure due to transient myocardial ischemia without infarction. It is typically precipitated by exertion or psychologic stress... read more ). The degree of stenosis required to cause ischemia varies with oxygen demand.

Occasionally, an atheromatous plaque ruptures or splits. Reasons are unclear but probably relate to plaque morphology, plaque calcium content, and plaque softening due to an inflammatory process. Rupture exposes collagen and other thrombogenic material, which activate platelets and the coagulation cascade, resulting in an acute thrombus, which interrupts coronary blood flow and causes some degree of myocardial ischemia. The consequences of acute ischemia, collectively referred to as acute coronary syndromes Overview of Acute Coronary Syndromes (ACS) Acute coronary syndromes result from acute obstruction of a coronary artery. Consequences depend on degree and location of obstruction and range from unstable angina to non–ST-segment elevation... read more (ACS), depend on the location and degree of obstruction and range from unstable angina, non-ST elevation myocardial infarction (NSTEMI), to ST elevation myocardial infarction (STEMI), which can result in transmural infarction, and other complications Complications of Acute Coronary Syndromes Numerous complications can occur as a result of an acute coronary syndrome and increase morbidity and mortality. Complications can be roughly categorized as Electrical dysfunction (conduction... read more

Smoking may be a stronger predictor of myocardial infarction in women (especially those < 45). Genetic factors play a role, and several systemic disorders (eg, hypertension, hypothyroidism) and metabolic disorders (eg, hyperhomocysteinemia) contribute to risk. A high level of apo B may identify increased risk when total cholesterol or LDL level is normal.

High blood levels of C-reactive protein indicate plaque instability and inflammation and may be a stronger predictor of risk of ischemic events than high levels of LDL. High blood levels of triglycerides and insulin (reflecting insulin resistance) may be risk factors, but data are less clear. CAD risk is increased by smoking tobacco; by a diet high in fat and calories and low in phytochemicals (found in fruits and vegetables), fiber, and vitamins C, D, and E; a diet relatively low in omega-3 (n-3) polyunsaturated fatty acids (PUFAs—at least in some people); and by poor stress management.

The left coronary artery begins as the left main artery and quickly divides into the left anterior descending (LAD), circumflex, and sometimes an intermediate artery (ramus intermedius). The LAD artery usually follows the anterior interventricular groove and, in some people, continues over the apex. This artery supplies the anterior septum (including the proximal conduction system) and the anterior free wall of the left ventricle (LV). The circumflex artery, which is usually smaller than the LAD artery, supplies the lateral LV free wall.

Most people have right dominance: The right coronary artery passes along the atrioventricular (AV) groove over the right side of the heart; it supplies the sinus node (in 55%), right ventricle, and usually the AV node and inferior myocardial wall. About 10 to 15% of people have left dominance: The circumflex artery is larger and continues along the posterior AV groove to supply the posterior wall and AV node.

PCI is indicated for certain patients with acute coronary syndrome Overview of Acute Coronary Syndromes (ACS) Acute coronary syndromes result from acute obstruction of a coronary artery. Consequences depend on degree and location of obstruction and range from unstable angina to non–ST-segment elevation... read more (ACS) or with stable ischemic heart disease who have angina despite optimal medical therapy.

Patients without significant infarct or complications may quickly return to work and usual activities after stenting, but strenuous activities should be avoided for 6 weeks.

In-stent thrombosis occurs because of the inherent thrombogenicity of metallic stents. Most cases occur within the first 24 to 48 hours. However, late stent thrombosis, occurring after 30 days and as late as ≥ 1 year (rarely), can occur with both bare-metal and drug-eluting stents, especially after cessation of antiplatelet therapy. Progressive endothelialization of the bare-metal stent occurs within the first few months and reduces the risk of thrombosis. However, the antiproliferative drugs released by drug-eluting stents inhibit this process and prolong the risk of thrombosis. Thus, patients who undergo stent placement are treated with various antiplatelet drugs Antiplatelet Drugs Treatment of acute coronary syndromes (ACS) is designed to relieve distress, interrupt thrombosis, reverse ischemia, limit infarct size, reduce cardiac workload, and prevent and treat complications... read more . The current standard regimen for patients with a bare-metal or drug-eluting stent consists of all of the following:

The best results are obtained when the newer antiplatelet drugs are begun before the procedure.

Glycoprotein IIb/IIIa inhibitors are no longer routinely used in stable patients (ie, no comorbidities, no acute coronary syndrome) having elective stent placement. Although controversial, they may be beneficial in some patients with an acute coronary syndrome but should not be considered routine. It is unclear whether it is beneficial to give glycoprotein IIb/IIIa inhibitors before arrival in the cardiac catheterization laboratory, but most national organizations do not recommend their use in this situation (2 Treatment references Coronary artery disease (CAD) involves impairment of blood flow through the coronary arteries, most commonly by atheromas. Clinical presentations include silent ischemia, angina pectoris, acute... read more

A statin is started after stent insertion, if one is not already being used because PCI by itself does not cure or prevent the progression of CAD. Statin therapy has been shown to improve long-term event-free survival (3 Treatment references Coronary artery disease (CAD) involves impairment of blood flow through the coronary arteries, most commonly by atheromas. Clinical presentations include silent ischemia, angina pectoris, acute... read more

). Patients who receive a statin before the procedure have a lower risk of periprocedural MI.

Overall risk of PCI is comparable with that for CABG. Mortality rate is < 1%; Q wave MI rate is < 2%. In < 1%, intimal dissection causes obstruction requiring emergency CABG. Risk of stroke with PCI is clearly less than with CABG (0.34% vs 1.2%).

CABG uses arteries (eg, internal mammary, radial) whenever possible, and if necessary, sections of autologous veins (eg, saphenous) to bypass diseased segments of the coronary arteries. At 1 year, about 85% of venous bypass grafts are patent, and after 5 years, one third or more are completely blocked. However, after 10 years, as many as 97% of internal mammary artery grafts are patent. Arteries also hypertrophy to accommodate increased flow. CABG is superior to PCI in patients with diabetes and in patients with multivessel disease amenable to grafting.

Coronary artery bypass grafting is typically done during cardiopulmonary bypass with the heart stopped; a bypass machine pumps and oxygenates blood. Risks of the procedure include stroke and MI. For patients with a normal-sized heart, no history of MI, good ventricular function, and no additional risk factors, risk is < 5% for perioperative MI, 1 to 2% for stroke, and ≤ 1% for mortality; risk increases with age, poor LV function, and presence of underlying disease. Operative mortality rate is 3 to 5 times higher for a second bypass than for the first.

After cardiopulmonary bypass, about 25 to 30% of patients develop cognitive dysfunction or behavioral changes, possibly caused by microemboli originating in the bypass machine. Cognitive or behavioral changes are more prevalent in older patients, prompting suspicion that these changes are most likely due to diminished "neuronal reserve," making older patients more susceptible to minor injuries incurred during cardiopulmonary bypass. Dysfunction ranges from mild to severe and may persist for weeks to years. To minimize this risk, some centers use a beating heart technique (off-pump CABG, which uses no cardiopulmonary bypass), in which a device mechanically stabilizes the part of the heart upon which the surgeon is working. However, long-term studies have failed to demonstrate lasting benefits of this approach in comparison to conventional on-pump CABG.

CAD may progress despite bypass surgery. Postoperatively, the rate of proximal obstruction of bypassed vessels increases. Vein grafts become obstructed early if thrombi form and later (several years) if atherosclerosis causes slow degeneration of the intima and media. Aspirin prolongs vein graft patency. Continued smoking has a profound adverse effect on patency. After CABG, a statin should be started or continued at maximally tolerated doses.

Antihypertensive recommendations vary. In the US, for patients who are at low risk (< 10%) of atherosclerotic cardiovascular disease (ASCVD), antihypertensives are recommended if blood pressure is > 140/90. In patients with coronary artery disease or whose risk of ASCVD is > 10%, antihypertensive treatment is recommended for blood pressure > 130/80 mm Hg (1 Prevention references Coronary artery disease (CAD) involves impairment of blood flow through the coronary arteries, most commonly by atheromas. Clinical presentations include silent ischemia, angina pectoris, acute... read more

Modification of serum lipid levels (particularly with statins) may slow or even partially reverse the progression of CAD. Treatment goals have been modified. Instead of trying to achieve specific target low density lipoprotein cholesterol (LDL) levels, patients are selected for treatment based on their risk of ASCVD. Lower risk patients with elevated LDL may not require statin treatment. Four higher risk patient groups have been identified in whom the benefit of statin therapy outweighs the risk of adverse events:

Nicotinic acid or a fibrate may be added for patients with an high-density lipoprotein (HDL) cholesterol level < 40 mg/dL (< 1.03 mmol/L), although several recent trials have failed to demonstrate a lower risk of ischemia or slowed progression of atherosclerosis when drugs are used to raise HDL (2 Prevention references Coronary artery disease (CAD) involves impairment of blood flow through the coronary arteries, most commonly by atheromas. Clinical presentations include silent ischemia, angina pectoris, acute... read more

Overview of Cardiomyopathies
Test your knowledge