A number of procedures are used to gain vascular access. 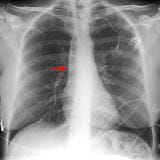 in both adults and children.

Common complications (eg, local infection, venous thrombosis, thrombophlebitis, interstitial fluid extravasation) can be reduced by using a meticulous sterile technique during insertion and by replacing or removing the catheters within 72 hours.

CVCs can be inserted through the jugular, subclavian, or femoral veins or via the upper arm peripheral veins (PICC line). Although the type of catheter and site chosen are often determined by individual clinical and patient characteristics, a jugular CVC or PICC line is usually preferred to a subclavian CVC (associated with a higher risk of bleeding and pneumothorax) or femoral CVC (associated with a higher risk of infection). During cardiac arrest, fluid and drugs given through a femoral vein CVC often fail to circulate above the diaphragm because of the increased intrathoracic pressure generated by cardiopulmonary resuscitation (CPR). In this case, a subclavian or internal jugular approach may be preferred.

Ultrasound guidance for placement of internal jugular lines and PICC lines is now standard care and reduces the risk of complications. Coagulopathy should be corrected whenever feasible prior to CVC insertion, and the subclavian approach should not be used in patients with uncorrected coagulopathy because the venipuncture site cannot be monitored or compressed.

For a step-by-step description of how to do central venous catheterization, see the following:

Videos of Ultrasound-Guided and Percutaneous Cannulation

occurs in 1% of patients after CVC insertion. Atrial or ventricular arrhythmias frequently occur during catheter insertion but are generally self-limited and subside when the guide wire or catheter is withdrawn from within the heart. The incidence of catheter bacterial colonization without systemic infection may be as high as 35%, whereas that of true sepsis is 2 to 8%. Catheter-related venous thrombosis is an increasingly recognized complication, particularly in the upper extremities. Rarely, accidental arterial catheterization requires surgical repair of the artery. Hydrothorax and hydromediastinum may occur when catheters are positioned extravascularly. Catheter damage to the tricuspid valve, bacterial endocarditis Infective Endocarditis Infective endocarditis is infection of the endocardium, usually with bacteria (commonly, streptococci or staphylococci) or fungi. It may cause fever, heart murmurs, petechiae, anemia, embolic... read more

To reduce the risk of venous thrombosis and catheter sepsis, clinicians should remove CVCs as soon as possible. The skin entry site must be cleansed and inspected daily for local infection; the catheter must be replaced if local or systemic infection occurs. Some clinicians feel it is beneficial to change CVC catheters at regular intervals (eg, every 5 to 7 days) in patients with sepsis who remain febrile; this approach may reduce the risk of bacterial colonization of the catheter.

Midline catheters (MC) are 8 to 20 cm in length, have a single or double lumen, and are placed peripherally in the nondominant arm 1.5 cm above or below the antecubital fossa, into the basilic, cephalic, or brachial vein. Although placement of a MC requires use of the modified Seldinger technique and ultrasonographic guidance, MCs are not considered central venous catheters because the tip is located at or below the axillary vein. Thus, x-ray confirmation of correct placement of the MC tip is not necessary.

The use of automated noninvasive blood pressure devices has diminished the use of arterial catheters simply for pressure monitoring. However, these catheters are beneficial in unstable patients who require minute-to-minute pressure measurement and in those requiring frequent arterial blood gas sampling. Indications include refractory shock and respiratory failure. Blood pressure is frequently somewhat higher when measured by an arterial catheter than by sphygmomanometry. Initial upstroke, maximum systolic pressure, and pulse pressure increase the more distal the point of measurement, whereas the diastolic and mean arterial pressures decline. Vessel calcification, atherosclerosis, proximal occlusion, and extremity position can all affect the value of arterial catheter measurements.

At all sites, complications include bleeding, infection, thrombosis, intimal dissection, and distal embolism. Catheters should be removed if signs of local or systemic infection are present.

Radial arterial complications include ischemia of the hand and forearm due to thrombosis or embolism, intimal dissection, or spasm at the site of catheterization. The risk of arterial thrombosis is higher in small arteries (explaining the greater incidence in women) and with increased duration of catheterization. Occluded arteries nearly always recanalize after catheter removal.

Femoral arterial complications include atheroembolism during guide wire insertion. The incidence of thrombosis and distal ischemia is much lower than that for radial arterial catheterization.

Any fluid or substance routinely given IV (including blood products) may be given via a sturdy needle inserted in the medullary cavity of select long bones. Fluids reach the central circulation as quickly as with venous infusion. This technique is used more commonly in infants and young children, whose bony cortices are thin and easily penetrated and in whom peripheral and central venous access can be quite difficult, particularly in shock or cardiac arrest. However, this technique can be used in older patients at various sites (eg, sternum, proximal tibia, humerus) via special devices (eg, pressure-loaded puncture device, drilling device) that are now more readily available. Thus, intraosseous infusion is becoming more common in adults.