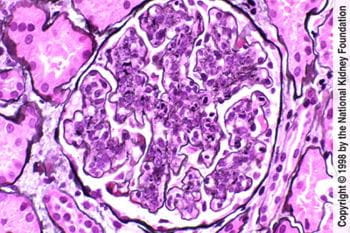 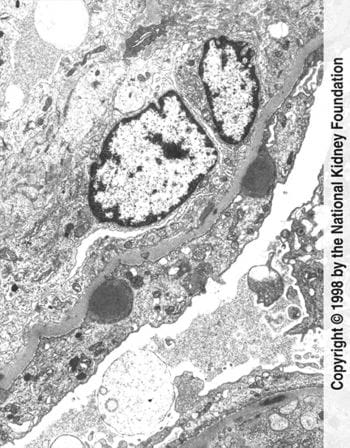 Postinfectious Glomerulonephritis (Immune Complex Deposits)
Postinfectious glomerulonephritis occurs after infection, usually with a nephritogenic strain of group A beta-hemolytic streptococcus. Diagnosis is suggested by history and urinalysis and confirmed by finding a low complement level and sometimes by antibody testing. Prognosis is excellent. Treatment is supportive.

Postinfectious glomerulonephritis (PIGN), a nephritic syndrome Overview of Nephritic Syndrome Nephritic syndrome is defined by hematuria, variable degrees of proteinuria, usually dysmorphic red blood cells (RBCs), and often RBC casts on microscopic examination of urinary sediment. Often... read more , is the most common cause of a glomerular disorder in children between 5 and 15 years; it is rare in children < 2 years and uncommon in adults > 40 years.

) and type 49 (which causes impetigo Impetigo and Ecthyma Impetigo is a superficial skin infection with crusting or bullae caused by streptococci, staphylococci, or both. Ecthyma is an ulcerative form of impetigo. Diagnosis is clinical. Treatment is... read more

); an estimated 5 to 10% of patients with streptococcal pharyngitis and about 25% of those with impetigo develop PIGN. A latency period of 6 to 21 days between infection and glomerulonephritis onset is typical, but latency may extend up to 6 weeks.

infections are additional important conditions in which PIGN develops; ventriculoperitoneal shunts are more resistant to infection.

Uncommonly, nephrotic syndrome may persist after resolution of severe disease.

or impetigo Impetigo and Ecthyma Impetigo is a superficial skin infection with crusting or bullae caused by streptococci, staphylococci, or both. Ecthyma is an ulcerative form of impetigo. Diagnosis is clinical. Treatment is... read more

plus either typical symptoms of PIGN or incidental findings on urinalysis. Demonstration of hypocomplementemia is essentially confirmatory.

Tests done to confirm the diagnosis depend on clinical findings. Antistreptolysin O, antihyaluronidase, and antideoxyribonuclease (anti-DNAase) antibodies are commonly measured. Serum creatinine and complement levels (C3 and total hemolytic complement activity) are also usually measured; however, in patients with typical clinical findings, some tests can be omitted. Sometimes other tests are done. Biopsy confirms the diagnosis but is rarely necessary.

Antistreptolysin O level, the most common laboratory evidence of recent streptococcal infection, increases and remains elevated for several months in about 75% of patients with pharyngitis and in about 50% of patients with impetigo, but it is not specific. The streptozyme test, which additionally measures antihyaluronidase, antideoxyribonuclease, and other titers detects 95% of recent streptococcal pharyngitis and 80% of skin infections.

Serum creatinine may rise rapidly but usually peaks below a level requiring dialysis Hemodialysis In hemodialysis, a patient’s blood is pumped into a dialyzer containing 2 fluid compartments configured as bundles of hollow fiber capillary tubes or as parallel, sandwiched sheets of semipermeable... read more .

C3 and total hemolytic complement activity (CH50) levels fall during active disease and return to normal within 6 to 8 weeks in 80% of PIGN cases; C1q, C2, and C4 levels are only minimally decreased or remain normal. Cryoglobulinemia may appear and persist for several months, whereas circulating immune complexes are detectable for only a few weeks.

Biopsy specimens show enlarged and hypercellular glomeruli, initially with neutrophilic infiltration and later with mononuclear infiltration. Epithelial cell hyperplasia is a common early, transient feature. Microthrombosis may occur; if damage is severe, hemodynamic changes due to cellular proliferation and edema of the glomerulus cause oliguria, occasionally accompanied by epithelial crescents (formed within Bowman space from epithelial cell hyperplasia). Endothelial and mesangial cells multiply, and the mesangial regions often are greatly expanded by edema and contain neutrophils, dead cells, cellular debris, and subepithelial deposits of electron-dense material.

Immunofluorescence microscopy usually shows immune complex deposition with IgG and complement in a granular pattern. On electron microscopy, these deposits are semilunar or hump-shaped and are located in the subepithelial area. The presence of these deposits and of small subendothelial and mesangial deposits initiates a complement-mediated inflammatory reaction that leads to glomerular damage. The major antigen is probably Zymogen cysteine proteinase exotoxin B (Zymogen/SPE B).

Normal renal function is retained or regained by 85 to 95% of patients. Glomerular filtration rate (GFR) usually returns to normal over 1 to 3 months, but proteinuria may persist for 6 to 12 months and microscopic hematuria for several years. Transient changes in urinary sediment may recur with minor upper respiratory infections. Renal cellular proliferation disappears within weeks, but residual sclerosis is common. In 10% of adults and 1% of children, postinfectious glomerulonephritis evolves into rapidly progressive glomerulonephritis Rapidly Progressive Glomerulonephritis (RPGN) Rapidly progressive glomerulonephritis is acute nephritic syndrome accompanied by microscopic glomerular crescent formation with progression to renal failure within weeks to months. Diagnosis... read more

Treatment is supportive and may include restriction of dietary protein, sodium, and fluid and, in more severe cases, treatment of edema Treatment Edema is swelling of soft tissues due to increased interstitial fluid. The fluid is predominantly water, but protein and cell-rich fluid can accumulate if there is infection or lymphatic obstruction... read more

. Dialysis Hemodialysis In hemodialysis, a patient’s blood is pumped into a dialyzer containing 2 fluid compartments configured as bundles of hollow fiber capillary tubes or as parallel, sandwiched sheets of semipermeable... read more is occasionally necessary. Antimicrobial therapy is preventive only when given within 36 hours of infection and before glomerulonephritis becomes established.

Overview of Leukopenias
Test your knowledge