The most common cause of radiculopathies is

(RA) or osteoarthritis Osteoarthritis (OA) Osteoarthritis is a chronic arthropathy characterized by disruption and potential loss of joint cartilage along with other joint changes, including bone hypertrophy (osteophyte formation). Symptoms... read more

, especially in the cervical and lumbar areas, may also compress isolated nerve roots.

) may manifest with radicular symptoms instead of the usual symptoms of spinal cord dysfunction Symptoms and Signs Spinal cord disorders can cause permanent severe neurologic disability. For some patients, such disability can be avoided or minimized if evaluation and treatment are rapid. The spinal cord... read more .

Diabetes Diabetes Mellitus (DM) Diabetes mellitus is impaired insulin secretion and variable degrees of peripheral insulin resistance leading to hyperglycemia. Early symptoms are related to hyperglycemia and include polydipsia... read more can cause a painful thoracic or extremity radiculopathy by causing ischemia of the nerve root.

), or spirochetes (eg, Lyme disease Lyme Disease Lyme disease is a tick-transmitted infection caused by the spirochete Borrelia species. Early symptoms include an erythema migrans rash, which may be followed weeks to months later by... read more

usually causes a painful radiculopathy with dermatomal sensory loss and characteristic rash, but it may cause a motor radiculopathy with segmental weakness and reflex loss. Cytomegalovirus-induced polyradiculitis is a complication of AIDS.

). Muscles innervated by the affected motor root become weak and atrophy; they also may be flaccid with fasciculations. Sensory root involvement causes sensory impairment in a dermatomal distribution. Corresponding segmental deep tendon reflexes may be diminished or absent. Electric shock–like pains may radiate along the affected nerve root’s distribution.

Pain may be exacerbated by movements that transmit pressure to the nerve root through the subarachnoid space (eg, moving the spine, coughing, sneezing, doing the Valsalva maneuver).

Lesions of the cauda equina, which affect multiple lumbar and sacral roots ( cauda equina syndrome Cauda Equina Syndrome Cauda equina syndrome occurs when the nerve roots at the caudal end of the cord are compressed or damaged, disrupting motor and sensory pathways to the lower extremities and bladder. (See also... read more ), cause radicular symptoms in both legs and may impair sphincter and sexual function. 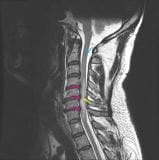 Radicular symptoms require MRI or CT of the affected area. Myelography is needed only if MRI is contraindicated (eg, because of an implanted pacemaker or presence of other metal) and CT is inconclusive. The area imaged depends on symptoms and signs; if the level is unclear, electrodiagnostic tests should be done to localize the affected root, but they cannot identify the cause.

If imaging does not detect an anatomic abnormality, cerebrospinal fluid analysis is done to check for infectious or inflammatory causes, and fasting plasma glucose is measured to check for diabetes Diagnosis Diabetes mellitus is impaired insulin secretion and variable degrees of peripheral insulin resistance leading to hyperglycemia. Early symptoms are related to hyperglycemia and include polydipsia... read more .

Acute pain requires appropriate analgesics (eg, acetaminophen, nonsteroidal anti-inflammatory drugs [NSAIDs], sometimes opioids). NSAIDs are particularly useful for disorders that involve inflammation. Muscle relaxants, sedatives, and topical treatments rarely provide additional benefit. If symptoms are not relieved with nonopioid analgesics, corticosteroids can be given systemically or as an epidural injection; however, analgesia tends to be modest and temporary. Methylprednisolone may be given, tapered over 6 days, starting with 24 mg orally once a day and decreased by 4 mg a day.

Management of chronic pain Treatment Chronic pain is pain that persists or recurs for > 3 months, persists > 1 month after resolution of an acute tissue injury, or accompanies a nonhealing lesion. Causes include chronic disorders... read more can be difficult; acetaminophen and NSAIDs are often only partly effective, and long-term use of NSAIDs has substantial risks. Opioids have a risk of addiction. Tricyclic antidepressants and antiseizure drugs may be effective, as may physical therapy and consultation with a mental health practitioner. For a few patients, alternative medical treatments (eg, transdermal electrical nerve stimulation Electrical stimulation Treatment of pain and inflammation aims to facilitate movement and improve coordination of muscles and joints. Nondrug treatments include therapeutic exercise, heat, cold, electrical stimulation... read more , spinal manipulation Chiropractic In chiropractic (a manipulative and body-based practice), the relationship between the structure of the spine and other articulating surfaces and their interaction with the nervous system is... read more , acupuncture Acupuncture Acupuncture, a therapy within traditional Chinese medicine, is one of the most widely accepted components of integrative therapies in the western world. Specific points on the body are stimulated... read more , medicinal herbs Overview of Dietary Supplements Dietary supplements are the most commonly used of all integrative, complementary, and alternative therapies, primarily because they are widely available, relatively inexpensive, and can be bought... read more ) may be tried if all other treatments are ineffective.

If the pain is intractable or if progressive weakness or sphincteric dysfunction suggest spinal compression, surgical decompression may be necessary.