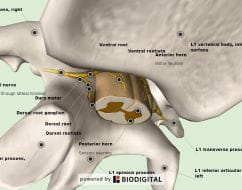 A motor unit consists of

The anterior horn cells are located in the gray matter of the spinal cord and thus are technically part of the CNS. In contrast to the motor system, the cell bodies of the afferent sensory fibers lie outside the spinal cord, in dorsal root ganglia.

Branches of the cervical and lumbosacral spinal nerves anastomose peripherally into plexuses, then branch into nerve trunks that terminate up to 1 m away in peripheral structures (see figure Plexuses). The intercostal nerves are segmental.

The term peripheral nerve refers to the part of a spinal nerve distal to the root and plexus. Peripheral nerves are bundles of nerve fibers. They range in diameter from 0.3 to 22 mcm. Schwann cells form a thin cytoplasmic tube around each fiber and further wrap larger fibers in a multilayered insulating membrane (myelin sheath).

Peripheral nerve disorders can result from damage to or dysfunction of the one of the following:

Disorders can be genetic or acquired (due to toxic, metabolic, traumatic, infectious, or inflammatory conditions—see table Some Causes of Peripheral Nervous System Disorders).

More than one site can be affected; eg, in the most common variant of Guillain-Barré syndrome, multiple segments of cranial nerves, usually the 2 facial nerves, may be affected.

Because sensory and motor cell bodies are in different locations, a nerve cell body disorder typically affects either the sensory or motor component but rarely both.

Because the vasa nervorum do not reach the center of a nerve, centrally located fascicles are most vulnerable to vascular disorders (eg, vasculitis, ischemia). These disorders result in small-fiber sensory dysfunction (sharp pain and burning sensations), motor weakness proportional to atrophy, and less severe reflex abnormalities than in other nerve disorders. The distal two thirds of a limb is affected most. Initially, deficits tend to be asymmetric because the vasculitic or ischemic process is random. However, multiple infarcts may later coalesce, causing symmetric deficits (polyneuropathy).

Damage to the axon transport system for cellular constituents, especially microtubules and microfilaments, causes significant axon dysfunction. First affected are the smaller fibers (because they have greater metabolic requirements) at the most distal part of the nerve. Then, axonal degeneration slowly ascends, producing the characteristic distal-to-proximal pattern of symptoms (stocking-glove sensory loss, followed by weakness).

Damage to the myelin sheath (eg, by injury or Guillain-Barré syndrome) can often be repaired by surviving Schwann cells in about 6 to 12 weeks.

After axonal damage, the fiber regrows within the Schwann cell tube at about 1 mm/day once the pathologic process ends. However, regrowth may be misdirected, causing aberrant innervation (eg, of fibers in the wrong muscle, of a touch receptor at the wrong site, or of a temperature instead of a touch receptor).

Regeneration is impossible when the cell body dies and is unlikely when the axon is completely lost.

History should focus on type of symptom, onset, progression, and location, as well as information about potential causes (eg, family history, toxic exposures, past medical disorders).

Physical and neurologic examination should further define the type of deficit (eg, motor deficit, type of sensory deficit, combination). The following are evaluated:

Physicians should suspect a peripheral nervous system disorder based on the pattern and type of neurologic deficits, especially if deficits are localized to particular nerve roots, spinal nerves, plexuses, specific peripheral nerves, or a combination. These disorders are also suspected in patients with mixed sensory and motor deficits, with multiple foci, or with a focus that is incompatible with a single anatomic site in the CNS.

Clues that a peripheral nervous system disorder may be the cause of generalized weakness include the following:

These deficits suggest an upper motor neuron disorder as the cause of weakness. Hyporeflexia is consistent with peripheral nervous system deficits but is nonspecific. For example, acute cervical transverse myelitis can mimic Guillain-Barré syndrome, particularly in patients with preexisting neuropathy.

Patients with weakness but no sensory deficits can be evaluated with electrodiagnostic testing.

Other testing, such as imaging, depends on whether a CNS lesion must be ruled out (eg, MRI if all limbs are affected, to rule out cervical spinal cord compression).

Nerve biopsy is occasionally done to help differentiate demyelinating from vasculitic large-fiber neuropathies. If vasculitis is a consideration, the biopsy specimen should include skin and muscle to increase the likelihood of a definitive diagnosis. If a small-fiber neuropathy is suspected, skin punch biopsy can be done; loss of nerve endings supports that diagnosis.

Genetic testing is indicated if a hereditary neuropathy is suspected.

Treatment of a peripheral nerve disorder is directed at the underlying disorder when possible. Otherwise, treatment is supportive. A multidisciplinary team approach helps patients cope with progressive neurologic disability:

Early in fatal disorders, health care practitioners must talk frankly with patients, family members, and caregivers to determine the level of intervention acceptable. Patients are encouraged to put their decisions in writing (advance directives) before they become incapacitated. These decisions should be reviewed and confirmed at various stages of the disorder.

Overview of the Autonomic Nervous System