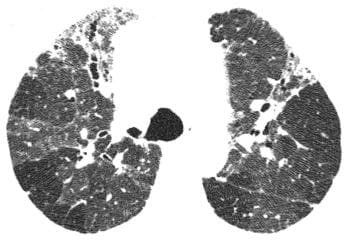 Examples of Hypersensitivity Pneumonitis
Hypersensitivity pneumonitis is a syndrome of cough, dyspnea, and fatigue caused by sensitization and subsequent hypersensitivity to environmental (frequently occupational or domestic) antigens. Acute, subacute, and chronic forms exist; all are characterized by acute interstitial inflammation and development of granulomas and fibrosis with long-term exposure. Diagnosis is based on a combination of history, physical examination, imaging tests, bronchoalveolar lavage, and biopsy. Short-term treatment is with corticosteroids; long-term treatment is antigen avoidance and, if fibrosis is present, often immunosuppression.

Over 300 antigens have been identified as triggers for hypersensitivity pneumonitis, although antigens encountered through farming, birds, and water contamination account for about 75% of cases.

); farmer’s lung, caused by inhalation of hay dust containing thermophilic actinomycetes, is the prototype. Substantial overlap exists between hypersensitivity pneumonitis and chronic bronchitis in farmers, in whom chronic bronchitis is far more common, occurs independently of smoking status, is linked to thermophilic actinomycete exposure, and leads to findings similar to those of hypersensitivity pneumonitis on diagnostic testing.

The disorder seems to represent a type IV hypersensitivity reaction Overview of Allergic and Atopic Disorders Allergic (including atopic) and other hypersensitivity disorders are inappropriate or exaggerated immune reactions to foreign antigens. Inappropriate immune reactions include those that are... read more , in which repeated exposure to antigen in genetically susceptible people leads to acute neutrophilic and mononuclear alveolitis, followed by interstitial lymphocytic infiltration and granulomatous reaction. Fibrosis with bronchiolar obliteration occurs with continued exposure.

Circulating precipitins (antibodies sensitized to antigen) seem not to have a primary etiologic role, and clinical history of allergy (such as asthma and seasonal allergies) is not a predisposing factor. Cigarette smoking seems to delay or prevent development, perhaps through down-regulation of the lung’s immune response to inhaled antigens. However, smoking may exacerbate the disease once established.

Hypersensitivity pneumonitis has clinical similarities to other disorders that have different pathophysiologies.

Symptoms and Signs of Hypersensitivity Pneumonitis

Symptoms and signs tend to depend on whether onset is

Only a small proportion of exposed people develop symptoms and in most cases only after weeks to months of exposure and sensitization.

Subacute disease falls between the acute and chronic forms and manifests either as cough, dyspnea, fatigue, and anorexia that develops over days to weeks or as acute symptoms superimposed on chronic ones.

). HRCT and pulmonary function tests Overview of Tests of Pulmonary Function Pulmonary function tests provide measures of airflow, lung volumes, gas exchange, response to bronchodilators, and respiratory muscle function. Basic pulmonary function tests available in the... read more are done routinely. Bronchoalveolar lavage and lung biopsy may be necessary if results are inconclusive. The differential diagnosis is broad and includes environmental pulmonary diseases Overview of Environmental Pulmonary Disease Environmental pulmonary diseases result from inhalation of dusts, allergens, chemicals, gases, or environmental pollutants. The lungs are continually exposed to the external environment and... read more , sarcoidosis Sarcoidosis Sarcoidosis is an inflammatory disorder resulting in noncaseating granulomas in one or more organs and tissues; etiology is unknown. The lungs and lymphatic system are most often affected, but... read more

Clues in the history include

Examination often is not useful in making the diagnosis, although abnormal lung sounds and clubbing may be present.

Imaging tests are typically done for patients with appropriate history, symptoms, and signs.

Chest x-ray is neither sensitive nor specific for detecting disease and is frequently normal in patients with acute and subacute forms. It may show reticular or nodular opacities, usually when symptoms are present. Chest x-rays of patients with chronic disease are more likely to show reticular or nodular opacities in the upper lobes with reduced lung volumes and honeycombing, similar to that of idiopathic pulmonary fibrosis.

High-resolution CT is far more likely to show abnormalities and is considered standard for evaluating parenchymal changes in hypersensitivity pneumonitis. The most typical HRCT finding in acute and subacute disease is the presence of profuse, poorly defined centrilobular micronodules. Occasionally, ground-glass opacification (attenuation) is the predominant or only finding. It is usually diffuse but sometimes spares the periphery of the secondary lobule. Focal areas of hyperlucency, similar to those present in bronchiolitis obliterans, may be a prominent feature in some patients (eg, mosaic attenuation with air trapping on expiratory HRCT).

Pulmonary function tests Overview of Tests of Pulmonary Function Pulmonary function tests provide measures of airflow, lung volumes, gas exchange, response to bronchodilators, and respiratory muscle function. Basic pulmonary function tests available in the... read more should be done as part of the standard evaluation of suspected cases of hypersensitivity pneumonitis. The syndrome can cause obstructive, restrictive, or a mixed pattern of airway changes. Advanced disease most commonly causes a restrictive defect (decreased lung volumes), a decreased diffusing capacity for carbon monoxide (DLCO), and hypoxemia. Airway obstruction is unusual in acute disease but may develop in chronic disease.

Results of bronchoalveolar lavage are rarely specific for the hypersensitivity pneumonitis but are often a component of the diagnostic assessment for chronic respiratory symptoms and pulmonary function abnormalities. A lymphocytosis in lavage fluid (> 60%) with CD4+/CD8+ ratio < 1.0 (the normal ratio ± standard error of the mean = 2.3 ± 0.2) is characteristic of the disorder; by contrast, lymphocytosis with CD4+ predominance (ratio > 1.0) is more characteristic of sarcoidosis Sarcoidosis Sarcoidosis is an inflammatory disorder resulting in noncaseating granulomas in one or more organs and tissues; etiology is unknown. The lungs and lymphatic system are most often affected, but... read more

. Other findings may include mast cells > 1% (after acute exposure) and increased neutrophils and eosinophils.

Lymphocyte transformation testing is an in vitro test of sensitization and is particularly useful in detecting sensitization to metals. The test can be done on peripheral blood but is better done on bronchial lavage fluid. In this test, the patient's lymphocytes are exposed to potential antigens. If the lymphocytes transform into blasts and proliferate, they (and hence the patient) were previously sensitized to that antigen.

Additional testing is indicated when additional support for the diagnosis is required or to detect other causes of interstitial lung disease. Circulating precipitins (specific precipitating antibodies to the suspected antigen) are suggestive of an exposure that may be the cause of the illness. However, the presence of circulating precipitins is neither sensitive nor specific. Identification of a specific precipitating antigen may require that industrial hygiene specialists do detailed aerobiologic and/or microbiologic assessment of the workplace, but workplace assessments usually are guided by known sources of inciting antigens (eg, Bacillus subtilis in detergent factories).

Skin tests are not helpful, and eosinophilia is absent.

Tests helpful in detecting other disorders include serologic tests and cultures (for psittacosis and other pneumonias) and autoantibodies (for connective tissue disease). Elevated eosinophil levels may suggest chronic eosinophilic pneumonias Chronic Eosinophilic Pneumonia Chronic eosinophilic pneumonia (CEP) is a disorder of unknown etiology characterized by an abnormal, chronic accumulation of eosinophils in the lung. (See also Overview of Eosinophilic Pulmonary... read more . Hilar and paratracheal lymph node enlargement is more characteristic of sarcoidosis Sarcoidosis Sarcoidosis is an inflammatory disorder resulting in noncaseating granulomas in one or more organs and tissues; etiology is unknown. The lungs and lymphatic system are most often affected, but... read more

Pathologic changes of acute hypersensitivity pneumonitis are completely reversible if detected early and if antigen exposure is eliminated. Acute disease is self-limiting with antigen avoidance; symptoms usually lessen within hours. Chronic disease has a more complicated prognosis: fibrosis is usually irreversible but may not progress if the patient is no longer exposed to the antigen.

Treatment of acute or subacute hypersensitivity pneumonitis is with corticosteroids, usually prednisone 60 mg orally once a day for 1 to 2 weeks, then tapered over the next 2 to 4 weeks to 20 mg once a day, followed by weekly decrements of 2.5 mg until the drug is stopped. This regimen relieves initial symptoms but does not appear to alter long-term outcome.

Treatment of chronic hypersensitivity pneumonitis is usually with longer courses of prednisone 30 to 40 mg orally once a day with tapering dependent on clinical response. Some patients require corticosteroid-sparing agents (eg, mycophenolate, azathioprine) for long-term treatment.

The most important aspect of long-term management of hypersensitivity pneumonitis is avoidance of exposure to antigens. A complete change of environment is rarely realistic, especially for farmers and other workers, in which case dust control measures (such as wetting down compost before disturbing it) or using air filters or protective masks may be effective. Fungicides may be used to prevent the growth of antigenic microorganisms (eg, in hay or on sugar cane), but the long-term safety of this approach is unknown. Extensive cleaning of wet ventilation systems, removal of moist carpets, and maintenance of low humidity are also effective in some settings. Patients must be told, however, that these measures may be inadequate if exposure continues.

Overview of Allergic and Atopic Disorders