Full review/revision Apr 2022 | Modified Sep 2022
VIEW PROFESSIONAL VERSION
Polyneuropathy is the simultaneous malfunction of many peripheral nerves throughout the body.

Acute polyneuropathy has many causes:

The cause of chronic polyneuropathy is often unknown. Known causes include the following:

The most common form of chronic polyneuropathy usually results from poor control of blood sugar levels in people with diabetes but may result from excessive use of alcohol. 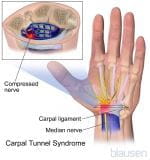 Depending on the cause, polyneuropathies may affect the following:

Polyneuropathy may result from damage to any of the following:

Symptoms of polyneuropathy may appear suddenly (acute, occurring over a few days to a couple of weeks) or develop slowly and occur over a period of time (chronic, occurring over months to years) depending on the cause.

Acute polyneuropathies (as occurs in Guillain-Barré syndrome Guillain-Barré Syndrome (GBS) Guillain-Barré syndrome is a form of polyneuropathy causing muscle weakness, which usually worsens over a few days to weeks, then slowly improves or returns to normal on its own. With treatment... read more or with toxins) often begin suddenly in both legs and progresses rapidly upward to the arms. Symptoms include weakness and a pins-and-needles sensation or loss of sensation. The muscles that control breathing may be affected, resulting in respiratory failure.

Many chronic polyneuropathies affect sensation primarily. Usually, the feet are affected first, but sometimes the hands are. A pins-and-needles sensation, numbness, burning pain, and loss of vibration sense and position sense (knowing where the arms and legs are) are prominent symptoms. Because position sense is lost, walking and even standing become unsteady. Consequently, muscles may not be used. Eventually, they may weaken and waste away. Then, muscles may become stiff and permanently shortened (called contractures).

Diabetic neuropathy commonly causes painful tingling or burning sensations in the hands and feet—a condition called distal polyneuropathy. Pain is often worse at night and may be aggravated by touch or by a change in temperature. People may lose the senses of temperature and pain, so they often burn themselves and may have open sores caused by prolonged pressure or other injuries. Without pain as a warning of too much stress, joints are susceptible to injuries. This type of joint injury is called neurogenic arthropathy (Charcot joints Neurogenic Arthropathy Neurogenic arthropathy is caused by progressive joint destruction, often very rapid, that develops because people cannot sense pain, continually injure joints, and thus are not aware of the... read more ).

, which controls involuntary functions in the body (such as blood pressure, heart rate, digestion, salivation, and urination). Typical symptoms are constipation, sexual dysfunction, and fluctuating blood pressure—most notably a sudden fall in blood pressure when a person stands up (orthostatic hypotension Dizziness or Light-Headedness When Standing Up In some people, particularly older people, blood pressure drops excessively when they sit or stand up (a condition called orthostatic or postural hypotension). Symptoms of faintness, light-headedness... read more ). The skin may become pale and dry, and sweating may be reduced. Much less often, control of bowel movements or urination is lost, leading to fecal or urinary incontinence.

). Abnormalities in sensation and muscle weakness may be mild. Affected people with mild symptoms may not notice the symptoms or may consider them unimportant. Other people are severely affected.

How completely people recover depends on the cause of polyneuropathy.

are usually done, particularly in the legs and feet. These tests may be used to do the following:

After polyneuropathy is diagnosed, its cause, which may be treatable, must be identified. Doctors ask whether other symptoms are present and how quickly the symptoms developed. This information may suggest possible causes.

Blood and urine tests may detect a disorder that is causing polyneuropathy, such as diabetes, kidney failure, or an underactive thyroid gland.

Sometimes a nerve or muscle biopsy is necessary.

Sometimes polyneuropathy affecting the hands and feet is the first indication that people have diabetes.

Sometimes, when extensive testing detects no obvious cause, the cause is a hereditary neuropathy that affects other family members so mildly that the disorder was never suspected.

If weakness is widespread and rapidly worsening, doctors do other tests:

Specific treatment of polyneuropathy depends on the cause, as for the following:

If the cause cannot be corrected, treatment focuses on relieving pain and problems related to muscle weakness. Physical therapy sometimes reduces muscle stiffness and can prevent muscles from shortening and becoming stiff. Physical and occupational therapists can recommend useful assistive devices.

Some drugs that are usually not considered pain relievers can lessen pain due to nerve damage Neuropathic Pain Neuropathic pain is caused by damage to or dysfunction of the nerves, spinal cord, or brain. (See also Overview of Pain.) Neuropathic pain may result from Compression of a nerve—for example... read more . They include the antidepressant amitriptyline, the antiseizure drugs gabapentin and pregabalin, and mexiletine (used to treat abnormal heart rhythms). Lidocaine, an anesthetic applied as a lotion, an ointment, or a skin patch, may also help.