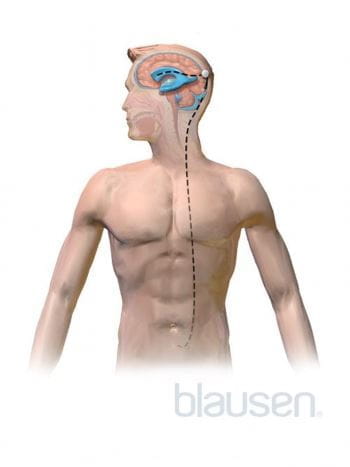 Cerebral Angiography: Catheter Insertion
A subarachnoid hemorrhage is bleeding into the space (subarachnoid space) between the inner layer (pia mater) and middle layer (arachnoid mater) of the tissues covering the brain (meninges).

A subarachnoid hemorrhage is a life-threatening disorder that can rapidly result in serious, permanent disabilities. It is the only type of stroke more common among women than among men.

Subarachnoid hemorrhage is considered a stroke only when it occurs spontaneously—that is, when the hemorrhage does not result from external forces, such as an accident or a fall. A spontaneous hemorrhage usually results from the following:

Hemorrhage due to a ruptured aneurysm can occur at any age but is most common among people aged 40 to 65.

Rarely, a blood clot forms on an infected heart valve, travels (becoming an embolus) to an artery that supplies the brain, and causes the artery to become inflamed. The wall of the artery may then weaken and rupture.

Before rupturing, an aneurysm usually causes no symptoms. However, it can cause symptoms if it does one of the following:

The following can be early warning signs before a large rupture:

These warning signs for subarachnoid hemorrhage can occur minutes to weeks before the rupture. People should report any unusual headaches to a doctor immediately.

When a large aneurysm ruptures, it causes the following symptoms:

The sudden, severe headache caused by a rupture peaks within seconds. It is often described as the worst headache ever experienced. The headache is often followed by a brief loss of consciousness. Some people die before reaching a hospital. Some people remain unconscious in a coma and ultimately die. Others wake up, feeling confused and sleepy. They may also feel restless. Within hours or even minutes, people may again become sleepy and confused. They may become unresponsive and difficult to arouse.

Within 24 hours, blood and cerebrospinal fluid around the brain irritate the layers of tissue covering the brain (meninges), causing a stiff neck as well as continuing headaches, often with vomiting, dizziness, and low back pain.

Frequent fluctuations in the heart rate and in the breathing rate often occur, sometimes accompanied by seizures.

Severe impairments may develop and become permanent within minutes or hours. Fever, continued headaches, and confusion are common during the first 5 to 10 days.

A subarachnoid hemorrhage can lead to other serious problems (complications) such as the following:

If people have a sudden, severe headache that peaks within seconds or that is accompanied by loss of consciousness, confusion, or any symptoms suggesting a stroke, they should go immediately to the hospital. Testing for a subarachnoid hemorrhage is done as soon as possible. Then, treatment can be started as soon as possible.

Computed tomography (CT) is done as soon as possible to check for bleeding. Magnetic resonance imaging (MRI) can also detect bleeding but may not be available immediately.

A spinal tap Spinal Tap Diagnostic procedures may be needed to confirm a diagnosis suggested by the medical history and neurologic examination. Electroencephalography (EEG) is a simple, painless procedure in which... read more

(lumbar puncture) is done if CT is inconclusive or if CT is normal but doctors still suspect a subarachnoid hemorrhage. It can detect any blood in the fluid that surrounds the brain and spinal cord (cerebrospinal fluid). A spinal tap is not done if doctors suspect that pressure within the skull is increased enough to make doing a spinal tap risky.

About 35% of people who have a subarachnoid hemorrhage due to a ruptured aneurysm die before they reach the hospital. Another 15% die within a few weeks because the aneurysm starts bleeding again. Procedures to treat the aneurysm (placing a device using a catheter or doing surgery to open the skull) can reduce the risk that the aneurysm will bleed again. Without treatment, people who survive for 6 months have a 3% chance of another rupture each year.

The outlook is better when the cause is an arteriovenous malformation.

Occasionally, the hemorrhage is caused by a small defect that is not detected by cerebral angiography because the defect has already sealed itself off. In such cases, the outlook is very good.

Some people recover most or all mental and physical function after a subarachnoid hemorrhage. However, many people continue to have symptoms such as weakness, paralysis, loss of sensation on one side of the body, or difficulty using and understanding language, despite timely treatment.

People who may have had a subarachnoid hemorrhage are hospitalized immediately. When possible, they are transported to a center that specializes in treating stroke. Bed rest with no exertion is essential.

Anticoagulants (such as heparin and warfarin) and antiplatelet drugs (such as aspirin) are not given because they make the bleeding worse.

Pain relievers (analgesics) such as opioids (but not aspirin or other nonsteroidal anti-inflammatory drugs, which can worsen the bleeding) are given to control the severe headaches. Stool softeners are given to prevent straining during bowel movements. Such straining puts pressure on blood vessels within the skull and increases the risk that a weakened artery will rupture.

Nimodipine, a calcium channel blocker, is usually given by mouth to prevent vasospasm and subsequent ischemic stroke. Doctors take measures (such as giving drugs and adjusting the amount of intravenous fluid given) to keep blood pressure at levels low enough to avoid further hemorrhage and high enough to maintain blood flow to the damaged parts of the brain.

is treated only if it is very high.

Occasionally, a piece of plastic tubing (shunt) may be placed in the brain to drain cerebrospinal fluid away from the brain. This procedure relieves pressure and prevents hydrocephalus.

For people who have an aneurysm, a surgical procedure is done to isolate, block off, or support the walls of the weak artery and thus reduce the risk of fatal bleeding later. These procedures are difficult, and regardless of which one is used, the risk of death is high, especially for people who are in a stupor or coma.

The best time for surgery is controversial and must be decided based on the person’s situation. If the person can be aroused, most neurosurgeons recommend operating within 24 hours of the start of symptoms, before hydrocephalus and vasospasm develop. If surgery cannot be done this quickly, the procedure may be delayed 10 days to reduce the risks of surgery, but then bleeding is more likely to recur because the waiting period is longer.

One of the following surgical procedures (called endovascular surgery) is used to repair an aneurysm:

Endovascular coiling is commonly used. It involves inserting coiled wires into the aneurysm. For this procedure, a catheter is inserted into an artery, usually in the groin, and threaded to the affected artery in the brain. A contrast agent is injected to enable the doctor to make the aneurysm visible on an x-ray. The catheter is then used to place the coils in the aneurysm. Thus, this procedure does not require that the skull be opened. By slowing blood flow through the aneurysm, the coils promote clot formation, which seals off the aneurysm and prevents it from rupturing. Endovascular coils can be placed at the same time as cerebral angiography, when the aneurysm is diagnosed. The coils remain in place permanently.

In endovascular stenting, a catheter is used to place a tube made of wire (stent) across the opening of the aneurysm. The stent reroutes normal blood flow around the aneurysm, preventing blood from entering the aneurysm and eliminates the risk of rupture. The stent remains in place permanently.