Full review/revision Oct 2022
VIEW PROFESSIONAL VERSION
GET THE QUICK FACTS
Topic Resources
Alopecia areata is sudden loss of patches of hair when there is no obvious cause such as a skin or general internal disorder.

(See also Overview of Hair Growth Overview of Hair Growth Hair originates in the hair follicles. These follicles are located in the dermis, which is the skin layer between the epidermis (the surface layer) and the fat layer (also called the subcutaneous... read more and Hair Loss [Alopecia] Alopecia (Hair Loss) Hair loss, also called alopecia, can occur on any part of the body. Hair loss that occurs on the scalp is generally called baldness. Hair loss is often of great concern to people for cosmetic... read more 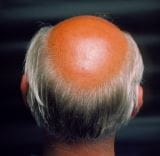 Alopecia areata is common. It occurs in both sexes and at all ages but is most common among children and young adults.

The cause of alopecia areata is believed to be an autoimmune reaction Autoimmune Disorders An autoimmune disorder is a malfunction of the body's immune system that causes the body to attack its own tissues. What triggers an autoimmune disorder is not known. Symptoms vary depending... read more in which the body’s immune defenses mistakenly attack the hair follicles. Alopecia areata is not the result of another disorder, but some people may also have a coexisting thyroid disorder or vitiligo Vitiligo Vitiligo is a loss of melanocytes that causes patches of skin to turn white. Patches of whitened skin are present on various parts of the body. Doctors usually base the diagnosis on the appearance... read more

The nails may become pitted or rough, or the half moon at the base of the nails (the lunula) may be red.

To rule out other disorders, doctors may do testing.

Other treatments for alopecia areata involve applying chemicals, such as anthralin, diphenylcyclopropenone, or squaric acid dibutylester to the scalp to induce a mild irritant reaction or mild allergic reaction, which sometimes promotes hair growth. These treatments are usually given to people who have widespread hair loss and who have not been helped by other treatments.

For more severe cases, people may be given methotrexate taken by mouth. This drug may be combined with corticosteroids taken by mouth. Baricitinib, one of the drugs called Janus kinase (JAK) inhibitors (which are used in treating other autoimmune and blood disorders), is useful in treating alopecia areata.

The doctor and person may choose to allow alopecia areata to resolve on its own, which sometimes happens without treatment in more mild cases. In some people, the hair may grow back in several months. In people with widespread hair loss, regrowth is less likely.