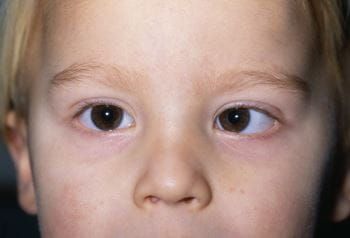 Strabismus (Esotropia)
Strabismus is misalignment of the eyes, which causes deviation from the parallelism of normal gaze. Diagnosis is clinical, including observation of the corneal light reflex and use of a cover test. Treatment may include correction of visual impairment with patching and corrective lenses, alignment by corrective lenses, and surgical repair.

Several varieties of strabismus have been described, based on direction of deviation, specific conditions under which deviation occurs, and whether deviation is constant or intermittent. Description of these varieties requires the definition of several terms:

A tropia is a manifest deviation, detectable with both eyes open (so that vision is binocular). A tropia can be constant or intermittent and may involve one eye or both eyes.

A phoria is a latent deviation, detectable only when one eye is covered so that vision is monocular. The deviation in a phoria is latent because the brain, using the extraocular muscles, corrects the minor misalignment.

A comitant deviation has the same amplitude or degree of misalignment in all gaze directions.

An incomitant deviation varies in amplitude or degree of misalignment depending on gaze direction.

Most strabismus is caused by

or other serious ocular defects and neurologic disease.

Risk factors for infantile strabismus include family history (1st- or 2nd-degree relative), genetic disorders (Down syndrome Down Syndrome (Trisomy 21) Down syndrome is an anomaly of chromosome 21 that can cause intellectual disability, microcephaly, short stature, and characteristic facies. Diagnosis is suggested by physical anomalies and... read more

and Crouzon syndrome), prenatal drug exposure Prenatal Drug Exposure Alcohol and illicit drugs are toxic to the placenta and developing fetus and can cause congenital syndromes and withdrawal symptoms. Prescription drugs also may have adverse effects on the fetus... read more (including alcohol), prematurity Premature Infants An infant born before 37 weeks gestation is considered premature. Prematurity is defined by the gestational age at which infants are born. Previously, any infant weighing read more or low birth weight, congenital eye defects Congenital Eye Abnormalities Eyes can be absent, deformed, or incompletely developed at birth. (See also Introduction to Congenital Craniofacial and Musculoskeletal Disorders and Overview of Congenital Craniofacial Abnormalities... read more

Acquired strabismus can develop acutely or gradually. Causes of acquired strabismus include refractive error Overview of Refractive Error In the emmetropic (normally refracted) eye, entering light rays are focused on the retina by the cornea and the lens, creating a sharp image that is transmitted to the brain. The lens is elastic... read more (high hyperopia), tumors (eg, retinoblastoma Retinoblastoma Retinoblastoma is a cancer arising from the immature retina. Symptoms and signs commonly include leukocoria (a white reflex in the pupil), strabismus, and, less often, inflammation and impaired... read more

Esotropia is commonly infantile. Infantile esotropia is considered idiopathic, although an anomaly of fusion is the suspected cause. Accommodative esotropia, a common variety of acquired esotropia, develops between 2 years and 4 years of age and is associated with hyperopia. Sensory esotropia occurs when severe visual loss (due to conditions such as cataracts, optic nerve anomalies, or tumors) interferes with the brain’s effort to maintain ocular alignment.

Esotropia can be paralytic, so designated because the cause is a 6th (abducens) cranial nerve palsy Sixth Cranial (Abducens) Nerve Palsy Sixth cranial nerve palsy affects the lateral rectus muscle, impairing eye abduction. The eye may be slightly adducted when the patient looks straight ahead. The palsy may be secondary to nerve... read more , but it is an uncommon cause. Esotropia can also be a component of a syndrome. Duane syndrome (congenital absence of the abducens nucleus with anomalous innervation of the lateral rectus extraocular muscle by the 3rd [oculomotor] cranial nerve) and Möbius syndrome (anomalies of multiple cranial nerves) are specific examples.

Exotropia is most often intermittent and idiopathic. Less often, exotropia is constant and paralytic, as with infantile exotropia or 3rd (oculomotor) cranial nerve palsy Third Cranial (Oculomotor) Nerve Disorders Third cranial nerve disorders can impair ocular motility, pupillary function, or both. Symptoms and signs include diplopia, ptosis, and paresis of eye adduction and of upward and downward gaze... read more .

Hypotropia can be restrictive, caused by mechanical restriction of full movement of the globe rather than neurologic interference with eye movement. For example, restrictive hypotropia can result from a blowout fracture of the orbit floor or walls. Less commonly, restrictive hypotropia can be caused by Graves ophthalmopathy Hypothyroidism in Infants and Children Hypothyroidism is thyroid hormone deficiency. Symptoms in infants include poor feeding and growth failure; symptoms in older children and adolescents are similar to those of adults but also... read more (thyroid eye disease). Third cranial nerve palsy and Brown syndrome (congenital or acquired tightness and restriction of the superior oblique muscle tendon) are other uncommon causes.

Symptoms and Signs of Strabismus

Unless severe, phorias rarely cause symptoms of strabismus. If symptomatic, phorias typically cause asthenopia (eye strain).

Tropias sometimes result in symptoms. For example, torticollis may develop to compensate for the brain’s difficulty in fusing images from misaligned eyes and to reduce diplopia. Some children with tropias have normal and equal visual acuity; however, amblyopia frequently develops with tropias and is due to cortical suppression of the image in the deviating eye to avoid confusion and diplopia.

Strabismus can be detected during well-child checkups through the history and eye examination. Evaluation should include questions about family history of amblyopia or strabismus and, if family or caregivers have noticed deviation of gaze, questions about when the deviation began, when or how often it is present, and whether there is a preference for using one eye for fixation. Physical examination should include an assessment of visual acuity, pupil reactivity, and the extent of extraocular movements. Slit-lamp examination is done to detect signs of cataract, and funduscopic examination is done to detect signs of structural defects or pathology of disorders such as retinoblastoma. Neurologic examination, particularly of the cranial nerves, is important.

The corneal light reflex test is a good screening test, but it is not very sensitive for detecting small deviations. The child looks at a light and the light reflection (reflex) from the pupil is observed; normally, the reflex appears symmetric (ie, in the same location on each pupil). The light reflex for an exotropic eye is nasal to the pupillary center, whereas the reflex for an esotropic eye is temporal to the pupillary center. Vision screening machines operated by trained personnel are being used to identify children at risk.

When doing the cover test, the child is asked to fixate on an object. One eye is then covered while the other is observed for movement. No movement should be detected if the eyes are properly aligned, but manifest strabismus is present if the uncovered eye shifts to establish fixation once the other eye, which had fixed on the object, is covered. The test is then repeated on the other eye.

In a variation of the cover test, called the alternate uncover test, the child is asked to fixate on an object while the examiner alternately covers one eye and then the other, back and forth. An eye with a latent strabismus shifts position when it is uncovered. In exotropia, the eye that was covered turns in to fixate when the cover is removed; in esotropia, it turns out to fixate when the cover is removed. Deviations can be quantified by using prisms positioned such that the deviating eye need not move to fixate. The power of the prism is used to quantify the deviation and provide a measurement of the magnitude of misalignment of the visual axes. The unit of measurement used by ophthalmologists is the prism diopter. One prism diopter is a deviation of the visual axes of 1 cm at 1 m.

Strabismus should be distinguished from pseudostrabismus, which is the appearance of esotropia in a child with good visual acuity in both eyes but a wide nasal bridge or broad epicanthal folds that obscure much of the white sclera nasally when looking laterally. The light reflex and cover tests are normal in a child with pseudostrabismus.

Neuroimaging may be necessary to identify the cause of acquired cranial nerve palsies. In addition, genetics evaluation may be beneficial for certain ocular malformations.

Strabismus should not be ignored on the assumption that it will be outgrown. Permanent vision loss can occur if strabismus and its attendant amblyopia are not treated before age 4 to 6 years; children treated later respond somewhat, but once the visual system has matured (typically by age 8), response is minimal. As a result, all children should have formal vision screening in the preschool years.

Treatment of strabismus aims to equalize vision and then align the eyes. Treatment of children with amblyopia Treatment Amblyopia is functional reduction in visual acuity of an eye caused by disuse during visual development. Severe loss of vision can occur in the affected eye if amblyopia is not detected and... read more requires measures to encourage use of the amblyopic eye, such as patching the better eye or administering atropine drops into the better eye to provide a visual advantage to the amblyopic eye; improved vision offers a better prognosis for development of binocular vision and for stability if surgery is done. Patching is not, however, a treatment for strabismus. Eyeglasses or contact lenses are sometimes used if the amount of refractive error is significant enough to interfere with fusion, especially in children with accommodative esotropia. Orthoptic eye exercises can help correct intermittent exotropia with convergence insufficiency.

Surgical repair is generally done when nonsurgical methods are unsuccessful in aligning the eyes satisfactorily. Surgical repair consists of loosening (recession) and tightening (resection) procedures, most often involving the horizontal rectus muscles, and is most often done bilaterally. Surgical repair is typically done in an outpatient setting. Rates for successful realignment can exceed 80%. The most common complications are overcorrection or undercorrection and recurrence of strabismus later in life. Rare complications include infection, excessive bleeding, and vision loss.

Overview of Gastrointestinal Disorders in Neonates and Infants