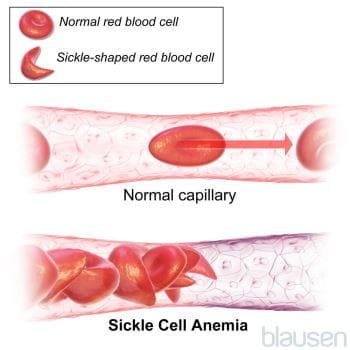 The sickle cells are fragile and break apart easily. Because the sickle cells are stiff, they have difficulty traveling through the smallest blood vessels (capillaries), blocking blood flow and reducing oxygen supply to tissues in areas where capillaries are blocked. The blockage of blood flow can cause pain and, over time, cause damage to the spleen, kidneys, brain, bones, and other organs. Kidney failure Chronic Kidney Disease Chronic kidney disease is a slowly progressive (months to years) decline in the kidneys’ ability to filter metabolic waste products from the blood. Major causes are diabetes and high blood pressure... read more and heart failure Heart Failure (HF) Heart failure is a disorder in which the heart is unable to keep up with the demands of the body, leading to reduced blood flow, back-up (congestion) of blood in the veins and lungs, and/or... read more

People who have sickle cell disease always have some degree of anemia (often causing fatigue, weakness, and paleness) and may have mild jaundice Jaundice in Adults In jaundice, the skin and whites of the eyes look yellow. Jaundice occurs when there is too much bilirubin (a yellow pigment) in the blood—a condition called hyperbilirubinemia. (See also Overview... read more

(yellowing of the skin and eyes). Some people have few other symptoms. Others have severe, recurring symptoms that cause enormous disability and early death.

In people with sickle cell trait, red blood cells are not fragile and do not break easily. Sickle cell trait does not cause painful crises, but rarely, people die suddenly while undergoing very strenuous exercise that causes severe dehydration, such as during military or athletic training.

People with sickle cell trait are at increased risk of chronic kidney disease Chronic Kidney Disease Chronic kidney disease is a slowly progressive (months to years) decline in the kidneys’ ability to filter metabolic waste products from the blood. Major causes are diabetes and high blood pressure... read more and pulmonary embolism Pulmonary Embolism (PE) Pulmonary embolism is the blocking of an artery of the lung (pulmonary artery) by a collection of solid material brought through the bloodstream (embolus)—usually a blood clot (thrombus) or... read more . Rarely, they may notice blood in their urine. People with sickle cell trait are also at risk for an extremely rare form of kidney cancer.

Anything that reduces the amount of oxygen in the blood, such as vigorous exercise, mountain climbing, flying at high altitudes without sufficient oxygen, or an illness, may bring on a sickle cell crisis (also called an exacerbation). A sickle cell pain (vaso-occlusive) crisis is an episode of increased symptoms and can consist of a sudden worsening of anemia, pain (often in the abdomen or long bones of the arms and legs), fever, and sometimes shortness of breath. Abdominal pain may be severe, and vomiting may occur. Sometimes, additional complications occur with a pain crisis, including

In children, acute sequestration of sickled cells in the spleen (sequestration crisis) may occur causing an enlarged spleen and exacerbating anemia. Acute hepatic sequestration is less common and can occur at any age.

Most people who have sickle cell disease develop an enlarged spleen Enlarged Spleen An enlarged spleen is not a disease in itself but the result of an underlying disorder. Many disorders can make the spleen enlarge. Many disorders, including infections, anemias, and cancers... read more during childhood because sickled cells become trapped in the spleen. By the time the person reaches adolescence, the spleen is often so badly injured that it shrinks and no longer functions. Because the spleen helps fight infection, people with sickle cell disease are more likely to develop pneumococcal pneumonia Pneumococcal Infections Pneumococcal infections are caused by the gram-positive, sphere-shaped (coccal) bacteria (see figure How Bacteria Shape Up) Streptococcus pneumoniae (pneumococci). These bacteria commonly cause... read more and other infections. Viral infections, in particular, can decrease red blood cell production, so anemia becomes more severe.

often form from the pigment of broken-apart red blood cells.

The heart usually enlarges, and an enlarged heart is less effective in pumping blood to the body, possibly leading to heart failure Heart Failure (HF) Heart failure is a disorder in which the heart is unable to keep up with the demands of the body, leading to reduced blood flow, back-up (congestion) of blood in the veins and lungs, and/or... read more

Children who have sickle cell disease often have a relatively short torso but long arms, legs, fingers, and toes. Changes in the bones and bone marrow may cause bone pain, especially in the hands and feet. Episodes of joint pain with fever may occur, and the hip joint may become so damaged that it eventually needs to be replaced.

Poor circulation to the skin may cause sores on the legs, especially at the ankles. Young men may develop persistent, often painful erections (priapism Persistent Erection Persistent erection (priapism) is a painful, persistent, abnormal erection unaccompanied by sexual desire or excitation. It is most common in boys aged 5 to 10 years and in men aged 20 to 50... read more ). Episodes of priapism may permanently damage the penis so that the man can no longer have erections. Blocked blood vessels may cause strokes that damage the nervous system. In older people, lung and kidney function may deteriorate.

Doctors recognize anemia, stomach and bone pain, and nausea in a young black person as possible signs of a sickle cell crisis. When doctors suspect sickle cell disease, they do blood tests. Sickle-shaped red blood cells and fragments of destroyed red blood cells can be seen in a blood sample examined under a microscope.

Further testing may be needed, depending on the specific symptoms the person experiences during the crisis. For example, if the person has difficulty breathing or a fever, a chest x-ray may be done.

Blood tests are done on relatives of people with the disorder because they also may have sickle cell disease or trait. Discovering the trait in people may be important for family planning, to determine their risk of having a child with sickle cell disease.

Newborns are routinely screened with a blood test in the United States.

Treatment is aimed at

Gene therapy, a technique in which normal genes are implanted in precursor cells (cells that produce blood cells), is being studied.

Drugs can help control sickle cell disease. For example, hydroxyurea increases the production of a form of hemoglobin found predominantly in fetuses, which decreases the number of red blood cells becoming sickle-shaped. Therefore, it reduces the frequency of sickle cell crises and acute chest syndrome. New drugs that help control the symptoms and complications of sickle cell disease are L-glutamine, crizanlizumab, and voxelotor.

People are given folic acid, a vitamin that helps the body make new red blood cells.

may be given to correct the anemia.

Sickle cell crisis may require hospitalization. People are given fluid by vein (intravenously) and drugs to relieve pain. Blood transfusions Overview of Blood Transfusion A blood transfusion is the transfer of blood or a blood component from one healthy person (a donor) to a sick person (a recipient). Transfusions are given to increase the blood's ability to... read more

and oxygen are given for anemia that is severe enough to pose a risk of stroke, heart attack, or lung damage. Conditions that may have caused the crisis, such as an infection, are treated.