Urine Culture
Bacterial meningitis is a serious infection of the layers of tissue covering the brain and spinal cord (meninges Meninges The brain’s functions are both mysterious and remarkable, relying on billions of nerve cells and the internal communication between them. All thoughts, beliefs, memories, behaviors, and moods... read more

Although meningitis can occur in all children, children at particular risk of meningitis include those with sickle cell disease Sickle Cell Disease Sickle cell disease is an inherited genetic abnormality of hemoglobin (the oxygen-carrying protein found in red blood cells) characterized by sickle (crescent)-shaped red blood cells and chronic... read more 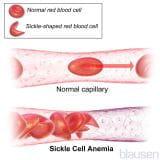 and those lacking a spleen Overview of the Spleen The spleen, a spongy, soft organ about as big as a person’s fist, is located in the upper left part of the abdomen, just under the rib cage. The splenic artery brings blood to the spleen from... read more . Children with birth defects of the face and skull may have defects in the bones that allow bacteria access to the meninges. Children who have a weakened immune system, such as those with AIDS or those who have received chemotherapy, are more susceptible to meningitis.

Causes of Meningitis in Children

Meningitis in newborns usually results from an infection of the bloodstream (sepsis Sepsis and Septic Shock Sepsis is a serious bodywide response to bacteremia or another infection plus malfunction or failure of an essential system in the body. Septic shock is life-threatening low blood pressure ... read more ). The infection is typically caused by bacteria acquired from the birth canal, most commonly group B streptococci, Escherichia coli, and Listeria monocytogenes.

Older infants and children usually develop infection through contact with respiratory secretions (such as saliva or mucus from the nose) containing the bacteria that cause meningitis. Bacteria that infect older infants and children include Streptococcus pneumoniae and Neisseria meningitidis. Haemophilus influenzae type b was the most common cause of meningitis, but widespread vaccination Childhood Vaccination Schedule Most doctors follow the vaccination schedule recommended by the Centers for Disease Control and Prevention (CDC—see the schedule for infants and children and the schedule for older children... read more against that organism has now made it a rare cause. Current vaccines against Streptococcus pneumoniae (called pneumococcal conjugate vaccines Pneumococcal Vaccine read more ) and Neisseria meningitidis (called meningococcal conjugate vaccines Meningococcal Vaccine read more ) also are making these organisms rare causes of childhood meningitis.

Symptoms of Meningitis in Children

Symptoms of meningitis vary by age. Once children develop symptoms involving their brain (such as abnormal drowsiness or confusion), meningitis can progress very quickly. As many as 15% of children who have bacterial meningitis are unconscious (comatose) or nearly unconscious by the time they are taken to a hospital.

Newborns and children under 12 months of age

Newborns and children under 12 months of age rarely develop a stiff neck (a common symptom in older children) and are unable to communicate specific discomfort. In these younger children, important signs of illness that should alert parents to a possibly serious problem include

About one third of newborns who have bacterial meningitis have seizures Seizures in Children Seizures are a periodic disturbance of the brain’s electrical activity, resulting in some degree of temporary brain dysfunction. When older infants or young children have seizures, they often... read more . And about one in five infants and young children who have bacterial meningitis have seizures. Occasionally, the nerves controlling some eye and facial movements may be damaged by the bacteria, causing an eye to turn inward or outward or the facial expression to become lopsided.

In about 33 to 50% of newborns with meningitis, increased pressure of the fluid around the brain may make the fontanelles (the soft spots between the skull bones) bulge or feel firm. These symptoms usually develop over at least 1 to 2 days, but some infants, particularly those between birth and 3 or 4 months of age, become ill very rapidly, progressing from health to near death in less than 24 hours.

Rarely, certain bacteria cause pockets of pus (abscesses) to form within the brain of infants with meningitis. As the abscesses grow, pressure on the brain increases (called intracranial pressure), resulting in vomiting, head enlargement, and bulging fontanelles.

Diagnosis of Meningitis in Children

A doctor diagnoses bacterial meningitis by removing a sample of cerebrospinal fluid obtained through a procedure called a spinal tap Spinal Tap Diagnostic procedures may be needed to confirm a diagnosis suggested by the medical history and neurologic examination. Electroencephalography (EEG) is a simple, painless procedure in which... read more

(lumbar puncture). The fluid is analyzed, and any bacteria in that sample are examined and grown (cultured Culture of Microorganisms Infectious diseases are caused by microorganisms, such as bacteria, viruses, fungi, and parasites. Doctors suspect an infection based on the person's symptoms, physical examination results,... read more ) in a laboratory for identification. Sometimes the symptoms of bacterial meningitis are caused by other infections, such as inflammation of the brain (encephalitis Encephalitis Encephalitis is inflammation of the brain that occurs when a virus directly infects the brain or when a virus, vaccine, or something else triggers inflammation. The spinal cord may also be involved... read more ) or another type of meningitis that is not caused by bacteria, so the sample is also examined to look for and rule out these other causes of the child's symptoms.

Sometimes a spinal tap cannot be done because the child has signs of increased pressure on the brain, a brain injury, or a bleeding disorder. In these instances, doctors also do blood cultures to look for bacteria in the bloodstream. These children will get a spinal tap as soon as it is safe to do it.

(CT), are imaging tests that may be used to determine the degree of pressure on the brain and whether an abscess is present.

Prognosis for Meningitis in Children

), hearing loss Hearing Impairment in Children Hearing loss in newborns most commonly results from cytomegalovirus infection or genetic defects and in older children results from ear infections or earwax. If children do not respond to sounds... read more

, and intellectual disability Intellectual Disability Intellectual disability is significantly below average intellectual functioning present from birth or early infancy, causing limitations in the ability to conduct normal activities of daily... read more . Up to 30% have mild residual problems, such as learning disorders Learning Disorders Learning disorders involve an inability to acquire, retain, or broadly use specific skills or information, resulting from deficiencies in attention, memory, or reasoning and affecting academic... read more , mild hearing loss, or occasional seizures Seizures in Children Seizures are a periodic disturbance of the brain’s electrical activity, resulting in some degree of temporary brain dysfunction. When older infants or young children have seizures, they often... read more .

About 15 to 25% of older infants and children develop brain and nerve problems such as hearing loss, intellectual disability, and seizures.

Prevention of Meningitis in Children

Routine vaccinations Routine Vaccinations for Infants, Children, and Adolescents Most doctors follow the vaccination schedule recommended by the Centers for Disease Control and Prevention (CDC—see the schedule for infants and children and the schedule for older children... read more can prevent many cases of bacterial meningitis. People who have been in contact with someone who has meningitis are often given antibiotics to help prevent infection (called chemoprophylaxis). Women can be screened for group B streptococcus while pregnant and are given antibiotics at the time of delivery to prevent passing the bacteria to the newborn.

Doctors usually give antibiotics to people who have been in close contact with someone who has meningitis caused by Neisseria meningitidis or Haemophilus influenzae. Close contacts are defined somewhat differently depending on which of these two bacteria has caused the meningitis but they typically include

Chemoprophylaxis is given to close contacts as soon as the infected child has been identified. Ideally, it is given within 24 hours.

Drugs for chemoprophylaxis include rifampin, ceftriaxone, and ciprofloxacin and are selected depending on the age of the close contact.

Treatment of Meningitis in Children

Doctors give high doses of antibiotics by vein (intravenously) as soon as they suspect meningitis. Very sick children may receive antibiotics even before a spinal tap is done. When culture results from the spinal tap become available, doctors change the antibiotics, if needed, based on the type of bacteria causing the meningitis. The child's age also helps doctors determine which antibiotics to give.

Some children older than 6 weeks may be given corticosteroids (such as dexamethasone) by vein to help reduce the risk of hearing loss.

Sometimes a second blood culture and spinal tap are done to determine whether the antibiotics are working fast enough.