Some Causes and Features of Gas-Related Complaints

Gas is normally present in the digestive system and may be expelled through the mouth (belching) or through the anus (flatus).

There are three main gas-related complaints:

Belching is more likely to occur shortly after eating or during periods of stress. Some people feel a tightness in their chest or stomach just before belching that is relieved as the gas is expelled.

People who complain of flatulence often have a misconception of how much flatus people normally produce. There is great variability in the quantity and frequency of flatus. People typically have flatus about 13 to 21 times a day, amounting to ½ to 1½ quarts (0.5 to 1.5 liters), and some people pass flatus more or less often. Such gas may or may not have an odor.

Although flatus is flammable (due to the hydrogen and methane gas that it contains), this does not pose a routine problem. For example, working near open flames is not hazardous. However, there are rare reports of gas explosion during intestinal surgery and colonoscopy when electrical cautery was used in people whose bowels were incompletely cleaned out before the procedure.

In the past, colic Colic Colic refers to a specific pattern of excessive, intense crying and fussing that occurs without any apparent reason (for example, hunger, illness, or injury) in otherwise healthy infants. Colic... read more in infants 2 to 4 months of age was attributed to excessive abdominal gas. Today, however, most doctors do not think colic is related to gas, because tests do not show excess gas in the abdomen of these infants. The actual cause of colic remains unclear.

Causes of gas vary depending on the gas-related symptom.

Belching is caused by

People normally swallow small amounts of air while eating and drinking. However, some people unconsciously swallow larger amounts of air (aerophagia) repeatedly while eating or smoking and sometimes when they feel anxious or nervous. Excessive salivation, which may occur with gastroesophageal reflux, ill-fitting dentures, certain drugs, gum chewing, or nausea of any cause, also increases air swallowing.

Most swallowed air is later belched up, and very little passes from the stomach into the rest of the digestive system. The small amount of air that does pass into the intestines is mostly absorbed into the bloodstream and very little is passed as flatus.

Flatus results from hydrogen, methane, and carbon dioxide gases that are produced by the bacteria normally present in the large intestine. These bacteria always produce some gas, but excessive gas can be produced

Foods that increase gas production include any with poorly digestible carbohydrates (for example, dietary fiber such as in baked beans and cabbage), certain sugars (such as fructose), lactose-containing foods (such as milk), or sugar alcohols (such as sorbitol), and fats. For example, certain carbohydrates called fermentable oligosaccharides, disaccharides, monosaccharides, and polyols are collectively called FODMAPs. FODMAPs are poorly absorbed and rapidly fermented by bacteria in the intestines, leading to increased gas and discomfort. Sorbitol, an artificial sweetener used in some foods, drugs, and chewing gums, and fructose, a sugar in fruits, berries, and some plants, can increase gas production. Many people cannot digest the sugar lactose (a condition called lactose intolerance), which is in milk and other dairy products. Almost anyone who eats large amounts of vegetables or fruits develops some degree of flatulence.

Malabsorption syndromes Overview of Malabsorption Malabsorption syndrome refers to a number of disorders in which nutrients from food are not absorbed properly in the small intestine. Certain disorders, infections, and surgical procedures can... read more can increase gas production. People who have carbohydrate deficiencies (deficiencies of the enzymes that break down certain sugars), such as those with lactase deficiency, tend to produce large amounts of gas when they eat foods containing these sugars. Other malabsorption syndromes, such as tropical sprue Tropical Sprue Tropical sprue is a rare disorder of unknown cause affecting people living in tropical and subtropical areas who develop abnormalities of the lining of the small intestine, leading to malabsorption... read more , celiac disease Celiac Disease Celiac disease is a hereditary intolerance to gluten (a protein found in wheat, barley, and rye) that causes characteristic changes in the lining of the small intestine, resulting in malabsorption... read more

, and pancreatic insufficiency, also may lead to the production of large amounts of gas.

However, some people may simply have more or different bacteria naturally living in their digestive tract, or they may have a motility (movement) disorder of the muscles in their digestive tract. These variations may account for differences in flatus production. People can record their flatus frequency in a diary before being evaluated by a doctor.

A sensation of bloating or abdominal swelling (distention) can be present in people who have digestive disorders such as poor stomach emptying (gastroparesis) or irritable bowel syndrome Irritable Bowel Syndrome (IBS) Irritable bowel syndrome is a disorder of the digestive tract that causes recurring abdominal pain and constipation or diarrhea. Symptoms vary but often include lower abdominal pain, bloating... read more or other physical disorders such as ovarian cancer Ovarian Cancer Ovarian cancer, which typically starts on the surface of the ovaries, is not usually diagnosed until it is advanced. Ovarian cancer may not cause symptoms until it is large or has spread. If... read more or colon cancer Colorectal Cancer Family history and some dietary factors (low fiber, high fat) increase a person’s risk of colorectal cancer. Typical symptoms include bleeding during a bowel movement, fatigue, and weakness... read more

. Many drugs with anticholinergic affects can slow stomach emptying and cause bloating. Sometimes, the sensation is caused by disorders that do not involve the abdomen. For example, in some people, the only symptom of a heart attack is a feeling of bloating or a strong urge to belch. However, many people who feel bloated do not have any physical disorder.

Doctors are not sure what role intestinal gas plays in the sensation of bloating. Aside from people who drink carbonated beverages or swallow excessive air, most people who have a sensation of bloating actually do not have excessive gas in their digestive system. However, studies do show that some people, such as those who have irritable bowel syndrome, are particularly sensitive to normal amounts of gas. Similarly, people with eating disorders (such as anorexia nervosa or bulimia) often misperceive and are particularly stressed by symptoms such as bloating. Thus, the basic abnormality in people with gas-related symptoms may be an intestine that is extremely sensitive (hypersensitive intestine). A motility disorder may contribute to symptoms as well.

Most gas-related symptoms do not require immediate evaluation by a doctor. The following information can help people decide whether a doctor’s evaluation is needed and help them know what to expect during the evaluation.

In people with gas, certain symptoms and characteristics are cause for concern. They include

For excessive belching, the history is focused on finding the cause of air swallowing, especially dietary causes. For excessive flatus, doctors seek dietary causes and also symptoms of malabsorption (such as diarrhea and/or fatty, foul-smelling stool).

In people with any gas-related complaint, doctors need to understand the relationship between symptoms and meals (both timing and type and amount of food) and bowel movements. Doctors ask people about changes in frequency and color and consistency of stool. Doctors also need to know whether people have lost any weight.

In people with bloating or flatus, the physical examination is focused on finding signs of an underlying physical disorder (such as ovarian cancer). Doctors do abdominal, rectal, and (for women) pelvic examinations.

An exception is middle age or older people who develop persistent bloating or distention, particularly those who have not had digestive system symptoms in the past. For such people, doctors may do tests for cancer of the ovary and/or colon.

Doctors reassure people who have chronic bloating or flatus that their condition is not caused by another disorder and that these gas-related symptoms are not harmful to their health.

Bloating and belching are difficult to relieve because they are usually caused by unconscious air swallowing or an increased sensitivity to normal amounts of gas. If belching is the main problem, reducing the amount of air being swallowed can help, which is difficult because people usually are not aware of swallowing air. Avoiding chewing gum and eating more slowly in a relaxed atmosphere may help. Avoiding carbonated beverages helps some people. Doctors may also recommend that people try to minimize air swallowing by practicing open-mouth breathing from the diaphragm and fully control any associated upper digestive tract diseases (such as peptic ulcers Peptic Ulcer Disease A peptic ulcer is a round or oval sore where the lining of the stomach or duodenum has been eaten away by stomach acid and digestive juices. Peptic ulcers can result from Helicobacter pylori... read more 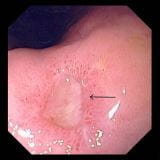 People who pass flatus excessively should avoid foods that are likely to cause flatus. Typically, people should eliminate one food or group of foods at a time. Thus, people can start by avoiding any known trigger foods and eliminating foods containing FODMAPs and/or they can eliminate foods such as beans and cabbage, then milk and dairy products,then fresh fruits, and then certain vegetables and other foods. Sorbitol and fructose should be consumed only in limited amounts. Roughage (such as bran and psyllium seeds) may be added to the diet to try to increase movement through the large intestine. However, additional roughage may make symptoms worse for some people.

Aromatic oils, such as oil of peppermint in a preparation that releases the oil slowly, may also help relieve gas pain.

Drugs do not provide much relief. Some doctors try anticholinergic drugs (such as bethanechol) and simethicone, which is present in some antacids and is also available by itself. However, there is little scientific evidence that these are of benefit.

Activated charcoal tablets can sometimes help reduce flatus and its unpleasant odor. However, charcoal stains the mouth and clothing. Charcoal-lined undergarments are available.

Probiotics, which are bacteria found naturally in the body that promote the growth of good bacteria, may reduce bloating and flatulence by promoting growth of normal intestinal bacteria in some people.

Some people with indigestion Treatment Indigestion is pain or discomfort in the upper abdomen. People may also describe the sensation as gassiness, a sense of fullness, or gnawing or burning. The sense of fullness may occur after... read more (dyspepsia) and upper abdominal fullness after a meal may be helped by antacids, a low dose of antidepressants (such as nortriptyline), or both to reduce a hypersensitive intestine.