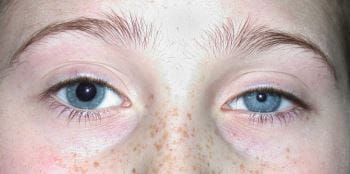 Some Causes and Features of Unequal Pupils

The Cornea, Pupil, and Iris

The pupil is the black center part of the eye. Pupils get larger (dilate) in dim light and smaller (constrict) in bright light. Usually both pupils are about the same size and respond to light equally. Unequal pupil size is called anisocoria.

If pupil sizes are very unequal, a person may notice the discrepancy. More often, unequal pupils are noticed only during a doctor's examination. Unequal pupils themselves usually cause no symptoms, but occasionally a person may have trouble focusing on near objects. Also, the underlying disorder sometimes causes other symptoms such as eye pain and redness, loss of vision, drooping eyelid, double vision, or headache. These more noticeable symptoms are often the reason people seek medical care rather than the unequal pupils.

The most common cause of unequal pupils is

Physiologic anisocoria is pupils that are naturally different in size. No disorder is present. About 20% of people have this lifelong condition, which is considered a normal variation. In such people, both pupils react normally to light and darkness and there are no symptoms.

Less commonly, people have unequal pupils because of

Either the larger or the smaller pupil may be the abnormal one depending on the cause. Often, the larger pupil is unable to constrict normally. However, sometimes, as in Horner syndrome Horner Syndrome Horner syndrome affects one side of the face, causing the eyelid to droop, the pupil to become small (constricted), and sweating to decrease. The cause is disruption of the nerve fibers that... read more

Eye disorders that cause unequal pupils include birth defects and eye injury. Also, certain drugs that get into the eye may affect the pupil. Such drugs may be drops intended to treat eye disorders (for example, homatropine used for certain inflammatory disorders or injuries or pilocarpine used for glaucoma), or they may be drugs or other substances that accidentally get into the eye (for example, scopolamine used as a patch for motion sickness, plants such as jimsonweed, or certain insecticides). Inflammation of the iris (iritis) and certain types of glaucoma cause unequal pupils, but this finding is usually overshadowed by severe eye pain.

). These pathways carry nerve impulses to the pupil and to the muscles that control the eye and eyelid. Thus, people with nervous system disorders that affect the pupil often also have a drooping eyelid, double vision, and/or visibly misaligned eyes. Brain disorders that can affect these pathways include strokes, brain hemorrhage (spontaneous or due to head injury), and, less commonly, certain tumors or infections. Disorders outside the brain that affect the sympathetic nervous system include tumors and injuries that involve the neck or upper part of the chest. Horner syndrome refers to the combination of a constricted pupil, drooping eyelid, and loss of sweating around the affected eye. Horner syndrome is caused by interruption of the sympathetic nerves to an eye due from any cause.

Doctors' first goal is to determine whether the pupils have always been unequal or whether there is another cause such as a drug or disorder. Then the goal is to decide whether the larger or the smaller pupil represents the problem. The following information can help people decide when a doctor's evaluation is needed and help them know what to expect during the evaluation.

In people with unequal pupils, certain symptoms and characteristics are cause for concern. They include

People with warning signs should see a doctor right away. People without warning signs but who have any other symptoms should call the doctor. The doctor can decide how quickly they need to be seen based on their symptoms. People who simply happen to have noticed unequal pupils and feel well can usually wait a week or two to see a doctor.

Doctors first ask questions about the person's symptoms and medical history, including questions about smoking. Doctors then do a physical examination. What they find during the history and physical examination often suggests a cause of the unequal pupils (see table Some Causes and Features of Unequal Pupils Some Causes and Features of Unequal Pupils The pupil is the black center part of the eye. Pupils get larger (dilate) in dim light and smaller (constrict) in bright light. Usually both pupils are about the same size and respond to light... read more

) and the tests that may need to be done.

The physical examination focuses on the head and eyes. Doctors examine the person's pupils in light and dark rooms. They examine whether the eyes move normally when the person follows a doctor's finger moving up, down, left, right, and toward the eyes. Doctors examine the entire eye, usually using a slit lamp What Is a Slit Lamp? A person who has eye symptoms should be checked by a doctor. However, some eye disorders cause few or no symptoms in their early stages, so the eyes should be checked regularly (every 1 to 2... read more (an instrument that enables a doctor to examine the eye under high magnification). Other eye symptoms are evaluated as necessary. Doctors may use eye drops to test how the pupils respond to drugs that cause the pupils to constrict or widen.

Sometimes doctors examine an old photograph of the person (for example, on the person's driver's license) to see whether pupils were previously unequal.

Typically, people with eye symptoms such as pain, redness, blurry vision, or light sensitivity have an eye disorder. People who have a droopy eyelid, double vision, headache, or balance difficulties have Horner syndrome or a 3rd cranial nerve paralysis (possibly due to a brain disorder). People whose only symptom is recent blurry vision, particularly when focusing on near objects, may have a pupil that has been widened by a drug. People with no other symptoms or abnormalities often have chronic conditions such as physiologic anisocoria, birth defects of the iris, or Adie (tonic) pupil (see table Some Causes and Features of Unequal Pupils Some Causes and Features of Unequal Pupils The pupil is the black center part of the eye. Pupils get larger (dilate) in dim light and smaller (constrict) in bright light. Usually both pupils are about the same size and respond to light... read more

Testing is usually unnecessary unless people have other symptoms. People with Horner syndrome Horner Syndrome Horner syndrome affects one side of the face, causing the eyelid to droop, the pupil to become small (constricted), and sweating to decrease. The cause is disruption of the nerve fibers that... read more

or 3rd cranial nerve paralysis Third Cranial Nerve (Oculomotor Nerve) Palsy A palsy of the 3rd cranial nerve can impair eye movements, the response of pupils to light, or both. These palsies can occur when pressure is put on the nerve or the nerve does not get enough... read more usually require magnetic resonance imaging (MRI) or computed tomography (CT). People who have Horner syndrome may also need a CT of the chest.

Treatment of unequal pupils is itself unnecessary. However, the underlying disorder may need to be treated.