Vaccination Preventing spread of chickenpox After exposure to chickenpox 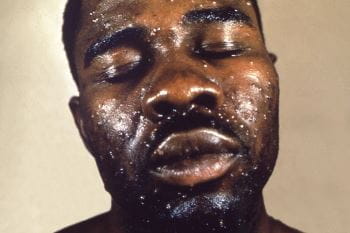 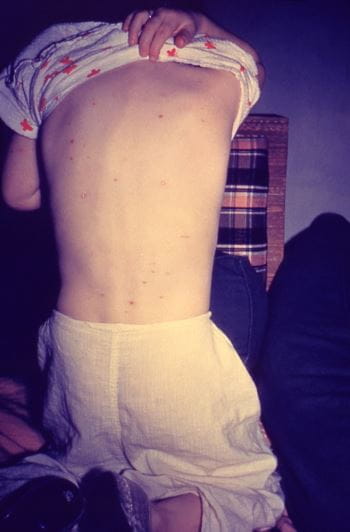 Chickenpox (Back)
Chickenpox is a highly contagious viral infection Overview of Viral Infections A virus is composed of nucleic acid, either DNA or RNA, surrounded by a protein coat. It requires a living cell in which to multiply. A viral infection can lead to a spectrum of symptoms from... read more with the varicella-zoster virus that causes a characteristic itchy rash, consisting of small, raised, blistered, or crusted spots.

Before the introduction of a vaccine in 1995, about 90% of children developed chickenpox by age 15. Now, the use of the vaccine has decreased the number of cases of chickenpox per year by approximately 90%. However, in some countries, the vaccine is not available or is not included as a routinely recommended childhood vaccine.

A person with chickenpox is contagious from 2 days before the rash appears and remains contagious until the last blisters have crusted.

A person who has had chickenpox develops immunity and cannot contract it again. However, the varicella-zoster virus remains inactive (dormant) in the body after an initial infection with chickenpox, sometimes reactivating in later life, causing shingles Shingles Shingles is a painful skin rash caused by a viral infection that results from reactivation of the varicella-zoster virus, the virus that causes chickenpox. What causes the virus to reactive... read more

Chickenpox is spread in the following ways:

Symptoms of chickenpox begin 7 to 21 days after infection occurs. They include

Younger children often do not have these symptoms, but symptoms are often severe in adults.

About 24 to 36 hours after the first symptoms begin, a rash of small, flat, red spots appears. The spots usually begin on the trunk and face, later appearing on the arms and legs. Some people have only a few spots. Others have them almost everywhere, including on the scalp and inside the mouth.

Within 6 to 8 hours, each spot becomes raised. It forms an itchy, round, fluid-filled blister against a red background and finally crusts. Spots continue to develop and crust for several days. A hallmark of chickenpox is that the rash develops in crops so that the spots are in various forms of development at any affected area. Very rarely, the spots become infected by bacteria, which can cause a severe skin infection (cellulitis Cellulitis Cellulitis is a spreading bacterial infection of the skin and the tissues immediately beneath the skin. This infection is most often caused by streptococci or staphylococci. Redness, pain, and... read more

New spots usually stop appearing by the fifth day, the majority are crusted by the sixth day, and most disappear in fewer than 20 days.

Sometimes children who have been vaccinated develop chickenpox. In these children, the rash is typically milder, fever is less common, and the illness is shorter. However, contact with the sores can spread the infection.

Spots in the mouth quickly rupture and form raw sores (ulcers), which often make swallowing painful. Raw sores may also occur on the eyelids and in the upper airways, rectum, and vagina. The worst part of the illness usually lasts 4 to 7 days.

Risk of complications from chickenpox is increased for newborns, adults, and people who have a weakened immune system or certain disorders.

Lung infection (pneumonia Overview of Pneumonia Pneumonia is an infection of the small air sacs of the lungs (alveoli) and the tissues around them. Pneumonia is one of the most common causes of death worldwide. Often, pneumonia is the final... read more

) occurs in about 1 out of 400 adults, resulting in cough and difficulty breathing. Pneumonia rarely develops in young children who have a normal immune system.

Inflammation of the liver and bleeding problems may also occur.

Reye syndrome Reye Syndrome Reye syndrome is a very rare but life-threatening disorder that causes inflammation and swelling of the brain and impairment and loss of function of the liver. The cause of Reye syndrome is... read more is a rare but very severe complication that occurs almost only in those younger than 18 following the use of aspirin. Therefore, aspirin should not be given to children with chickenpox. Reye syndrome may begin 3 to 8 days after the rash begins.

Pregnant women who get varicella are at risk of serious complications, such as pneumonia Overview of Pneumonia Pneumonia is an infection of the small air sacs of the lungs (alveoli) and the tissues around them. Pneumonia is one of the most common causes of death worldwide. Often, pneumonia is the final... read more

, and may die as a result. Chickenpox can also be transmitted to the fetus, especially if chickenpox develops during the 1st or early 2nd trimester. Such an infection can result in scars on the skin, birth defects, and a low birth weight.

A doctor is usually certain of the diagnosis of chickenpox because the rash and the other symptoms are so typical.

Blood tests to measure levels of antibodies in the blood and laboratory tests to identify the virus (usually using a sample scraped from the sores) are rarely needed. (Antibodies Antibodies One of the body's lines of defense (immune system) involves white blood cells (leukocytes) that travel through the bloodstream and into tissues, searching for and attacking microorganisms and... read more

are produced by the immune system to help defend the body against a particular attacker, such as the varicella-zoster virus.)

Healthy children nearly always recover from chickenpox without problems. Before routine immunization, about 4 million people developed chickenpox annually in the United States, and about 100 to 150 of them died each year because of complications of chickenpox.

In adults, chickenpox is more severe, and the risk of dying is higher.

When people who have been vaccinated Varicella Vaccine The varicella vaccine helps protect against chickenpox (varicella), a very contagious infection caused by the varicella-zoster virus. It causes an itchy rash that looks like small blisters with... read more develop chickenpox, the disease is less severe, and fewer of these people die.

The varicella vaccine Varicella Vaccine The varicella vaccine helps protect against chickenpox (varicella), a very contagious infection caused by the varicella-zoster virus. It causes an itchy rash that looks like small blisters with... read more contains weakened, live varicella virus. There are 3 formulations of the vaccine in the United States:

In the United States, children are routinely vaccinated against varicella-zoster. They are given two doses: one at 12 to 15 months of age, with the second given at 4 to 6 years of age (see Routine Vaccinations for Infants, Children, and Adolescents Routine Vaccinations for Infants, Children, and Adolescents Most doctors follow the vaccination schedule recommended by the Centers for Disease Control and Prevention (CDC—see the schedule for infants and children and the schedule for older children... read more ).

Older children and adults (particularly women of childbearing age and adults with chronic disorders) who have not had chickenpox and have not been vaccinated may also be vaccinated. They are given two doses 4 to 8 weeks apart.

Certain people should not be vaccinated:

After exposure to chickenpox

Susceptible people who are at high risk of complications and who have been exposed to someone with chickenpox may be given antibodies against the varicella virus (varicella-zoster immune globulin). These people include

Treatment with varicella-zoster immune globulin may prevent the infection or reduce its severity.

If healthy people have been exposed to chickenpox and have not already been vaccinated, vaccination within 3 to 5 days of exposure can help prevent chickenpox or reduce its severity.

Mild cases of chickenpox in children require only the treatment of symptoms. Wet compresses on the skin help soothe itching, which may be intense, and prevent scratching, which may spread the infection and cause scars. Because of the risk of bacterial infection, the skin is bathed often with soap and water, the hands are kept clean, the nails are clipped to minimize scratching, and clothing is kept clean and dry. If the itching is severe, drugs that relieve itching, such as antihistamines, may be given by mouth. Taking colloidal oatmeal baths may also help.

If a bacterial infection develops, antibiotics may be needed.

Doctors usually prescribe antiviral drugs Antiviral drugs A virus is composed of nucleic acid, either DNA or RNA, surrounded by a protein coat. It requires a living cell in which to multiply. A viral infection can lead to a spectrum of symptoms from... read more , such as acyclovir, valacyclovir, and famciclovir (see table Some Antiviral Drugs for Herpesvirus Infections Some Antiviral Drugs for Herpesvirus Infections Some common viral infections are caused by herpesviruses. Eight different herpesviruses infect people: Three herpesviruses—herpes simplex virus type 1, herpes simplex virus type 2, and varicella-zoster... read more ), by mouth to certain healthy people at risk of moderate to severe disease, including people

For people over 1 year of age who have a weakened immune system, doctors may prescribe acyclovir given by vein (IV).

Antiviral drugs can reduce the severity and duration of symptoms and should be given within 24 hours of the start of disease, if possible.