Melanoma that has spread 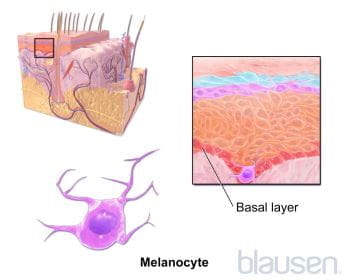 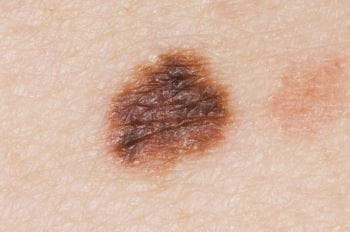 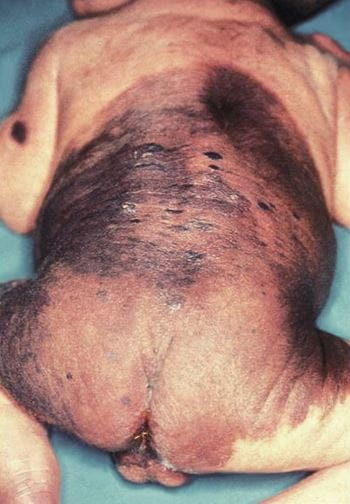 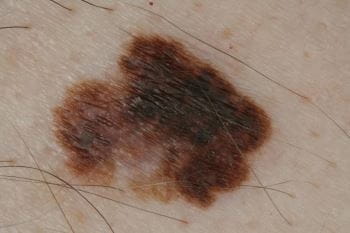 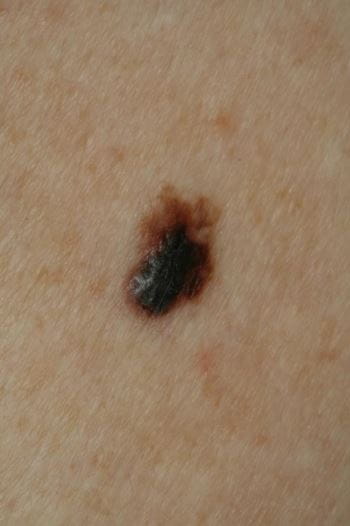 The ABCDEs of Melanoma
Melanoma is a skin cancer that begins in the pigment-producing cells of the skin (melanocytes).

Melanocytes are the pigment-producing cells in the skin that give skin its distinctive color. Sunlight stimulates melanocytes to produce more melanin (the pigment that darkens the skin) and increases the risk of melanoma.

Melanoma usually begins on normal skin as a new, small, pigmented growth, most often on sun-exposed areas. About one in three melanomas develops in a preexisting mole Moles Moles are small, usually dark, skin growths that develop from pigment-producing cells in the skin (melanocytes). Most people have some moles, but the tendency to develop atypical moles is sometimes... read more

. Melanoma may also occur around and inside the eyes, in the mouth, on the genitals and rectal areas, in the brain, and in the nail beds.

Melanoma readily spreads (metastasizes) to distant parts of the body, where it continues to grow and destroy tissue.

The two most common types of melanoma are

Risk factors for melanoma include the following:

People who have had melanoma are at increased risk of developing a new melanoma.

Melanoma is less common among people who have darker skin. When melanoma does develop in darker-skinned people, it often develops in the nail beds and on the palms and soles.

Although melanomas occur during pregnancy, pregnancy does not increase the likelihood that a mole will become a melanoma. Moles frequently change in size and darken during pregnancy.

All people should know the ABCDEs of melanoma The ABCDEs of Melanoma Melanoma is a skin cancer that begins in the pigment-producing cells of the skin (melanocytes). Melanomas can begin on normal skin or in existing moles. They may be irregular, flat or raised... read more

so they can check their moles for any malignant (cancerous) changes.

Less than 10% of melanomas produce no pigment. These so-called amelanotic melanomas may be pink, red, or slightly light-brown and may look like noncancerous growths or a form of nonmelanoma skin cancer.

A new mole or changes in a mole—such as enlargement (especially with an irregular border), darkening, inflammation, spotty color changes, bleeding, itching, tenderness, and pain—are warning signs of possible melanoma and so are the ABCDEs of melanoma The ABCDEs of Melanoma Melanoma is a skin cancer that begins in the pigment-producing cells of the skin (melanocytes). Melanomas can begin on normal skin or in existing moles. They may be irregular, flat or raised... read more

. If these or other findings lead doctors to suspect melanoma, they do a biopsy.

The ABCDEs of Melanoma

For the biopsy Biopsy Doctors can identify many skin disorders simply by looking at the skin. A full skin examination includes examination of the scalp, nails, and mucous membranes. Sometimes the doctor uses a hand-held... read more

Most darkly pigmented growths that are removed for biopsy are not melanoma but, rather, simple moles Moles Moles are small, usually dark, skin growths that develop from pigment-producing cells in the skin (melanocytes). Most people have some moles, but the tendency to develop atypical moles is sometimes... read more

. Nonetheless, removing even many harmless moles is preferable to allowing a single cancer to grow. Some growths are neither simple moles nor melanomas, but something in between. These growths, called atypical moles Atypical moles Moles are small, usually dark, skin growths that develop from pigment-producing cells in the skin (melanocytes). Most people have some moles, but the tendency to develop atypical moles is sometimes... read more

There are additional tools that doctors may use to help distinguish an atypical mole from a melanoma. These tools include polarized light and dermoscopy, which help to better evaluate the growths.

Melanoma may spread rapidly and cause death within months of diagnosis. The less a melanoma has grown deeper into the skin, the greater the chance that surgery will cure it. Almost 100% of the earliest, most shallow melanomas are cured by surgery. However, melanomas that have grown deeper than about 1/32 inch (about 1 millimeter) into the skin have a higher risk of metastasizing to the lymph nodes and blood vessels.

Once melanoma has metastasized to the lymph nodes, the 5-year survival rate ranges from 25 to 70% depending on how much of the skin over the melanoma has broken down (ulcerated) and the number of affected nodes.

Once melanoma has metastasized to distant parts of the body, the 5-year survival rate is about 10%. Some people live for less than 9 months. However, the course of the disease varies greatly and depends in part on the strength of the body’s immune defenses. Some people survive in apparent good health for several years despite the spread of the melanoma.

Because melanoma may be caused by long-term sun exposure Overview of Sunlight and Skin Damage Sunlight stimulates vitamin D production, helps control some chronic skin diseases (such as psoriasis), and causes a sense of well-being. However, sunlight can cause skin damage. Damage includes... read more

, people can help prevent this cancer by doing the following, starting in early childhood:

Doctors do not know with certainty whether these measures reduce the chances of people developing or dying of melanoma. However, sun protection does decrease the risk of developing basal cell carcinoma Basal Cell Carcinoma Basal cell carcinoma, the most common skin cancer, originates in certain cells of the outer layer of the skin (epidermis). Usually, a small, shiny bump appears on the skin and enlarges slowly... read more

, and using tanning beds, particularly by young people, does seem to increase the risk of melanoma.

Anyone who has had a melanoma is at risk of developing other melanomas. Therefore, such people need regular skin examinations. People who have many moles should have total body skin examinations at least once a year. People can be taught to examine themselves to detect changes in existing moles and to recognize features suggesting melanoma The ABCDEs of Melanoma Melanoma is a skin cancer that begins in the pigment-producing cells of the skin (melanocytes). Melanomas can begin on normal skin or in existing moles. They may be irregular, flat or raised... read more

. In people without risk factors, doctors do not know whether routine yearly skin examinations reduce the number of deaths from melanoma.

), taking a border of almost ½ inch (1 centimeter) or more of skin around the tumor.

Melanoma that has spread

If melanoma has spread to distant areas (metastasized), surgery is generally not an option, but sometimes localized areas of cancer (for example, the affected lymph nodes) may be surgically removed.

Targeted therapy consists of drugs that attack a cancer cell's innate biologic mechanisms. In targeted therapy, drugs identify abnormal genes that occur only in the cancerous cells. Newer drugs used in targeted therapy that can improve survival in melanoma that has spread include dabrafenib, encorafenib, and vemurafenib. These drugs can often target the actual cancer cells more accurately than older cancer chemotherapy drugs.

Chemotherapy Chemotherapy Chemotherapy involves the use of drugs to destroy cancer cells. Although an ideal drug would destroy cancer cells without harming normal cells, most drugs are not that selective. Instead, drugs... read more drugs such as dacarbazine and temozolomide can be given by vein to treat melanomas that have spread, but they do not prolong survival and are normally given to people who do not have other options.

Radiation therapy Radiation Therapy for Cancer Radiation is a form of intense energy generated by a radioactive substance, such as cobalt, or by specialized equipment, such as an atomic particle (linear) accelerator. Radiation preferentially... read more may be used in people whose cancer has spread to the brain.

See the following sites for comprehensive information about melanoma, including detection, prevention, treatment options, and other resources:

Tumors of the Nails