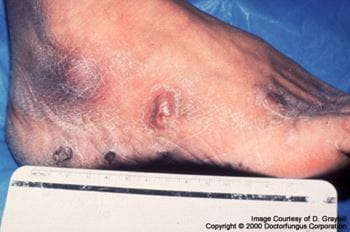 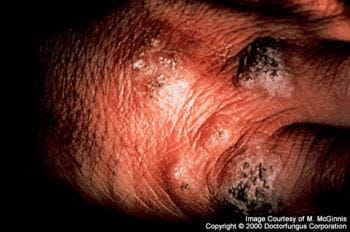 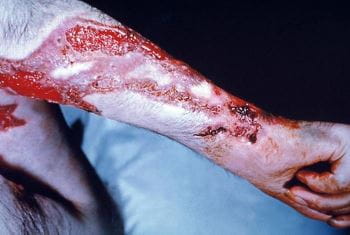 Sporotrichosis (Abscess)
Sporotrichosis is a cutaneous infection caused by the saprophytic mold Sporothrix schenckii. Pulmonary and hematogenous involvement is uncommon. Symptoms are cutaneous nodules that spread via lymphatics and break down into abscesses and ulcers. Diagnosis is by culture. Treatment is with itraconazole or amphotericin B.

Sporothrix schenckii resides on rose or barberry bushes, in sphagnum moss, and in other mulches. Horticulturists, gardeners, farm laborers, and timber workers are most often infected, typically after minor trauma involving contaminated material. In contrast to the other dimorphic fungi, S. schenckii is not usually inhaled but enters the body through small cuts and abrasions in the skin.

Symptoms and Signs of Sporotrichosis

Lymphocutaneous infections are most common. They characteristically involve one hand and arm, although they can occur anywhere on the body; primary lesions may occur on exposed surfaces of the feet or face.

A primary lesion may appear as a small, nontender papule or, occasionally, as a slowly expanding subcutaneous nodule that eventually becomes necrotic and sometimes ulcerates. Typically, a few days or weeks later, a chain of lymph nodes that drain the affected area begins to enlarge slowly but progressively, forming movable subcutaneous nodules. Without treatment, overlying skin reddens and may later necrose, sometimes causing an abscess, ulceration, and bacterial superinfection. Systemic symptoms and signs of infection are notably absent.

Lymphocutaneous sporotrichosis is chronic and indolent; it is potentially fatal only if bacterial superinfections cause sepsis.

Rarely, in patients without primary lymphocutaneous lesions, hematogenous spread leads to indolent infections of multiple peripheral joints, sometimes bones, and, less often, genitals, liver, spleen, kidneys, or meninges. These infections are more common among patients with immunocompromise due to another disorder (eg, alcohol use disorder). Equally rare is chronic pneumonia caused by inhaling spores and manifested by localized infiltrates or cavities, most often in patients with preexisting chronic lung disease.

The diagnosis of sporotrichosis is suspected based on clinical presentation in a patient with a history of possible exposure to the fungus (eg, gardener, landscaper, forester).

The characteristic nodular lymphangitis/cutaneous clinical presentation of sporotrichosis can also be caused by other pathogens, including Mycobacterium tuberculosis Tuberculosis (TB) Tuberculosis (TB) is a chronic, progressive mycobacterial infection, often with a period of latency following initial infection. TB most commonly affects the lungs. Symptoms include productive... read more

. Microbiologic diagnosis can usually be made when appropriate histologic stains and cultures of biopsied tissues are obtained (1 Diagnosis reference Sporotrichosis is a cutaneous infection caused by the saprophytic mold Sporothrix schenckii. Pulmonary and hematogenous involvement is uncommon. Symptoms are cutaneous nodules that spread via... read more

). During the early, nondisseminated stage, the primary lesion is sometimes misdiagnosed as a spider bite.

Culture of tissue from the active infection site provides the definitive diagnosis. S. schenckii yeasts can be seen only rarely in fixed-tissue specimens, even with special staining. Serologic tests are not available.

Oral itraconazole 200 mg orally once a day given until 2 to 4 weeks after all lesions have resolved (typically 3 to 6 months) is the treatment of choice.

Severe infection requires a lipid formulation of amphotericin B (3 to 5 mg/kg IV once a day); after a favorable response, treatment is switched to oral itraconazole for a total of 12 months of treatment. AIDS patients may require lifelong maintenance therapy with itraconazole for meningeal and disseminated infection. Posaconazole may have a role.