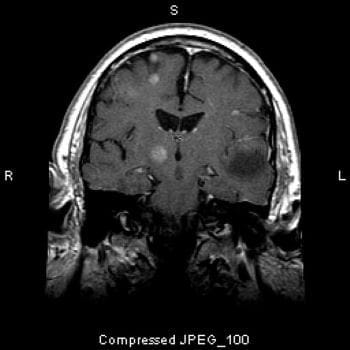 Intracranial tumors may involve the brain or other structures (eg, cranial nerves, meninges). The tumors usually develop during early or middle adulthood but may develop at any age; they are becoming more common among older people. Brain tumors are found in about 2% of routine autopsies.

Some tumors are benign, but because the cranial vault allows no room for expansion, even benign tumors can cause serious neurologic dysfunction or death.

There are 2 types of brain tumors:

Brain metastases are about 10 times more common than primary tumors. 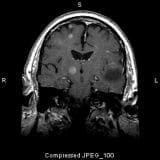 ) and patient age (see table Common Tumors by Age Common Brain Tumors by Age Intracranial tumors may involve the brain or other structures (eg, cranial nerves, meninges). The tumors usually develop during early or middle adulthood but may develop at any age; they are... read more

Neurologic dysfunction may result from the following:

A malignant tumor can develop new internal blood vessels, which can bleed or become occluded, resulting in necrosis and neurologic dysfunction that mimics stroke. Bleeding as a complication of metastatic tumors is most likely to occur in patients with melanoma, renal cell carcinoma, choriocarcinoma, or thyroid, lung, or breast cancer.

Benign tumors grow slowly. They may become quite large before causing symptoms, partly because often there is no cerebral edema. Malignant primary tumors grow rapidly but rarely spread beyond the central nervous system (CNS). Death results from local tumor growth and thus can result from benign as well as malignant tumors. Therefore, distinguishing between benign and malignant is prognostically less important for brain tumors than for other tumors.

Symptoms and Signs of Intracranial Tumors

Symptoms caused by primary tumors and metastatic tumors are the same. Many symptoms result from increased intracranial pressure:

Headache is the most common symptom. Headache may be most intense when patients awake from deep nonrapid eye movement (non-REM) sleep (usually several hours after falling asleep) because hypoventilation, which increases cerebral blood flow and thus intracranial pressure, is usually maximal during non-REM sleep. Headache is also progressive and may be worsened by recumbency or the Valsalva maneuver. When intracranial pressure is very high, the headache may be accompanied by vomiting, sometimes with little nausea preceding it.

Focal brain dysfunction causes some symptoms. Focal neurologic deficits, endocrine dysfunction, or focal seizures (sometimes with secondary generalization) may develop depending on the tumor’s location (see table Common Localizing Manifestations of Brain Tumors Common Localizing Manifestations of Primary Brain Tumors Intracranial tumors may involve the brain or other structures (eg, cranial nerves, meninges). The tumors usually develop during early or middle adulthood but may develop at any age; they are... read more 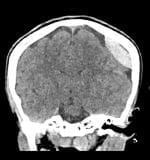 Early-stage brain tumors are often misdiagnosed. A brain tumor should be considered in patients with any of the following:

Similar findings can result from other intracranial masses (eg, abscess, aneurysm Brain Aneurysms Brain aneurysms are focal dilations in the cerebral arteries. In the US, brain aneurysms occur in 3 to 5% of people. Brain aneurysms can occur at any age but are most common among people aged... read more 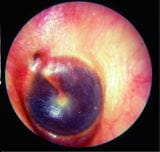 , granuloma, parasitic cysts such as neurocysticercosis Neurocysticercosis Parasitic helminthic worms infect the central nervous system (CNS) of millions of people in developing countries. Infected people who visit or immigrate to nonendemic areas, including the US... read more

Radiographic clues to the type of tumor, mainly location (see table Common Localizing Manifestations of Brain Tumors Common Localizing Manifestations of Primary Brain Tumors Intracranial tumors may involve the brain or other structures (eg, cranial nerves, meninges). The tumors usually develop during early or middle adulthood but may develop at any age; they are... read more

) and pattern of enhancement on MRI, may be inconclusive; brain biopsy, sometimes excisional biopsy, may be required.

Specialized tests (eg, molecular and genetic tumor markers in blood and CSF) can help in some cases. In patients with AIDS, Epstein-Barr virus titers in CSF typically increase as CNS lymphoma develops.

Brain herniation due to tumors is treated with mannitol 25 to 100 g infused IV, a corticosteroid (eg, dexamethasone 16 mg IV, followed by 4 mg orally or IV every 6 hours), and endotracheal intubation. Hyperventilation to a carbon dioxide partial pressure (PCO2) of 26 to 30 mm Hg can help decrease intracranial pressure temporarily in emergencies. Mass lesions should be surgically decompressed as soon as possible.

Increased intracranial pressure due to tumors but without herniation can be treated with corticosteroids (eg, dexamethasone 4 mg orally every 6 to12 hours or prednisone 30 to 40 mg orally twice a day).

Treatment of the brain tumor depends on pathology and location (for acoustic neuroma, see Acoustic Neuroma Vestibular Schwannoma A vestibular schwannoma, also called an acoustic neuroma, is a Schwann cell–derived tumor of the 8th cranial nerve. Symptoms include unilateral hearing loss. Diagnosis is based on audiology... read more ). Surgical excision should be used for diagnosis (excisional biopsy) and symptom relief. It may cure benign tumors. For tumors infiltrating the brain parenchyma, treatment is multimodal. Radiation therapy is required, and chemotherapy appears to benefit some patients.

If patients have an incurable tumor, end-of-life issues should be discussed, and palliative care Palliative Care and Hospice Dying patients can have needs that differ from those of other patients. So that their needs can be met, dying patients must first be identified. Before death, patients tend to follow 1 of 3... read more consultation should be considered.

Radiation therapy may be directed diffusely to the whole head for diffuse or multicentric tumors or locally for well-demarcated tumors.

Localized brain radiation therapy may be conformal, targeting the tumor with the aim of sparing normal brain tissue, or stereotactic, typically involving gamma knife or proton beam therapy. Gliomas are treated with conformal radiation therapy; a stereotactically directed gamma knife or proton beam therapy is useful for metastases. Current recommendations are to treat ≤ 4 metastatic lesions with stereotactic or other focal radiation interventions and to treat> 4 lesions with whole-brain radiation therapy (1 Treatment reference Intracranial tumors may involve the brain or other structures (eg, cranial nerves, meninges). The tumors usually develop during early or middle adulthood but may develop at any age; they are... read more

Degree of neurotoxicity depends on

In children or adults, early-delayed neurotoxicity can cause encephalopathy, which must be distinguished by MRI or CT from worsening or recurrent brain tumor. It may occur in children who have received prophylactic whole-brain radiation therapy for leukemia; they may develop somnolence, which lessens spontaneously over several days to weeks, possibly more rapidly if corticosteroids are used.

After radiation therapy to the neck or upper thorax, early-delayed neurotoxicity can result in a myelopathy, characterized by spinal symptoms such as Lhermitte sign (an electric shock-like sensation radiating down the back and into the legs when the neck is flexed). This early-delayed myelopathy typically resolves spontaneously.

After diffuse or whole-brain radiation therapy, many children and adults develop late-delayed neurotoxicity if they survive long enough. The most common cause in children is diffuse therapy given to prevent leukemia or to treat medulloblastoma. After diffuse therapy, the most common symptom is progressive dementia; adults may also develop an unsteady gait and focal neurologic symptoms. MRI or CT can show cerebral atrophy and often white matter loss.

MRI or CT shows a mass that may be enhanced by contrast agent and that may be difficult to distinguish from recurrence of the primary tumor. Excisional biopsy of the mass is diagnostic and often ameliorates symptoms.

Late-delayed myelopathy can develop after radiation therapy for extraspinal tumors (eg, due to Hodgkin lymphoma). It is characterized by progressive paresis and sensory loss, often as a Brown-Séquard syndrome (ipsilateral paresis and proprioceptive sensory loss, with contralateral loss of pain and temperature sensation). Most patients eventually become paraplegic.

Overview of Brain Tumors in Children