Snoring is a raspy noise produced in the nasopharynx during sleep. It is quite common, occurring in about 57% of men and 40% of women; prevalence increases with age. However, because a bed partner's perception of and response to snoring is highly subjective and because snoring varies from night to night, prevalence estimates vary widely.

The sound ranges from barely audible to an extremely bothersome noise that may be loud enough to hear in another room. Snoring is distressing usually to others (typically a bed partner or roommate trying to sleep) rather than the snorer; uncommonly, snorers wake up to the sound of their own snoring.

Snoring can have significant social consequences. It can cause strife between bed partners or roommates.

Other symptoms such as frequent awakenings, gasping or choking during sleep, excessive daytime sleepiness, and morning headaches may also be present, depending on the severity, cause, and consequences of the snoring.

Snoring results from airflow-induced flutter of soft tissues of the nasopharynx, particularly the soft palate. As in any fluttering physical structure (eg, a flag), flutter in the nasopharynx develops depending on interacting factors, including the mass, stiffness, and attachments of the fluttering element and the velocity and direction of airflow. The fact that people do not snore while awake suggests that sleep-induced muscular relaxation is at least part of the etiology because muscle tone is the only component of flutter that can change during sleep; tissue mass and attachments do not change. Furthermore, if pharyngeal dilators cannot keep the airway open in response to the negative intraluminal pressure induced by inspiration, the upper airway narrows, increasing local airflow velocity (for a given inspiratory volume). The increased flow velocity promotes flutter directly and decreases intraluminal pressure, further enhancing airway closure and thus promoting flutter and snoring.

Snoring is more likely to occur in airways that are already compromised by structural factors, including

Primary snoring is snoring that is not accompanied by awakening or excessive arousals, limitation of airflow, oxygen desaturation, or arrhythmias during sleep and that occurs in people who do not have excessive daytime sleepiness. Arousals are brief transitions to lighter sleep or awakenings that last < 15 seconds and are usually not noticed.

Snoring is usually a symptom of sleep-disordered breathing, which covers a spectrum ranging from upper airway resistance syndrome to obstructive sleep apnea Obstructive Sleep Apnea Obstructive sleep apnea (OSA) consists of episodes of partial or complete closure of the upper airway that occur during sleep and lead to breathing cessation (defined as a period of apnea or... read more (OSA). Each has similar upper airway obstructive pathophysiology but differs in degree and clinical consequences of the airway obstruction. The clinical consequences involve mainly disturbances of sleep and/or airflow.

Patients with obstructive sleep apnea have ≥ 5 episodes of apnea or hypopnea per hour during sleep (apnea/hypopnea index [AHI]) plus ≥ 1 of the following:

Obstructive sleep apnea can be categorized by severity:

Risk factors for snoring include

There may also be familial risk.

The primary goal is to identify snorers who are at high risk of having obstructive sleep apnea. Many snorers do not have OSA, but most patients with OSA snore (the precise proportion is not known).

Because several important manifestations of OSA are noticed mainly by others, bed partners or roommates should also be interviewed when possible.

History of present illness should cover severity of snoring, including its frequency, duration, and loudness. Also, the degree that snoring affects the bed partner should be noted.

Review of systems should seek symptoms suggesting obstructive sleep apnea, such as the presence of sleep disturbance as indicated by 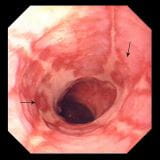 Examination should begin by measuring height and weight, with calculation of body mass index (BMI).

The rest of the examination should focus on inspecting the nose and mouth for evidence of obstruction. Signs include

The clinical evaluation is not completely reliable for diagnosis of obstructive sleep apnea but can be suggestive. Red flag findings clearly correlate with OSA. However, all of these findings occur along a continuum, and there is no widespread agreement on cut-off points and relative weighting. Nonetheless, the more red flag findings a patient has and the more severe they are, the greater the likelihood of OSA.

Testing is done when a diagnosis of obstructive sleep apnea is suspected; it consists of polysomnography (in laboratory or home sleep studies) Testing Almost half of all people in the US report sleep-related problems. Disordered sleep can cause emotional disturbance, memory difficulty, poor motor skills, decreased work efficiency, and increased... read more . However, because snoring is so common, polysomnography should be done only when clinical suspicion for OSA is significant. A reasonable approach is to test patients who have red flag findings (particularly witnessed apnea) as well as those who have several red flag findings but whose test scores (eg, STOP-BANG risk score for OSA) are not quite high enough for a diagnosis of OSA.

People with no symptoms or signs of sleep disturbance other than snoring may not need to be tested but should be clinically monitored for development of such manifestations.

Treatment of snoring associated with other conditions, such as chronic nasal obstruction Treatment Nasal congestion and rhinorrhea (runny nose) are extremely common problems that commonly occur together but occasionally occur alone. The most common causes (see table ) are the following: Viral... read more and obstructive sleep apnea Treatment Obstructive sleep apnea (OSA) consists of episodes of partial or complete closure of the upper airway that occur during sleep and lead to breathing cessation (defined as a period of apnea or... read more , are discussed elsewhere in THE MANUAL.

Several general measures can be used for primary snoring. Their efficacy has not been well-evaluated, primarily because perception of snoring is highly subjective; However, particular patients may benefit. Measures include

Oral appliances are worn only during sleep; they include

These appliances must be fitted by specially trained dentists. They are helpful for patients with OSA and are generally regarded as effective for simple snoring, although studies in this area are scant.

Mandibular advancement devices are most commonly used. These devices move the mandible and tongue forward relative to the maxilla and thus increase airway caliber during sleep. These devices can be adjusted incrementally after the initial fitting to optimize results.

CPAP devices Treatment Obstructive sleep apnea (OSA) consists of episodes of partial or complete closure of the upper airway that occur during sleep and lead to breathing cessation (defined as a period of apnea or... read more maintain a constant positive pressure in the upper airway via a small mask applied to the nose or nose and mouth. By increasing the caliber of the upper airway, CPAP prevents narrowing or collapse of the upper airway during sleep. It thus is very effective for OSA and is effective for primary snoring. However, its use in primary snoring is limited because third-party reimbursement for this use is lacking. Although patients are often willing to use a CPAP device nightly to avoid the significant symptoms and long-term consequences of OSA, they are less willing to use the device to manage primary snoring, whose consequences are primarily social.

Because reduced nasal patency promotes snoring, surgically correcting specific causes of airway compromise (eg, nasal polyps, hypertrophied tonsils, deviated septum) may be a reasonable way to decrease snoring. However, studies have not yet substantiated this theory.

Various pharyngeal surgical procedures that alter the structure of the palate and sometimes the uvula have been developed for obstructive sleep apnea. Some are also useful for nonapneic snoring.

Uvulopalatopharyngoplasty involves remodeling the uvula, palate, and pharyngeal walls to increase the size of the airway. It can be effective for snoring, although effects may not last beyond a few years. It is an inpatient procedure requiring general anesthesia; thus, its usefulness for snoring alone is limited.

Therefore, a number of outpatient palate-altering procedures requiring only a local anesthetic have been developed: