Last full review/revision Jun 2022| Content last modified Jun 2022
Click here for Patient Education
Topic Resources
Abdominal aortic diameter ≥ 3 cm typically constitutes an abdominal aortic aneurysm. The cause is multifactorial, but atherosclerosis is often involved. Most aneurysms grow slowly (~10%/year) without causing symptoms, and most are found incidentally. Risk of rupture is proportional to the size of the aneurysm. Diagnosis is made by ultrasonography or CT scanning. Treatment is surgery or endovascular stent grafting. 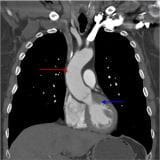 Abdominal aortic aneurysms (AAAs) account for three fourths of aortic aneurysms and affect 0.5 to 3.2% of the population. Prevalence is 3 times greater in men. AAAs typically begin below the renal arteries (infrarenal) but may include renal arterial ostia; about 50% involve the iliac arteries. Generally, aortic diameter ≥ 3 cm constitutes an AAA. Most AAAs are fusiform (circumferential widening of the artery). Many are lined with laminated thrombus.

Etiology of abdominal aortic aneurysms is multifactorial but commonly involves a weakening of the arterial wall, usually by

, weaken the arterial wall and cause infected (mycotic) aneurysms. Staphylococcus aureus is the number one cause of mycotic aneurysms, followed by Salmonella.

Most abdominal aortic aneurysms are asymptomatic. Symptoms and signs, when they do occur, may be nonspecific but usually result from compression of adjacent structures. As AAAs expand, they may cause pain, which is steady, deep, boring, visceral, and felt most prominently in the lumbosacral region. Patients may be aware of an abnormally prominent abdominal pulsation. Although most aneurysms grow slowly without symptoms, rapidly enlarging aneurysms that are about to rupture can be tender.

The aneurysm may or may not be palpable as a pulsatile mass, depending on its size and patient habitus. The probability that a patient with a pulsatile palpable mass has an aneurysm > 3 cm is about 40% (positive predictive value). A systolic bruit may be audible over the aneurysm.

Patients with an occult AAA sometimes present with symptoms of complications or of the cause (eg, fever, malaise, or weight loss due to infection or vasculitis).

The main complications of abdominal aortic aneurysms include

Rupture is most likely to occur on the left posterolateral wall 2 to 4 cm below the renal arteries. If an AAA ruptures, most patients die before reaching a medical facility. Patients who do not die immediately typically present with abdominal or back pain, hypotension, and tachycardia. They may have a history of recent upper abdominal trauma, often minimal, or isometric straining (eg, lifting a heavy object). Even patients who reach the hospital alive have about a 50% mortality.

Most abdominal aortic aneurysms are diagnosed incidentally when they are detected during physical examination or when abdominal ultrasonography, CT, or MRI is done for other reasons. An AAA should be considered in older patients who present with acute abdominal or back pain whether a palpable pulsatile mass is present or not.

When symptoms or physical examination findings suggest AAA, abdominal ultrasonography or abdominal CT is usually the test of choice. Symptomatic patients should have immediate testing to make the diagnosis before catastrophic rupture. For hemodynamically unstable patients with presumed rupture, ultrasonography provides bedside results more rapidly, but intestinal gas and distention may limit its accuracy.

If rupture is not suspected, CT angiography (CTA) or magnetic resonance angiography (MRA) can more precisely characterize aneurysm size and anatomy. If thrombi line the aneurysm wall, conventional angiography may underestimate true size; CT may provide a more accurate estimate. Aortography is sometimes necessary if renal artery or aortoiliac disease is suspected or if correction with endovascular stent grafts (endografts) is being considered.

Plain abdominal x-rays are neither sensitive nor specific; however, if obtained for other purposes, x-rays may show aortic calcification outlining the aneurysm wall.

If a mycotic aneurysm is suspected, bacterial and fungal blood cultures should be done.

Some abdominal aortic aneurysms enlarge at a rate of 10%/year. Enlargement often occurs in a stepwise pattern with periods of no growth observed. Other aneurysms enlarge exponentially, and, for unknown reasons, about 20% remain the same size indefinitely.

Control of atherosclerotic risk factors, especially smoking cessation Smoking Cessation Most smokers want to quit and have tried doing so with limited success. Effective interventions include cessation counseling and drug treatment, such as varenicline, bupropion, or a nicotine... read more and use of antihypertensive drugs Drugs for Hypertension A number of drug classes are effective for initial and subsequent management of hypertension: Adrenergic modifiers Angiotensin-converting enzyme (ACE) inhibitors Angiotensin II receptor blockers... read more as appropriate, is important. If a small or moderate-sized aneurysm becomes > 5.0 to 5.5 cm and if risk of perioperative complications is lower than estimated risk of rupture, AAA repair is indicated. Risk of rupture vs that of perioperative complications should be discussed frankly with the patient.

Patients who present in hemorrhagic shock require fluid resuscitation Fluids Almost all circulatory shock states require large-volume IV fluid replacement, as does severe intravascular volume depletion (eg, due to diarrhea or heatstroke). Intravascular volume deficiency... read more and blood transfusions, but mean arterial pressure should not be elevated to > 70 to 80 mm Hg (permissive hypotension) because bleeding may increase. Preoperative control and avoidance of hypertension is important.

Elective surgical repair is recommended for

Additional indications for elective surgery include

) because some patients with an abdominal aortic aneurysm have significant risk of cardiovascular events. Aggressive medical treatment and risk factor control are essential. Routine preoperative coronary angioplasty or bypass surgery has not been shown to be necessary in most patients who can be prepared with good medical management before aneurysm repair; coronary revascularization should be considered only in patients with unstable coronary artery disease (eg, acute coronary syndrome, including unstable angina) or multiple risk factors for coronary artery disease.

Surgical repair consists of replacing the aneurysmal portion of the abdominal aorta with a synthetic graft. If the iliac arteries are involved, the graft must be extended to include them. If an aorto-bifemoral repair is done, it is important to ensure flow to at least one internal iliac artery (hypogastric artery) to avoid vasculogenic erectile dysfunction and pelvic ischemia. If the aneurysm extends above the renal arteries, the renal arteries must be reimplanted into the graft, or bypass grafts must be created.

Placement of an endovascular stent graft within the aneurysmal lumen via the femoral artery is a less invasive alternative that has been shown to have lower acute morbidity and mortality than open repair. This procedure excludes the aneurysm from systemic blood flow and reduces risk of rupture. The aneurysm eventually thromboses, and 50% of aneurysms decrease in diameter. Short-term results are good, and long-term results are favorable. Complications include angulation, kinking, thrombosis, migration of the stent graft, and endoleak (persistent flow of blood into the aneurysm sac after endovascular stent graft placement). Thus, follow-up visits must be more frequent after endovascular stent graft placement than after a traditional repair. If no complications occur, imaging tests are recommended at 1 month, 6 months, 12 months, and every year thereafter. Complex anatomy (eg, short aneurysm neck below renal arteries, severe arterial tortuosity) makes routine endovascular stent grafting difficult in 30 to 40% of patients; however, devices have been developed to overcome these issues. In general, for a successful endovascular repair, surgeons should choose a specific device that is appropriate for the patient's anatomic characteristics.

In most cases, repair of aneurysms < 5 cm does not appear to increase survival. Because patients vary in size, it is more precise to offer repair when the aneurysm is larger than twice the diameter of an area of normal aorta in that patient. These aneurysms should be monitored with ultrasonography or abdominal CT every 6 to 12 months for expansion that warrants treatment.

Treatment of a mycotic aneurysm consists of vigorous antimicrobial therapy directed at the pathogen, followed by excision of the aneurysm. Early diagnosis and treatment improve outcome.

is the leading cause of early postoperative death, and acute kidney injury Acute Kidney Injury (AKI) Acute kidney injury is a rapid decrease in renal function over days to weeks, causing an accumulation of nitrogenous products in the blood (azotemia) with or without reduction in amount of urine... read more is the leading cause of late postoperative death.