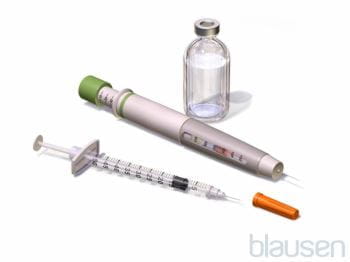 Diabetes Insulin Injection Sites (Back of the Body)

Common Side Effects of Some Oral Antihyperglycemic Drugs

There are two types of diabetes mellitus

General treatment of type 1 diabetes Treatment Diabetes mellitus is a disorder in which the body does not produce enough or respond normally to insulin, causing blood sugar (glucose) levels to be abnormally high. Urination and thirst are... read more requires lifestyle changes, including healthy diet and exercise. People with type 1 diabetes require insulin injections and frequent monitoring of glucose levels.

People with type 1 diabetes almost always require insulin therapy and will become very sick without it. Many people with type 2 diabetes require insulin as well. Usually, insulin is injected under the skin. For certain people, inhaled insulin is also available, although it is not used commonly. Insulin currently cannot be taken by mouth because insulin is destroyed in the stomach. New forms of insulin, such as forms that can be taken by mouth, are being tested.

Insulin is injected under the skin into the fat layer, usually in the arm, thigh, or abdomen. Small syringes with very thin needles make the injections nearly painless.

An insulin pen, which contains a cartridge that holds the insulin, is a convenient way for many people to carry and use insulin, especially for people who take several injections a day outside the home.

Another device is an insulin pump, which pumps insulin continuously from a reservoir through a small cannula (hollow plastic tube) left in the skin. The rate of insulin administration can be adjusted depending on the time of day, whether the person is exercising, or other parameters. People can release additional doses of insulin as needed for meals or to correct high blood glucose levels. The pump more closely mimics the way the body normally produces insulin. Pump therapy is considered in some people who require more than three injections per day. For some people, the pump offers an added degree of control, whereas others find wearing the pump inconvenient or develop sores at the needle site.

A hybrid closed-loop insulin-delivery system is also available. With this system (sometimes called an artificial pancreas), an algorithm is used to calculate and automatically deliver baseline insulin doses through an insulin pump based on input from a continuous glucose monitor. However, this device does not eliminate the need for people to monitor their blood glucose levels and give themselves additional insulin before meals.

Insulin is available in four basic forms, divided by speed of onset and duration of action:

Insulin preparations are stable at room temperature for up to 1 month, allowing them to be carried, brought to work, or taken on a trip. Insulin should not, however, be exposed to extreme temperatures and should be refrigerated if being stored for longer than 1 month.

Choice of insulin type and dose

The choice of insulin is complex. Doctors consider the following factors when deciding which insulin is best and how much insulin to use:

Doctors sometimes have people combine two insulins—a rapid-acting and an intermediate-acting insulin—in one morning dose. A second injection of one insulin or both may be taken at dinner or at bedtime.

Some people take the same amount of insulin every day. Other people, especially people with type 1 diabetes Type 1 diabetes Diabetes mellitus is a disorder in which the body does not produce enough or respond normally to insulin, causing blood sugar (glucose) levels to be abnormally high. Urination and thirst are... read more , need to adjust the insulin dose, especially doses taken around mealtime, depending on their diet, exercise, and blood glucose patterns. In addition, insulin needs may change if people gain or lose weight or experience emotional stress or illness, especially infection.

One adjustable regimen involves injecting a long-acting insulin in the morning or evening along with several additional injections of rapid-acting insulin during the day with meals. Adjustments are made as insulin needs change. Measuring blood glucose levels at various times during the day helps determine the adjustment. This regimen requires people to have a lot of knowledge about diabetes to pay close attention to the details of their treatment.

People who have frequent hypoglycemia may be unaware of hypoglycemic episodes because they no longer experience symptoms (hypoglycemia unawareness).

In very rare cases, the body produces antibodies to injected insulin because injected insulin is not exactly like the insulin the body manufactures. Although this reaction is less common with newer insulin preparations, these antibodies may interfere with insulin’s activity, requiring very large doses.

Insulin injections may cause fat deposits, making the skin look lumpy, or destroy fat, causing indentation of the skin. Although this skin reaction is not an allergic reaction, it can decrease the absorption of injected insulin. It is, therefore, important to rotate the injection sites, for example, using the thigh one day, the stomach another, and an arm the next, to avoid these problems.

Drugs that delay absorption of glucose by the intestine include alpha-glucosidase inhibitors (for example, acarbose and miglitol).

Drugs that increase glucose secretion in the urine include sodium-glucose co-transporter-2 (SGLT2) inhibitors (for example, canagliflozin, dapagliflozin, and empagliflozin).

Dipeptidyl peptidase-4 (DPP 4) inhibitors (for example, sitagliptin, saxagliptin, linagliptin, and alogliptin) both stimulate the pancreas to produce more insulin and delay the absorption of glucose by the intestine. These drugs work by increasing glucagon-like peptide 1 (GLP-1).

People with type 2 diabetes are often prescribed oral antihyperglycemic drugs if diet and exercise fail to lower the levels of glucose in the blood adequately. The drugs are sometimes taken only once a day, in the morning, although some people need two or three doses. More than one type of oral drug, and/or an oral drug plus insulin or an injectable glucagon-like peptide 1 (GLP-1) drug, may be used if one drug is not adequate.

Insulin Insulin Replacement Therapy Many people with diabetes require drugs to lower blood glucose levels, relieve symptoms, and prevent complications of diabetes. There are two types of diabetes mellitus Type 1, in which the... read more

is the most commonly used injectable antihyperglycemic drug. Its use is discussed above.

There are two other types of injectable antihyperglycemic drugs:

Glucagon-like peptide drugs (GLP-1 drugs) work mainly by increasing insulin secretion by the pancreas. These drugs also slow the passage of food out of the stomach (which slows the rise of blood glucose), and reduce appetite and promote weight loss. GLP-1 drugs are given by injection. The most common side effects are nausea and vomiting. These drugs may increase the risk of pancreatitis Overview of Pancreatitis Pancreatitis is inflammation of the pancreas. The pancreas is a leaf-shaped organ about 5 inches (about 13 centimeters) long. It is surrounded by the lower edge of the stomach and the first... read more (a painful inflammation of the pancreas), although the evidence is unclear. They should not be used in people with a personal or family history of medullary thyroid cancer Medullary thyroid cancer The cause of thyroid cancer is not known, but the thyroid gland is very sensitive to radiation, which may cause cancerous changes. Thyroid cancer is more common among people who were treated... read more , because studies in animals showed an increased risk of some types of thyroid tumors. So far, these types of cancers have not been shown to be increased in humans.

Amylin-like drugs mimic the action of amylin, a pancreatic hormone that helps regulate blood glucose levels after eating. Pramlintide is currently the only available amylin-like drug. It suppresses secretion of the hormone glucagon. Because glucagon increases blood glucose, pramlintide thus helps lower blood glucose. It also slows the passage of food out of the stomach and helps people feel full. It is given by injection and is used in combination with mealtime insulin in people with type 1 or type 2 diabetes.

Other Drugs Given to People With Diabetes

Because people with diabetes mellitus are at risk of complications, such as heart attacks and strokes, it is important that people take drugs to prevent or treat these complications. Unless there is a reason people cannot take one of these drugs (for example, an allergy to the drug), they may be given the following:

The following are some English-language resources that may be useful. Please note that THE MANUAL is not responsible for the content of the resources.