Medically Reviewed Jun 2022 | Modified Sep 2022
VIEW PROFESSIONAL VERSION
Aortic branch aneurysms are bulges (dilations) in the wall of the major arteries that come directly off of the aorta. 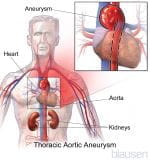 Risk factors for aneurysms include

Infection in tissues near an artery can cause an infected aneurysm (mycotic aneurysm). Autoimmune diseases Autoimmune Disorders An autoimmune disorder is a malfunction of the body's immune system that causes the body to attack its own tissues. What triggers an autoimmune disorder is not known. Symptoms vary depending... read more can cause inflammation in different arteries, leading to weakening of the arterial wall, and formation of aneurysms (inflammatory aneurysm).

Aneurysms in the subclavian artery (located in the upper part of the chest under the collarbone) sometimes occur in people with an extra rib located in the neck area (cervical rib) or thoracic outlet syndrome Thoracic Outlet Syndromes (TOS) Thoracic outlet syndromes are a group of disorders caused by pressure on nerves, arteries, or large veins as they pass between the neck and chest. When pressure is put on the nerves, pain and... read more 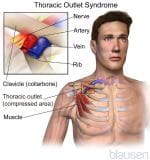 Aneurysms in the arteries of the abdominal organs

Aneurysms in the arteries that deliver blood to the digestive tract (splanchnic arteries) are uncommon. However, aneurysms may occur in arteries that supply blood to other organs, including the

Splenic artery aneurysms occur in more women than men. Causes include abnormal growth of muscle in the artery's wall (fibromuscular dysplasia Fibromuscular Dysplasia Fibromuscular dysplasia is abnormal thickening of the walls of arteries that is not related to atherosclerosis or inflammation but that causes artery narrowing or blockage. Fibromuscular dysplasia... read more ), high blood pressure in the blood vessels connected to the liver (portal hypertension Portal Hypertension Portal hypertension is abnormally high blood pressure in the portal vein (the large vein that brings blood from the intestine to the liver) and its branches. Cirrhosis (scarring that distorts... read more ), multiple pregnancies (such as with twins or triplets), penetrating abdominal injury (stab wound) or blunt abdominal trauma (such as from a motor vehicle crash), inflammation of the pancreas Overview of Pancreatitis Pancreatitis is inflammation of the pancreas. The pancreas is a leaf-shaped organ about 5 inches (about 13 centimeters) long. It is surrounded by the lower edge of the stomach and the first... read more (pancreatitis), and infection.

Hepatic artery aneurysms occur in more men than women. They may result from previous abdominal injury, use of illicit intravenous drug (such as heroin), damage to the wall of the artery, or inflammation of tissues around the artery.

Superior mesenteric artery aneurysms are relatively uncommon among aneurysms in the arteries that go to the abdominal organs. They may result from infections, atherosclerosis, and other disorders that weaken the arterial wall.

Renal artery aneurysms may dissect Aortic Dissection An aortic dissection is an often fatal disorder in which the inner layer (lining) of the aortic wall tears and separates from the middle layer of the aortic wall. Most aortic dissections occur... read more (the layers of the artery separate) or rupture, causing sudden blockage (occlusion) of blood flow to the kidneys and kidney failure.

Symptoms of aortic branch aneurysms vary depending on the organ that is deprived of blood. Regardless of location, infected or inflammatory aneurysms may cause pain in the area near the affected artery and symptoms of infection such as fever, weight loss, and a general feeling of illness. Furthermore, rupture of any type of aneurysm can cause rapid blood loss, pain at the site of the aneurysm, low blood pressure, and even death.

Subclavian aneurysms can cause shoulder or arm pain, a pulsating sensation, blood clots or swelling in nearby veins (due to pressure on the veins), transient ischemic attacks Transient Ischemic Attacks (TIAs) A transient ischemic attack (TIA) is a disturbance in brain function that typically lasts less than 1 hour and results from a temporary blockage of the brain’s blood supply. The cause and symptoms... read more , stroke Overview of Stroke A stroke occurs when an artery to the brain becomes blocked or ruptures, resulting in death of an area of brain tissue due to loss of its blood supply (cerebral infarction) and symptoms that... read more , or hoarseness (due to compression of the recurrent laryngeal nerve), or impaired nerve function (due to compression of the recurrent laryngeal nerve or brachial plexus).

Most aneurysms in the abdominal aortic branches do not cause any symptoms unless they rupture.

Rarely, people with splenic artery aneurysms will have abdominal pain, nausea, and vomiting.

People with hepatic artery aneurysms will have abdominal pain or yellowing of the skin (jaundice) if the aneurysm compresses the tubes that transport bile from the gallbladder to the intestine (the biliary tract). 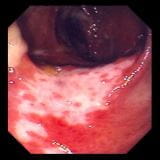 People with renal artery aneurysms will have high blood pressure, abdominal or flank pain, or blood in the urine.

Sometimes aneurysms that are not causing symptoms are discovered when an x-ray or another imaging test is done for another reason. However, most aortic branch aneurysms are not diagnosed before they rupture.

is typically used to detect or confirm aortic branch aneurysms. Angiography Angiography In angiography, x-rays are used to produce detailed images of blood vessels. It is sometimes called conventional angiography to distinguish it from computed tomography (CT) angiography and magnetic... read more can also be used when a person has symptoms that may be caused by an aneurysm.

Treatment is surgical repair of the aneurysm in which an artificial artery made of synthetic material (graft) is placed inside the aneurysm. The old arterial wall (aneurysm) is wrapped around the new graft.

Surgery for subclavian artery aneurysms may involve removal of a cervical rib (if present) from the upper chest before repair and replacement.

Treatment of infected (mycotic) aneurysms is antibiotic therapy appropriate for the specific infectious organism. Generally, these aneurysms must also be surgically repaired once the infection has been treated.