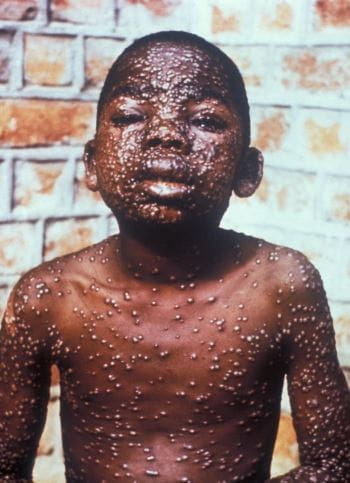 The smallpox virus can exist only in people—not in animals.

There are two main forms:

Throughout history, smallpox has killed millions of people. Over 200 years ago, a vaccine against smallpox Smallpox Vaccine In the United States, routine vaccination with the smallpox vaccine was stopped in 1972 because smallpox had been eliminated in the United States. The last known case in the world occurred in... read more (the first vaccine ever) was developed. The vaccine proved very effective and was given to people throughout the world. The last case of smallpox was reported in 1977. In 1980, the World Health Organization (WHO) declared the disease eliminated and recommended stopping vaccination.

Samples of the virus are kept in two high-security laboratories (one in the United States and one in Russia).

Because the vaccine’s protective effects gradually wear off, nearly all people—even those previously vaccinated—are believed to be susceptible to smallpox to various degrees. This lack of protection is a concern only because samples of the virus have been stored, and some people worry that terrorist groups Biological Weapons Biological warfare is the use of microbiological agents as weapons. Such use is contrary to international law and has rarely taken place during formal warfare in modern history, despite the... read more could obtain the virus and release it into the population. The resulting epidemic would be devastating.

The smallpox virus spreads directly from person to person and is acquired by breathing air contaminated with droplets of moisture breathed or coughed out by an infected person. Contact with clothing or bed linens used by an infected person can also spread the disease. Smallpox usually spreads to people who have close personal contact with an infected person. Rarely, smallpox spreads through the air in an closed environment, such as a building, where someone has smallpox. A large outbreak in a school or workplace would be uncommon.

The virus survives no more than 2 days in the environment— less if temperature and humidity are high.

Symptoms of the severe form usually begin 7 to 17 days after infection. Infected people develop fever, headache, and backache and feel extremely ill. They may have severe abdominal pain and become delirious.

After 2 or 3 days, a rash of flat, red spots develops in the mouth and on the face. Shortly thereafter, it spreads to the trunk and legs, then the hands and feet. People are contagious only after the rash has started and are most contagious for the first 7 to 10 days after the rash appears. After 1 or 2 days, the spots turn into blisters, which fill with pus (forming pustules). After 8 or 9 days, the pustules become crusted.

The lungs, brain, and/or bone may become infected.

About 30% of people with smallpox die, usually in the second week of the disease. Some of the survivors are left with large, disfiguring scars.

In the less severe form, symptoms are similar but much less severe. The rash is much less extensive, and fewer than 1% of people die.

A doctor suspects smallpox when people have the disease’s characteristic spots—particularly when there is an outbreak of the disease.

The diagnosis of smallpox can be confirmed by identifying the smallpox virus in a sample that is taken from the blisters or pustules and is tested for the genetic material (DNA) of smallpox.

A sample can also be examined under a microscope or sent to a laboratory for the virus to be grown (cultured) and analyzed.

Prevention is the best response to the threat of smallpox. Prevention involves

The smallpox vaccine Smallpox Vaccine In the United States, routine vaccination with the smallpox vaccine was stopped in 1972 because smallpox had been eliminated in the United States. The last known case in the world occurred in... read more is not made from the smallpox virus. Instead, the vaccine contains live vaccinia virus, which is related to the viruses that cause monkeypox Monkeypox Monkeypox is caused by the monkeypox virus, which is related to the smallpox virus and causes a similar, but usually milder illness. (See also Overview of Viral Infections.) Where monkeypox... read more

and smallpox. There are 2 smallpox vaccines licensed in the United States:

ACAM2000 vaccine is given with a special type of needle dipped in reconstituted vaccine. The needle is rapidly jabbed 15 times in an area about 5 mm in diameter and with sufficient force to draw a trace of blood. If vaccination is successful, a blister develops at the vaccination site within about 7 days. The vaccine site is covered with a dressing to prevent spread of the vaccine virus to other body sites or to close contacts. Fever, muscle aches, and a general ill feeling are common the week after vaccination. Vaccination with ACAM2000 can be helpful up to 7 days after exposure to smallpox, but it is more effective the sooner it is given.

ACAM2000 is a live virus, and so it dangerous for some people, especially those with a weakened immune system (such as those who have AIDS or who take drugs that suppress the immune system Overview of the Immune System The immune system is designed to defend the body against foreign or dangerous invaders. Such invaders include Microorganisms (commonly called germs, such as bacteria, viruses, and fungi) Parasites... read more ). Rarely, even some healthy people have adverse reactions to this smallpox vaccination. Adverse reactions are less common among previously vaccinated people than among those who have never received the vaccine:

If people have a very severe reaction to the vaccine, doctors may try giving antiviral drugs such as tecovirimat, cidofovir, or brincidofovir.

JYNNEOS is administered as 2 injections 4 weeks apart. It is approved for people 18 years of age and older and may have a particular role in vaccinating people for whom ACAM2000 may be dangerous, such as those with a weak immune system or atopic dermatitis Atopic Dermatitis (Eczema) Atopic dermatitis (commonly referred to as eczema) is chronic, itchy inflammation of the upper layers of the skin that often develops in people who have hay fever or asthma and in people who... read more

Vaccination for smallpox is recommended only for people at high risk of exposure, mainly certain military personnel and laboratory technicians and health care workers who give or handle the vaccine and related materials.

People with symptoms suggesting smallpox need to be isolated to prevent spread of the infection. Contacts of these people need not be isolated because they cannot spread the infection unless they become sick and develop a rash. However, contacts are watched closely and isolated at the first sign of infection.

Treatment of smallpox is supportive. It includes fluids, symptom relief, assistance with breathing (for example, with a face mask to supply oxygen), and treatments to maintain blood pressure.

Antiviral drugs have not been tested in smallpox because they did not exist when the disease was present. However, if smallpox were to return, doctors think that tecovirimat, cidofovir, or brincidofovir might be helpful.