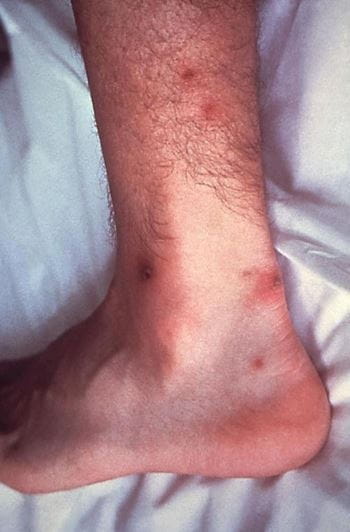 Disseminated Gonococcal Infection Affecting the Skin
Gonorrhea is a sexually transmitted disease caused by the bacteria Neisseria gonorrhoeae, which infect the lining of the urethra, cervix, rectum, and throat or the membranes that cover the front part of the eye (conjunctiva and cornea).

Gonorrhea is a very common infectious disease. The Centers for Disease Control and Prevention (CDC) estimates that about 1.14 million new infections occur in the United States each year. In 2018, 583,405 cases of gonorrhea were reported to the CDC.

. However, in most developed countries, infection is prevented because all newborns are routinely treated after delivery with medicated eye ointment.

, syphilis Syphilis Syphilis is a sexually transmitted disease caused by the bacteria Treponema pallidum. Syphilis can occur in three stages of symptoms, separated by periods of apparent good health. It begins... read more

Usually, gonorrhea causes symptoms only at the sites of initial infection. In a few people, infection spreads through the bloodstream to other parts of the body, especially to the skin, joints, or both.

Some men (about 25%) have minimal symptoms. Symptoms begin within about 2 to 14 days after infection. Men feel mild discomfort in the urethra (the tube that carries urine from the bladder out of the body). This discomfort is followed a few hours later by mild to severe pain during urination, a yellow-green discharge of pus from the penis, and a frequent urge to urinate. The opening at the tip of the penis may become red and swollen. The bacteria sometimes spread to the epididymis (the coiled tube on top of each testis), causing the scrotum to swell and feel tender to the touch.

Some women (about 10 to 20%) have minimal or no symptoms. Thus, gonorrhea may be detected only during routine screening or after diagnosis of the infection in their male partner. Symptoms typically do not begin until at least 10 days after infection. Some women feel only mild discomfort in the genital area and have a puslike discharge from the vagina. However, other women have more severe symptoms, such as a frequent urge to urinate and pain during urination. These symptoms develop when the urethra is also infected.

, which may cause severe pain in the lower abdomen. Women who have had pelvic inflammatory disease have an increased risk of infertility Overview of Infertility Infertility is usually defined as the inability of a couple to achieve a pregnancy after repeated intercourse without contraception for 1 year. Frequent intercourse without birth control usually... read more

Occasionally, infection in the abdomen concentrates around the liver. This infection, called perihepatitis or Fitz-Hugh-Curtis syndrome, causes pain in the upper right part of the abdomen. It occurs mainly in women.

Oral sex with an infected partner may result in gonorrhea of the throat (gonococcal pharyngitis). Usually, these infections cause no symptoms, but the throat may be sore.

If infected fluids come into contact with the eyes, gonococcal conjunctivitis may develop, causing swelling of the eyelids and a discharge of pus from the eyes. In adults, often only one eye is infected. Newborns usually have infection in both eyes. Blindness may result if the infection is not treated early.

In children, gonorrhea usually results from sexual abuse. In girls, the genital area (vulva) may be irritated, red, and swollen, and they may have a discharge from the vagina. If the urethra is infected, children, mainly boys, may have pain during urination.

Rarely, disseminated gonococcal infection (arthritis-dermatitis syndrome) develops. It occurs when the infection spreads through the bloodstream to other parts of the body, especially the skin and joints. Joints become swollen, tender, and extremely painful, limiting movement. The skin over infected joints may be red and warm. People typically have a fever, feel generally ill, and develop arthritis in one or more joints. Small, red spots may appear on the skin, usually on the arms and legs. The spots are slightly painful and may be filled with pus. Joint, bloodstream, and heart infections can be treated, but recovery from arthritis may be slow.

Gonococcal septic arthritis is a form of disseminated gonococcal infection that causes painful arthritis. Usually, it affects one or two large joints, such as the knees, ankles, wrists, or elbows, Symptoms often begin suddenly. People usually have a fever. Infected joints are painful and swollen, and movement is limited. The skin over the infected joints may be warm and red.

In more than 95% of infected men with a discharge, gonorrhea may be diagnosed within an hour by identifying the bacteria (gonococci) in samples of the discharge examined under a microscope. If a discharge is obvious, doctors touch a swab or slide to the end of the penis to collect the sample. If there is no obvious discharge, doctors insert a small swab a half inch or more into the urethra to collect a sample. Men are asked to refrain from urinating for at least 2 hours before the sample is collected.

Identifying bacteria in a sample of discharge from the cervix is more difficult. The bacteria can be seen in only about half of infected women.

The sample (from the urethra or cervix) is also sent to a laboratory for culture (to grow the organisms) and for other tests. Such tests are very reliable in both sexes but take longer than a microscopic examination. If a doctor suspects an infection of the throat, rectum, or bloodstream, samples from these areas are sent for testing in a laboratory.

Highly sensitive tests can be done to detect the DNA of gonococci and of chlamydiae (which are often also present). Laboratories can test for both infections in a single sample. For some of these tests (called nucleic acid amplification tests, or NAATS), techniques that increase the amount of the bacteria's genetic material are used. Because these techniques make the organisms easier to detect, urine samples can be used. Thus, these tests are convenient for screening men and women who have no symptoms or who are unwilling to have samples of fluid taken from their genitals.

Because many people have more than one STD, doctors may test samples of blood and genital fluids for other STDs, such as syphilis Syphilis Syphilis is a sexually transmitted disease caused by the bacteria Treponema pallidum. Syphilis can occur in three stages of symptoms, separated by periods of apparent good health. It begins... read more

If a joint is red and swollen, doctors draw fluid from the joint using a needle. The fluid is sent for culture and other tests.

Certain people who have no symptoms are screened for gonorrhea because they have characteristics that increase their risk of this infection.

For example, women who are not pregnant are screened if they

Pregnant women are screened at their first prenatal visit and, if they have risk factors for infection, again during the 3rd trimester.

Heterosexual men are not routinely screened unless they are considered at high risk of infection—for example, when they have several sex partners, are patients at an adolescent or STD clinic, or are admitted into a correctional facility.

, multiple sex partners, or whose partner has multiple partners are screened more frequently.

The following general measures can help prevent gonorrhea (and other STDs):

If gonorrhea has spread through the bloodstream, people are usually treated in the hospital and given antibiotics intravenously or by injection into a muscle.

People with gonorrhea should abstain from sexual activity until treatment is completed to avoid infecting sex partners.

All sex partners who have had sexual contact with infected people in the past 60 days should be tested for gonorrhea and other STDs and, if the tests are positive, should be treated. If sex partners were exposed to gonorrhea within the past 2 weeks, they are treated for it without waiting for test results.

Expedited partner therapy is an option doctors sometimes use to make it easier for sex partners to be treated. This approach involves giving people with gonorrhea a prescription or drugs to give to their partner. Thus, the sex partner does not need to see a doctor before being treated. Seeing a doctor is better because then the doctor can check for drug allergies and the presence of other STDs. However, if the partner is unlikely to see a doctor, expedited partner therapy is useful.