Full review/revision Apr 2022 | Modified Sep 2022
VIEW PROFESSIONAL VERSION
GET THE QUICK FACTS
Topic Resources
In endometriosis, patches of endometrial tissue—normally occurring only in the lining of the uterus (endometrium)—appear outside the uterus.

Endometriosis is a chronic disorder that may be painful. Exactly how many women have endometriosis is unknown because it can usually be diagnosed only by directly viewing the endometrial tissue (which requires a surgical procedure, typically laparoscopy Diagnosis 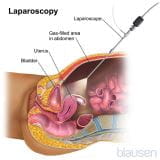 ). About 6 to 10% of all women are diagnosed with endometriosis. The percentage of women who have endometriosis is higher among women who are infertile (25 to 50%) and women who have chronic pelvic pain Pelvic Pain in Women Pelvic pain is discomfort that occurs in the lowest part of the abdomen. Pain that occurs externally in the genital area (vulva, or labia) is called vulvar pain. Many women have pelvic pain... read more (75 to 80%). The average age at diagnosis is 27, but endometriosis can develop in adolescents.

Less common locations include the fallopian tubes, the outer surface of the small and large intestines, the ureters (tubes leading from the kidneys to the bladder), the bladder, and the vagina. Rarely, endometrial tissue grows on the membranes covering the lungs (pleura), the sac that envelops the heart (pericardium), the vulva, the cervix, or surgical scars in the abdomen.

The misplaced endometrial tissue responds to hormones as normal endometrial tissue does. Thus, it can bleed and cause pain, particularly before and during menstrual periods. The severity of symptoms and the disorder's effects on fertility and on organ function vary greatly from woman to woman.

As the disorder progresses, the misplaced endometrial tissue tends to gradually increase in size. It may also spread to new locations. However, how much tissue is present and how quickly endometriosis progresses vary greatly. The tissue may remain on the surface of structures or may penetrate deeply (invade) and form nodules.

The cause of endometriosis is unclear, but there are several theories:

Endometriosis sometimes runs in families and is more common among first-degree relatives —mothers, sisters , and children—of women with endometriosis. It is more likely to occur in women with the following characteristics:

Endometriosis seems to occur less often in women with the following characteristics:

The main symptom of endometriosis is

The pain usually varies during the menstrual cycle Menstrual Cycle Menstruation is the shedding of the lining of the uterus (endometrium) accompanied by bleeding. It occurs in approximately monthly cycles throughout a woman's reproductive life, except during... read more , worsening before and during menstrual periods. Menstrual irregularities, such as heavy menstrual bleeding and spotting before menstrual periods, may occur. Misplaced endometrial tissue responds to the same hormones—estrogen and progesterone (produced by the ovaries)—as normal endometrial tissue in the uterus. Consequently, the misplaced tissue may bleed during menstruation and cause inflammation. The misplaced tissue often causes cramps and pain.

The severity of endometriosis symptoms does not depend on the amount of misplaced endometrial tissue. Some women with a large amount of tissue have no symptoms. Others, even some with a small amount, have incapacitating pain. In many women, endometriosis does not cause pain until it has been present for several years. For some women, sexual intercourse tends to be painful before or during menstruation.

Symptoms also vary depending on where the endometrial tissue is located. Possible symptoms by location include

A doctor may suspect endometriosis in a woman who has typical symptoms or unexplained infertility. Occasionally, during a pelvic examination, a woman may feel pain or tenderness, or a doctor may feel a lump or mass of tissue behind the uterus or near the ovaries.

Laparoscopy is done in a hospital and usually requires a general anesthetic. An overnight stay in the hospital is usually not required. Laparoscopy causes mild to moderate abdominal discomfort, but normal activities can usually be resumed in a few days.

If a doctor sees abnormal tissue during laparoscopy and is not sure whether it is endometrial tissue, a biopsy must be done. A sample of the tissue is removed, using instruments inserted through the laparoscope. The sample is then examined using a microscope. An overnight stay in the hospital is usually required only if a very large amount of abnormal tissue is removed.

Depending on the location of the misplaced tissue, a biopsy may be done when the vagina is inspected during a pelvic examination or when a flexible viewing tube is inserted through the anus to examine the lower part of the large intestine, rectum, and anus (sigmoidoscopy Endoscopy Endoscopy is an examination of internal structures using a flexible viewing tube (endoscope). Endoscopy can also be used to treat many disorders because doctors are able to pass instruments... read more ) or bladder (cystoscopy Cystoscopy A doctor can diagnose some disorders of the bladder and urethra (for example, bladder tumors, stones in the bladder, benign prostatic enlargement) by looking through a flexible viewing tube... read more ). Occasionally, a larger incision in the abdomen (called laparotomy) is required.

Doctors may use the following to estimate what the chances of becoming pregnant are for a woman with endometriosis:

Endometriosis treatment depends on a woman's symptoms, pregnancy plans, and age, as well as the stage of endometriosis.

Usually, nonsteroidal anti-inflammatory drugs (NSAIDs Nonsteroidal Anti-Inflammatory Drugs Pain relievers (analgesics) are the main drugs used to treat pain. Doctors choose a pain reliever based on the type and duration of pain and on the drug's likely benefits and risks. Most pain... read more ) are used to relieve pain. They may be all that is needed if symptoms are mild and women do not plan to become pregnant.

Drugs can be used to suppress the activity of the ovaries and thus slow the growth of the misplaced endometrial tissue and reduce bleeding and pain. The following drugs are commonly used:

However, these drugs may not eliminate endometriosis, and even if they do, endometriosis often recurs after the drugs are stopped unless more radical treatment is used to completely and permanently stop the ovaries from functioning.

Combination oral contraceptives are used primarily in women who do not plan to become pregnant soon. Oral contraceptives may also be used after treatment with danazol or a GnRH agonist to try to slow progression of the disorder and to reduce pain. The oral contraceptives can be taken continuously, especially if pain is worse during menstrual periods.

GnRH agonists turn off the brain's signal to the ovaries to produce estrogen and progesterone. As a result, production of these hormones decreases. Side effects of GnRH agonists include hot flashes, stiff joints, mood changes, and vaginal dryness. Continued use of GnRH agonists for more than 4 to 6 months causes a decrease in bone density and may lead to osteoporosis. To minimize the decrease in bone density, doctors may give women small doses of a progestin or a bisphosphonate (such as alendronate, ibandronate, or risedronate). If endometriosis recurs, women may need to be treated again.

Relugolix (another GnRH antagonist) combined with estradiol and norethindrone is being studied as a treatment for endometriosis. This combination minimizes hot flushes and bone loss, but if it is taken for more than 24 months, bone loss may continue and may be irreversible.

Danazol inhibits release of an egg (ovulation). However, it has side effects including weight gain and the development of masculine characteristics (such as increased body hair, loss of hair from the head, reduced breast size, and lowering of the voice). These side effects limit its use.

For most women with moderate to severe endometriosis, the most effective treatment is removing or destroying misplaced endometrial tissue and endometriomas. Usually, these surgical procedures are done through a laparoscope inserted into the abdomen through a small incision made near the navel. Such treatment may be needed in the following situations:

Endometriomas (ovarian cysts caused by endometriosis) are usually removed because they are less likely to recur if they are removed than if they are drained.

During surgery, doctors remove as much misplaced endometrial tissue as possible without damaging the ovaries. Thus, the woman's ability to have children may be preserved. Depending on the stage of the endometriosis, 40 to 70% of women who have surgery may become pregnant. If doctors cannot remove all of the tissue, women may be treated with a GnRH agonist. But whether this drug increases their chances of becoming pregnant is unclear. Some women who have endometriosis can become pregnant by using assisted reproductive techniques, such as in vitro fertilization In vitro (test tube) fertilization (IVF) Assisted reproductive technologies involve working with sperm and eggs or embryos in a laboratory (in vitro) with the goal of producing a pregnancy. (See also Overview of Infertility.) If treatment... read more

Surgical removal of misplaced endometrial tissue is only a temporary measure. After the tissue is removed, endometriosis recurs in most women unless they take drugs to suppress the ovaries or the ovaries are removed.

Removal of the uterus but not the ovaries (hysterectomy without salpingo-oophorectomy) is often appropriate in women who do not plan to become pregnant, particularly when drugs do not relieve abdominal or pelvic pain.

Sometimes both ovaries must be removed, as well as the uterus. This procedure is called hysterectomy plus bilateral salpingo-oophorectomy. It has the same effects as menopause because it, like menopause Menopause Menopause is the permanent end of menstrual periods and thus of fertility. For up to several years before and just after menopause, estrogen levels fluctuate widely, periods become irregular... read more

, results in decreased estrogen levels. Thus, women under 50 may be given estrogen to reduce the severity of the menopausal symptoms that occur after this surgery. Most of these women are also given a progestin. The progestin is included to help prevent any remaining misplaced endometrial tissue from growing. A progestin alone can be given to women over 50 to reduce symptoms that persist after the ovaries are removed.

Hysterectomy plus bilateral salpingo-oophorectomy may be done, for example, in the following situations: