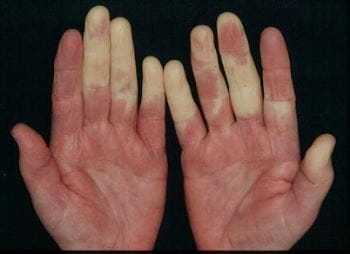 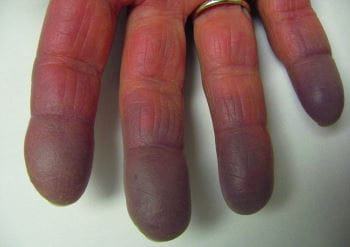 Mixed connective tissue disease (MCTD) occurs worldwide and in all races, with a peak incidence in adolescence and the 20s. About 80% of people who have this disease are women. The cause of MCTD is unknown. In many patients, the disorder evolves into classic systemic sclerosis Systemic Sclerosis Systemic sclerosis is a rare chronic disease of unknown cause characterized by diffuse fibrosis and vascular abnormalities in the skin, joints, and internal organs (especially the esophagus... read more

Symptoms and Signs of MCTD

(Raynaud phenomenon) may precede other manifestations by years. Frequently, the first manifestations resemble early SLE, systemic sclerosis, polymyositis, or even rheumatoid arthritis. Many patients appear to have an undifferentiated connective tissue disease initially. The disease manifestations may progress and become widespread, and the clinical pattern changes over time.

Initial, diffuse swelling of the hands is typical but not universal. Skin findings include lupus or dermatomyositis-like rashes. Diffuse systemic sclerosis–like skin changes and ischemic necrosis or ulceration of the fingertips may develop.

Almost all patients have polyarthralgias, and 75% have frank arthritis. Often the arthritis is nondeforming, but erosive changes and deformities similar to those in rheumatoid arthritis (eg, boutonnière and swan-neck deformities) may be present. Proximal muscle weakness with or without tenderness is common, typically among people who have elevated levels of muscle enzymes (eg, creatinine kinase).

Renal involvement (most commonly membranous nephropathy) occurs in about 25% of patients and is typically mild; severe involvement, with morbidity or mortality, is atypical for MCTD. The lungs are affected in up to 75% of patients with MCTD. Interstitial lung disease is the most common lung manifestation; pulmonary hypertension is a major cause of death. Heart failure can occur. Sjögren syndrome may develop.

MCTD should be suspected when additional overlapping features are present in patients appearing to have SLE Diagnosis Systemic lupus erythematosus is a chronic, multisystem, inflammatory disorder of autoimmune etiology, occurring predominantly in young women. Common manifestations may include arthralgias and... read more

Tests for ANA and antibody to U1 RNP antigen are done first. Almost all patients have high titers of fluorescent ANA that produce a speckled pattern. Antibodies to U1 RNP are present, usually at very high titers. Antibodies to the ribonuclease-resistant Sm component of extractable nuclear antigen (anti-Sm antibodies) and to double-stranded DNA (negative in MCTD by definition) are measured to exclude other disorders. The presence of anti-RNP antibodies is not sufficient to make the diagnosis of MCTD; typical clinical findings are also required.

Rheumatoid factors are frequently present, and titers may be high. The erythrocyte sedimentation rate is frequently elevated.

Creatinine kinase, MRI, electromyogram, or muscle biopsy can help diagnose autoimmune myositis Diagnosis Autoimmune myositis is characterized by inflammatory and degenerative changes in the muscles (polymyositis) or in the skin and muscles (dermatomyositis). Manifestations include symmetric weakness... read more

The overall 10-year survival rate is about 80%, but prognosis depends largely on which manifestations predominate. Patients with features of systemic sclerosis and polymyositis have a worse prognosis. Patients are at increased risk of atherosclerosis. Causes of death include pulmonary hypertension, renal failure, myocardial infarction, colonic perforation, disseminated infection, and cerebral hemorrhage. Some patients have sustained remissions for many years without treatment.

General management and initial drug therapy are tailored to the specific clinical problem and are similar to those of SLE Treatment Systemic lupus erythematosus is a chronic, multisystem, inflammatory disorder of autoimmune etiology, occurring predominantly in young women. Common manifestations may include arthralgias and... read more

Patients with Raynaud syndrome should be treated based on their symptoms and as tolerated by their blood pressure with calcium channel blockers (eg, nifedipine) and phosphodiesterase inhibitors (eg, tadalafil).

All patients should be closely monitored for atherosclerosis Diagnosis Atherosclerosis is characterized by patchy intimal plaques (atheromas) that encroach on the lumen of medium-sized and large arteries; the plaques contain lipids, inflammatory cells, smooth muscle... read more

), should be added if combination immunosuppressive therapy is used.

Some experts encourage screening for pulmonary hypertension on a periodic basis with pulmonary function testing and/or echocardiography every 1 to 2 years, depending on symptoms.

Overview of Sprains and Other Soft-Tissue Injuries
Test your knowledge