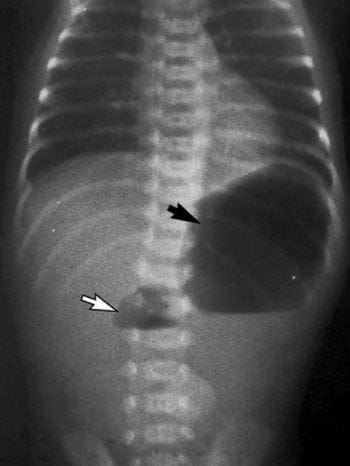 Double-Bubble Effect
The duodenum can be obstructed by atresia, stenosis, and pressure due to an extrinsic mass.

This anomaly is the 2nd most common atresia of the gastrointestinal (GI) tract. The estimated incidence is 1 in 5,000 to 10,000 live births. Duodenal atresia is due to the failure of canalization of the embryonic duodenum. This failure may be related to an ischemic event or genetic factors.

Duodenal atresia, unlike other intestinal atresias, is commonly associated with other congenital anomalies such as Down syndrome Down Syndrome (Trisomy 21) Down syndrome is an anomaly of chromosome 21 that can cause intellectual disability, microcephaly, short stature, and characteristic facies. Diagnosis is suggested by physical anomalies and... read more

, annular pancreas Choledochal cyst The duodenum can be obstructed by atresia, stenosis, and pressure due to an extrinsic mass. (See also Overview of Congenital Gastrointestinal Anomalies.) This anomaly is the 2nd most common... read more

, biliary tract abnormalities, and mandibulofacial anomalies Overview of Congenital Craniofacial Abnormalities Congenital craniofacial abnormalities are a group of defects caused by abnormal growth and/or development of the head and facial soft-tissue structures and/or bones. (See also Introduction to... read more .

Diagnosis of duodenal atresia can be suspected prenatally if there is polyhydramnios and/or dilated bowel. Prenatal ultrasonography can detect a double bubble in about 50% of cases.

Postnatally, infants with duodenal atresia present with polyhydramnios, feeding difficulties, and emesis that may be bilious. The diagnosis is suspected by symptoms and classic double-bubble x-ray findings—one bubble is in the stomach and the other is in the proximal duodenum; little to no air is in the distal gut. Although an upper GI series provides definitive diagnosis, it must be done carefully by a radiologist experienced with doing this procedure on children to avoid aspiration and is not typically necessary if surgery is to be done immediately. If surgery is to be delayed (eg, because other medical issues, such as respiratory distress syndrome, need to be stabilized), a contrast enema should be done to confirm that the double-bubble sign is not due to malrotation. Once the disorder is suspected, infants should receive nothing by mouth, and a nasogastric tube should be placed to decompress the stomach.

Surgery is the definitive therapy.

This anomaly occurs less commonly than duodenal atresia but manifests in a similar fashion and requires surgery. It too is frequently associated with Down syndrome.

A choledochal cyst may obstruct the duodenum by extrinsic pressure. The incidence in Europe and the US is about 1 in 100,000 live births. Over half of reported cases occur in Japan. There is some evidence that the incidence of choledochal cysts is increasing.

Infants with choledochal cyst classically present with a triad of abdominal pain (a very difficult finding to infer in the neonate), right upper quadrant mass, and jaundice. If the cyst is large, it may also manifest with variable degrees of duodenal obstruction. Neonates can present with cholestasis.

Treatment of choledochal cyst is surgical and requires complete excision of the cyst because of the high risk (20 to 30%) of developing cancer in the cyst remnants. The surgical procedure most commonly used is a Roux-en-Y hepaticojejunostomy. This procedure is typically done laparoscopically. Some recent studies have noted that the outcome may be enhanced with robotic-assisted surgery.

Annular pancreas is a rare congenital anomaly (5 to 15 per 100,000 live births), often associated with Down syndrome, in which pancreatic tissue encircles the 2nd portion of the duodenum, causing duodenal obstruction.

About two thirds of affected people remain asymptomatic. Of those who do develop symptoms, most present in the neonatal period, but manifestation may be delayed until adulthood. Neonates present with polyhydramnios, feeding problems, and emesis that may be bilious.

The diagnosis of annular pancreas can be suggested by an x-ray of the abdomen showing the same double-bubble sign seen in duodenal atresia. The diagnosis can also be made by an upper GI series and is more definitively made with CT or magnetic resonance cholangiopancreatography. ERCP can be done in older children.

Diverticular Disease of the Stomach and Small Bowel