, MD, The Children's Hospital of Philadelphia

Growth hormone (GH) deficiency can occur in isolation or in association with generalized hypopituitarism. In both instances, growth hormone deficiency may be acquired or congenital (including hereditary genetic causes). Rarely, GH is not deficient, but the GH receptors are abnormal (GH insensitivity).

Isolated growth hormone deficiency is estimated to occur in 1/4,000 to 1/10,000 children. It is usually idiopathic, but about 25% of patients have an identifiable etiology. Congenital causes include abnormalities of the GH-releasing hormone receptor and of the GH1 gene and certain central nervous system (CNS) malformations. Acquired causes include therapeutic radiation of the CNS (high-dose radiation can cause generalized hypopituitarism), meningitis Overview of Meningitis Meningitis is inflammation of the meninges and subarachnoid space. It may result from infections, other disorders, or reactions to drugs. Severity and acuity vary. Findings typically include... read more , histiocytosis Overview of Histiocytic Disorders The histiocytic disorders are clinically heterogeneous disorders that result from an abnormal proliferation of histiocytes that are either Dendritic cells (antigen-presenting cells) Monocyte-macrophages... read more , and brain injury. Radiation of the spine, either prophylactic or therapeutic, may further impair the growth potential of the vertebrae and further jeopardize height gain.

Generalized hypopituitarism may have genetic causes, involving hereditary or sporadic mutations that affect cells of the pituitary. In such cases, there also may be anomalies of other organ systems, particularly midline defects, such as cleft palate Cleft Lip and Cleft Palate An oral-facial cleft is a birth defect in which the lip, the roof of the mouth, or both do not close in the midline and remain open, creating a cleft lip and/or cleft palate. These defects are... read more 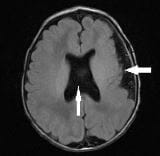 (which involves absence of the septum pellucidum, optic nerve atrophy, and hypopituitarism). Generalized hypopituitarism also can be acquired from many types of lesions that affect the hypothalamus (impairing secretion of releasing hormones) or pituitary; examples include tumors Pituitary Tumors Most pituitary tumors are adenomas. Symptoms include headache and endocrinopathies; endocrinopathies result when the tumor produces hormones or destroys hormone-producing tissue. Diagnosis is... read more

Growth hormone deficiency itself typically manifests as growth failure, sometimes along with delay in tooth development. Height is below the 3rd percentile, and growth velocity is < 6 cm/year before age 4 years, < 5 cm/year from age 4 to 8 years, and < 4 cm/year before puberty. Although of small stature, a child with hypopituitarism retains normal proportionality between upper and lower body segments. Skeletal maturation, assessed by bone age determination, is > 2 years behind chronologic age.

Other abnormalities may be present, depending on the underlying defect, and the child may have delayed or absent pubertal development. Weight gain may be out of proportion to growth, resulting in relative obesity. Neonates who have congenital defects of the pituitary or hypothalamus may have hypoglycemia (which also can occur in older children), hyperbilirubinemia, midline defects (eg, cleft palate), or micropenis, as well as manifestations of other endocrine deficiencies.

Growth is assessed; data for height and weight should be plotted on a growth chart (auxologic assessment) for all children. (For children 0 to 2 years, see World Health Organization [WHO] Growth Charts; for children 2 years and older, see Centers for Disease Control and Prevention [CDC] Growth Charts.)

, hypothyroidism Diagnosis Hypothyroidism is thyroid hormone deficiency. Symptoms in infants include poor feeding and growth failure; symptoms in older children and adolescents are similar to those of adults but also... read more ) and these conditions must be excluded. However, IGFBP-3 levels, unlike IGF-1, are less affected by undernutrition and allow discrimination between normal and subnormal in younger children.

Imaging studies are done when growth is abnormal; bone age should be determined from an x-ray of the left hand (by convention). In GH deficiency, skeletal maturation is usually delayed to the same extent as height. With GH deficiency, evaluating the pituitary gland and hypothalamus with MRI is indicated to rule out calcifications, tumors, and structural anomalies.

Screening laboratory tests are done to look for other possible causes of poor growth, including

Genetic testing for specific syndromes (eg, Turner syndrome Diagnosis In Turner syndrome, girls are born with one of their two X chromosomes partly or completely missing. Diagnosis is based on clinical findings and is confirmed by cytogenetic analysis. Treatment... read more

) may be indicated by physical findings or if growth pattern differs significantly from family. If GH deficiency is highly suspected, additional tests of pituitary function are done (eg, ACTH, 8 AM serum cortisol level, LH, FSH, and prolactin levels).

Because GH responses are typically abnormal in patients with diminished thyroid or adrenal function, provocative testing should be done in these patients only after adequate hormone replacement therapy.

The insulin tolerance test is the best provocative test for stimulating GH release but is rarely done because of the risks of hypoglycemia. Other provocative tests are less dangerous but also less reliable. These include tests using arginine infusion (500 mg/kg IV given over 30 minutes), clonidine (0.15 mg/m2 orally [maximum 0.25 mg]), levodopa (10 mg/kg orally for children; 500 mg orally for adults), and glucagon (0.03 mg/kg IV [maximum 1 mg]). GH levels are measured at different times after drug administration depending on the drug.

The GH response that is considered normal is somewhat arbitrary. Generally, any stimulated GH level > 10 ng/mL (> 10 mcg/L) is sufficient to rule out classic GH deficiency. GH deficiency may be considered for responses < 10 ng/mL (< 10 mcg/L; some centers use a lower cutoff, eg, 7 ng/mL [7 mcg/L]) to two pharmacologic stimuli, but results must be interpreted in the context of auxologic data. Because of the arbitrary nature of thresholds for normal results on provocative GH tests, children with otherwise unexplained short stature and normal provocative GH test results may be considered to have GH deficiency if they meet most of the following criteria:

Because GH levels rise during puberty, many children who fail provocative GH stimulation testing before puberty may have normal results after puberty or when primed with gonadal steroids. To avoid unnecessary treatment of children with constitutional delay, sex steroid priming before provocative GH testing may be considered in prepubertal boys > 11 years of age and in prepubertal girls > 10 years of age with adult height prognosis within -2 standard deviations of the reference population mean. Priming protocols for both boys and girls suggest beta-estradiol 2 mg (1 mg for body weight < 20 kg) orally on each of the two nights before the test or, for boys, a depot formulation of testosterone 50 to 100 mg IM 1 week before the test.

Provocative testing may not detect subtle defects in the regulation of GH release. For example, in children with short stature secondary to GH secretory dysfunction, results of provocative testing for GH release are usually normal. However, serial measurements of GH levels over 12 to 24 hours indicate abnormally low 12- or 24-hour integrated GH secretion. However, this test is expensive and uncomfortable and thus is not the test of choice for GH deficiency.

If diminished GH release is confirmed, tests of secretion of other pituitary hormones and (if abnormal) hormones of their target peripheral endocrine glands along with pituitary imaging studies must be done if not done previously.

Dosing of recombinant GH is usually from 0.03 to 0.05 mg/kg subcutaneously once a day. With therapy, height velocity often increases to 10 to 12 cm/year in the first year and, although it increases more slowly thereafter, remains above pretreatment rates. Therapy is continued until an acceptable height is reached or growth rate falls below 2.5 cm/year. A preparation of GH (lonapegsomatropin) is available for patients with GH deficiency who are ≥ 1 year of age who weigh at least 11.5 kg. A typical starting dosage is 0.24 mg/kg subcutaneously once/week.

It is controversial whether short children without evidence of an endocrine, metabolic, or other disease that explains the short stature should be treated with GH. These children are considered to have idiopathic short stature (ISS). ISS is defined as height 2 standard deviations (SD) below the mean for age, normal height velocity (near or at lower limit of normal), no biochemical evidence of a growth-restricting condition, and normal GH stimulation testing that excludes classic GH deficiency. Recombinant GH can be used to treat children with ISS who have a height 2.25 SD below the mean for age and a predicted adult height below the normal range (ie, < 150 cm for females and < 160 cm for males). Guidelines recommend against the routine use of GH for every child with ISS, and the decision to treat should be made on a case-by-case basis. Treatment responses are highly variable. With 5 years of treatment, some children may have a mean increase of about 5 cm in adult height, whereas other children may have no increase in adult height. A greater response to GH treatment may be expected in children with ISS based on height response in first year of treatment, age at the start of treatment (better response if treatment is started before age 9 in girls and before age 10 in boys), and change in IGF-1 level from baseline. For children who are treated, many experts recommend a trial of GH therapy for 6 to 12 months, continuing GH only if there is a doubling of or an increase of 3 cm/year over the pretreatment height velocity. Others object to this approach because it is expensive, is experimental, may lead to adverse effects, labels otherwise healthy children as abnormal, and raises ethical and psychosocial concerns that feed into the bias of “heightism.”

) should be replaced throughout childhood, adolescence, and adulthood when circulating levels of these hormones are low. Diabetes insipidus typically requires lifelong treatment with desmopressin in tablet or intranasal form ( see Treatment Treatment Diabetes insipidus results from a deficiency of vasopressin (antidiuretic hormone [ADH]) due to a hypothalamic-pituitary disorder (central diabetes insipidus) or from resistance of the kidneys... read more ). When puberty does not occur normally, treatment with gonadal sex steroids is indicated ( see Delayed Puberty Delayed Puberty Delayed puberty is absence of sexual maturation at the expected time. Diagnosis is by measurement of gonadal hormones (testosterone and/or estradiol), luteinizing hormone, and follicle-stimulating... read more ).

GH therapy in children with short stature due to therapeutic radiation of the pituitary gland for cancer carries a theoretic risk of causing cancer recurrence. However, studies have not shown a greater-than-expected incidence of new cancers or a greater recurrence rate. GH replacement can probably be safely instituted at least 1 year after the successful completion of anticancer therapy.