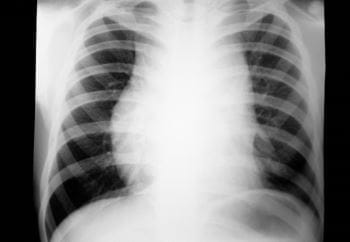 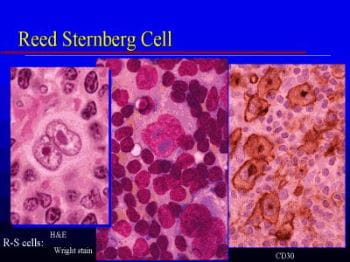 Hodgkin Lymphoma Posttreatment Surveillance
Hodgkin lymphoma is a localized or disseminated malignant proliferation of cells of the lymphoreticular system, primarily involving lymph node tissue, spleen, liver, and bone marrow. Symptoms typically include painless lymphadenopathy, sometimes with fever, night sweats, unintentional weight loss, pruritus, splenomegaly, and hepatomegaly. Diagnosis is based on lymph node biopsy. Treatment is curative in most cases and consists of chemotherapy with or without other treatment modalities, including antibody-drug conjugates, immunotherapy, and radiation therapy.

In the US, about 8,000 new cases of Hodgkin lymphoma are diagnosed annually. The male:female ratio is 1.4:1. Hodgkin lymphoma is rare before age 10 and is most common between ages 15 and 40; a 2nd peak occurs in people > 60.

The cause is unknown, but genetic susceptibility (eg, family history) and environmental associations (eg, occupation, such as woodworking); history of treatment with phenytoin, radiation therapy, or chemotherapy; infection with Epstein-Barr virus [EBV] Infectious Mononucleosis Infectious mononucleosis is caused by Epstein-Barr virus (EBV, human herpesvirus type 4) and is characterized by fatigue, fever, pharyngitis, and lymphadenopathy. Fatigue may persist weeks or... read more

) play a role. Risk is slightly increased in people with

Symptoms and Signs of Hodgkin Lymphoma

Most patients with Hodgkin lymphoma present with painless cervical or axillary adenopathy. Although the mechanism is unclear, pain rarely may occur in diseased areas immediately after drinking alcoholic beverages, sometimes providing an early indication of the diagnosis.

Other manifestations develop as the disease spreads through the reticuloendothelial system, generally to contiguous sites. Intense pruritus refractory to usual therapies may occur early. Constitutional symptoms include fever, night sweats, and loss of appetite resulting in unintentional weight loss (> 10% of body weight in previous 6 months), which may signify involvement of internal lymph nodes (mediastinal or retroperitoneal), viscera (liver), or bone marrow. Splenomegaly is often present; hepatomegaly is unusual. Pel-Ebstein fever (a few days of high fever regularly alternating with a few days to several weeks of normal or below-normal temperature) occasionally occurs. Cachexia is common as disease advances.

, or leukemia Overview of Leukemia Leukemia is a malignant condition involving the excess production of immature or abnormal leukocytes, which eventually suppresses the production of normal blood cells and results in symptoms... read more . Similar chest x-ray findings can result from lung cancer Lung Carcinoma Lung carcinoma is the leading cause of cancer-related death worldwide. About 85% of cases are related to cigarette smoking. Symptoms can include cough, chest discomfort or pain, weight loss... read more

. Evaluation of a mediastinal mass Diagnosis Mediastinal masses are caused by a variety of cysts and tumors; likely causes differ by patient age and by location of the mass (anterior, middle, or posterior mediastinum). The masses may be... read more is discussed elsewhere.

Chest x-ray or physical examination abnormalities should be confirmed with CT or positron emission tomography (PET) scan of the chest in order to choose the most efficient biopsy procedure. If only mediastinal nodes are enlarged, mediastinoscopy, video-assisted thorocoscopy (VATS), or a Chamberlain procedure (a limited left anterior thoracostomy allowing biopsy of mediastinal lymph nodes inaccessible by cervical mediastinoscopy) may be indicated. CT-guided core needle biopsy may also be considered; fine-needle aspiration is often inadequate for the diagnosis of Hodgkin lymphoma.

, and classic Hodgkin lymphoma from the nodular lymphocyte-predominant type.

Elevated serum alkaline phosphatase levels may be present, but elevations do not always indicate bone marrow or liver involvement. Increases in leukocyte alkaline phosphatase, serum haptoglobin, and other acute-phase reactants usually reflect the presence of inflammatory cytokines from active Hodgkin lymphoma. These tests are sometimes done to evaluate non-specific symptoms and can suggest Hodgkin lymphoma; they are not done on all lymphoma patients. Erythrocyte sedimentation rate (ESR), an indirect marker of inflammation, is more commonly ordered and predicts a less favorable outcome.

Other tests are done depending on findings (eg, MRI for symptoms of cord compression). A bone marrow biopsy is usually only done if a PET/CT scan is not obtained and if the findings might alter management. Other recommended tests include cardiac ejection fraction if the use of anthracyclines is anticipated and pulmonary function tests if bleomycin is being considered.

Laparotomy is not required for staging.

About 85 to 90% of patients with limited-stage classic Hodgkin lymphoma are cured compared with 75 to 80% of patients with advanced-stage disease. Limited-stage disease is frequently subdivided into favorable and unfavorable prognostic groups. Unfavorable disease is based on risk factors, for example, the presence of bulky disease, ≥ 4 nodal sites involved, age > 50, and erythrocyte sedimentation rate (ESR) > 50 mm/hour with no B symptoms or > 30 mm/hour with B symptoms (weight loss, fever, or night sweats). Risk factors in advanced-stage Hodgkin lymphoma include male sex, age > 45 years, and signs of tumor-induced inflammation (low albumin, anemia, leukocytosis, and lymphopenia). However, which risk factors are recommended is still subject to revision. Patients who do not achieve complete remission with treatment or who relapse within 12 months have a poor prognosis.

The choice of treatment modality is complex and depends on the precise stage of disease. Before treatment and when applicable, men should be offered sperm banking, and women should discuss options to preserve fertility with their oncologists and a fertility specialist.

Limited-stage disease is generally treated with an abbreviated chemotherapy regimen of doxorubicin (Adriamycin), bleomycin, vinblastine, and dacarbazine (ABVD) with or without radiation therapy Radiation Therapy for Cancer Radiation therapy can cure many cancers (see also Overview of Cancer Therapy), particularly those that are localized or that can be completely encompassed within a radiation field. Radiation... read more . In patients with bulky mediastinal disease, chemotherapy may be of longer duration or of a different type, and radiation therapy is often included.

Advanced-stage disease may be treated based on the findings of one of two large randomized trials. In the RATHL (Response-Adapted Therapy in Advanced Hodgkin Lymphoma) trial, patients were treated with ABVD, and those who had a negative PET scan after 2 cycles received 4 additional cycles with AVD (no bleomycin), while those who had a positive PET scan were escalated to BEACOPP (bleomycin, etoposide, doxorubicin, cyclophosphamide, vincristine, procarbazine, and prednisone—1 Treatment references Hodgkin lymphoma is a localized or disseminated malignant proliferation of cells of the lymphoreticular system, primarily involving lymph node tissue, spleen, liver, and bone marrow. Symptoms... read more

Brentuximab vedotin and the checkpoint inhibitors nivolumab and pembrolizumab are used for treatment of patients with Hodgkin lymphoma who have received at least 2 prior forms of therapy.

All patients who are not PET-negative at the end of induction therapy should have a biopsy or be followed closely with serial imaging; if residual disease is present, additional treatment is necessary. Once in remission, patients should be followed for signs and symptoms of relapse for 5 years. Those with manifestations of relapse should have imaging with PET/CT or CT alone. Routine, scheduled imaging in asymptomatic patients is no longer considered mandatory. For a schedule of posttreatment surveillance, see table Hodgkin Lymphoma Posttreatment Surveillance Hodgkin Lymphoma Posttreatment Surveillance Hodgkin lymphoma is a localized or disseminated malignant proliferation of cells of the lymphoreticular system, primarily involving lymph node tissue, spleen, liver, and bone marrow. Symptoms... read more

The following is an English language resource that provides information for clinicians and support and information for patients. THE MANUAL is not responsible for the content of this resource.