Evaluation of the Pulmonary Patient

The history can often establish whether symptoms of cough Cough in Adults Cough is an explosive expiratory maneuver that is reflexively or deliberately intended to clear the airways. It is one of the most common symptoms prompting physician visits. (See also Cough... read more , dyspnea Dyspnea Dyspnea is unpleasant or uncomfortable breathing. It is experienced and described differently by patients depending on the cause. Although dyspnea is a relatively common problem, the pathophysiology... read more , chest pain Chest Pain Chest pain is a very common complaint. Many patients are well aware that it is a warning of potential life-threatening disorders and seek evaluation for minimal symptoms. Other patients, including... read more , wheezing Wheezing Wheezing is a relatively high-pitched whistling noise produced by movement of air through narrowed or compressed small airways. It is a symptom as well as a physical finding. Prolonged expiratory... read more , stridor Stridor Stridor is a high-pitched, predominantly inspiratory sound. It is most commonly associated with acute disorders, such as foreign body aspiration, but can be due to more chronic disorders, such... read more , and hemoptysis Hemoptysis Hemoptysis is coughing up of blood from the respiratory tract. Massive hemoptysis is production of ≥ 600 mL of blood (about a full kidney basin’s worth) within 24 hours. Most of the lung’s blood... read more are likely to be pulmonary in origin. A history should also establish whether constitutional symptoms, such as fever, weight loss, and night sweats, are present. Other important information includes

Physical examination includes an assessment of general appearance. Discomfort and anxiety, body habitus, and the effect of talking or movement on symptoms (eg, inability to speak full sentences without pausing to breathe) all can be assessed while greeting the patient and taking a history and may provide useful information relevant to pulmonary status. A thorough pulmonary examination constitutes inspection, auscultation, and chest percussion and palpation. Patients with lung disease should undergo a complete physical examination, including examination of lymph nodes, skin, and the musculoskeletal system.

Inspection should focus on

A sign of hypoxemia is cyanosis (bluish discoloration of the lips, face, or nail beds), which requires the presence of at least 5 g/dL of unsaturated hemoglobin and thus signifies low arterial oxygen saturation (< 85%); the absence of cyanosis does not exclude the presence of hypoxemia.

sometimes brace their arms against their legs or the examination table while seated (ie, tripod position) in a subconscious effort to provide more leverage to accessory muscles and thereby enhance respiration. Intercostal retractions (inward movement of the rib interspaces) are common among infants and older patients with severe airflow limitation. Paradoxical breathing (inward motion of the abdomen during inspiration) signifies respiratory muscle fatigue or weakness.

Signs of possible chronic pulmonary disease include clubbing, barrel chest (the increased anterior-posterior diameter of the chest present in some patients with emphysema), and pursed lip breathing.

). “Sponginess” of the nail bed beneath the cuticle also suggests clubbing.

Clubbing is most commonly observed in patients with lung cancer Lung Carcinoma Lung carcinoma is the leading cause of cancer-related death worldwide. About 85% of cases are related to cigarette smoking. Symptoms can include cough, chest discomfort or pain, weight loss... read more

but is an important sign of chronic pulmonary disease, such as cystic fibrosis Cystic Fibrosis Cystic fibrosis is an inherited disease of the exocrine glands affecting primarily the gastrointestinal and respiratory systems. It leads to chronic lung disease, exocrine pancreatic insufficiency... read more

, inflammatory bowel disease Overview of Inflammatory Bowel Disease Inflammatory bowel disease (IBD), which includes Crohn disease and ulcerative colitis, is a relapsing and remitting condition characterized by chronic inflammation at various sites in the gastrointestinal... read more , and cirrhosis Cirrhosis Cirrhosis is a late stage of hepatic fibrosis that has resulted in widespread distortion of normal hepatic architecture. Cirrhosis is characterized by regenerative nodules surrounded by dense... read more . Clubbing occasionally occurs with osteoarthropathy and periostitis (primary or hereditary hypertrophic osteoarthropathy); in this instance, clubbing may be accompanied by skin changes, such as hypertrophied skin on the dorsa of the hands (pachydermoperiostosis), seborrhea, and coarse facial features. Digital clubbing can also occur as a benign hereditary abnormality that can be distinguished from pathologic clubbing by the absence of pulmonary symptoms or disease and by the presence of clubbing from an early age (by patient report).

Barrel chest is the increased anterior-posterior diameter of the chest present in some patients with emphysema.

In pursed lip breathing, the person exhales through tightly closed lips and inhales through the nose with the mouth closed. This maneuver increases pressure in the airways to keep them open and thereby decrease gas trapping.

Chest wall deformities, such as pectus excavatum (a sternal depression usually beginning over the midportion of the manubrium and progressing inward through the xiphoid process) and kyphoscoliosis, may restrict respirations and exacerbate symptoms of preexisting pulmonary disease. These abnormalities can usually be observed during careful examination after the patient's shirt is removed. Inspection should also include an assessment of the abdomen and the extent of obesity, ascites, or other conditions that could affect abdominal compliance.

Jugular venous distension Neck veins Complete examination of all systems is essential to detect peripheral and systemic effects of cardiac disorders and evidence of noncardiac disorders that might affect the heart. Examination... read more

, or a combination and should prompt a search for other signs of cardiac disorder (eg, 3rd heart sound [S3] gallop, murmurs, dependent edema).

Lung auscultation is arguably the most important component of the physical examination. All fields of the chest should be listened to, including the flanks and the anterior chest, to detect abnormalities associated with each lobe of the lung. Features to listen for include

The character and volume of breath sounds are useful in identifying pulmonary disorders. Vesicular breath sounds are the normal sounds heard over most lung fields. Bronchial breath sounds are slightly louder, harsher, and higher pitched; they normally can be heard over the trachea and over areas of lung consolidation, such as occur with pneumonia Overview of Pneumonia Pneumonia is acute inflammation of the lungs caused by infection. Initial diagnosis is usually based on chest x-ray and clinical findings. Causes, symptoms, treatment, preventive measures, and... read more .

Adventitious sounds are abnormal sounds, such as crackles, rhonchi, wheezes, and stridor.

Vocal sounds are heard during auscultation while patients vocalize.

Friction rubs are grating or creaking sounds that fluctuate with the respiratory cycle and sound like skin rubbing against wet leather. They are a sign of pleural inflammation and are heard in patients with pleuritis Viral Pleuritis Viral pleuritis is a viral infection of the pleurae. Viral pleuritis is most commonly caused by infection with coxsackie B virus. Occasionally, echovirus causes a rare condition known as epidemic... read more or empyema and after thoracotomy.

Inspiratory to expiratory (I:E) ratio is normally 1:2 but is prolonged to ≥ 1:3 when airflow is limited, such as in asthma Asthma Asthma is a disease of diffuse airway inflammation caused by a variety of triggering stimuli resulting in partially or completely reversible bronchoconstriction. Symptoms and signs include dyspnea... read more and COPD Chronic Obstructive Pulmonary Disease (COPD) Chronic obstructive pulmonary disease (COPD) is airflow limitation caused by an inflammatory response to inhaled toxins, often cigarette smoke. Alpha-1 antitrypsin deficiency and various occupational... read more

, even in the absence of wheezing.

Percussion is the primary physical maneuver used to detect the presence and level of pleural effusion Pleural Effusion Pleural effusions are accumulations of fluid within the pleural space. They have multiple causes and usually are classified as transudates or exudates. Detection is by physical examination and... read more

Palpation includes tactile fremitus (vibration of the chest wall felt while a patient is speaking); it is decreased in pleural effusion and pneumothorax Pneumothorax Pneumothorax is air in the pleural space causing partial or complete lung collapse. Pneumothorax can occur spontaneously or result from trauma or medical procedures. Diagnosis is based on clinical... read more

and increased in pulmonary consolidation (eg, lobar pneumonias). Point tenderness on palpation may signal underlying rib fracture Rib Fracture One or more ribs can be fractured due to blunt chest injury. (See also Overview of Thoracic Trauma.) This x-ray of the chest shows multiple fractures to the right ribs (seen on left). Typically... read more 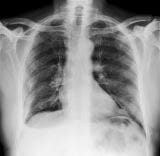 , or costochondral dislocation or inflammation.